Having won the Canadian Science Writers Book of the Year Award for Bee Time: Lessons From the Hive, Winston now has Governor General's Non-Fiction Award. 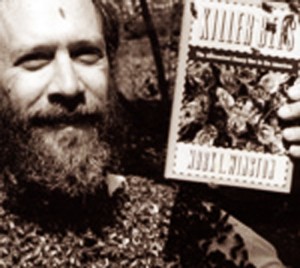 Mark Winston has become one of the world's leading spokesman for and about bees.

“Honeybees are hurting,” he says, “with one-third of all colonies dying annually across most of the world.”

In Bee Time (Harvard University Press),Winston gathers his observations and opinions about bees drawn from three decades of study, including his advice as to how humans should modify their behavior in relations with the natural world in general, and bees in particular. Winston, a longtime SFU professor who manages a website called The Hive, stresses how “honeybees represent a pinnacle of animal sociality.”

Coincidentally Mark Winston was recently profiled as one of British Columbia’s Most Influential Scientists by The Province newspaper in July, 2015. “Honeybees are hurting,” Winston wrote in The Scotsman in December of 2014, “with one-third of all colonies dying annually across most of the world. Beekeepers can barely maintain hive numbers in their apiaries, splitting their hives each year to make up for losses and then doing it again the next year, and the next… We can save the bees by reducing pesticide use and improving the habitats they forage in. By collaborating in their survival we might learn some valuable lessons about our own.” According to publicity materials, Winston explains how bees process information, structure work, and communicate, and examines how corporate boardrooms are using bee societies as a model to improve collaboration. He investigates how bees have altered our understanding of agricultural ecosystems and how urban planners are looking to bees in designing more nature-friendly cities.

At a time when bee populations are diminishing, particularly due to the widespread use of pesticides, Winston’s GG-winner is one of three new books from B.C. authors about books. The others are beekeeper Merrie-Ellen Wilcox’s What’s the Buzz: Keeping Bees in Flight (Orca 2015) and The Summer We Saved the Bees by Robin Stevenson. The latter young adult novel was featured on the cover of BC BookWorld’s Autumn 2015 issue. As an SFU biologist, Mark Winston drew upon his field work in South America to put the behaviour of ‘Africanized bees’ into perspective for Killer Bees: The Africanized Honey Bee in the Americas. His previous book, also from Harvard University Press, was The Biology of the Honey Bee. Winston also published Travels in the Genetically Modified Zone: Room for Respectful Conversation, about the face-off between natural food activists and the high-tech companies who grow tomatoes in research labs. Winston searches for the middle ground in the increasingly contentious debate about genetically modified foods. Mark Winston was born in Brooklyn, New York and came to B.C. in 1980. He received the 2001 Academic of the Year Award from the Confederation of University Faculty Associations of British Columbia. Dr. Mark L. Winston, FRSC, is currently Professor and Senior Fellow, Centre for Dialogue; Professor, Department of Biological Sciences, Simon Fraser University, Harbour Centre.

BC Business, 5 August 2014, “Buzz Builds for Ban on Pesticides Linked to Bee Die-offs”

Minneapolis Star-Tribune, 27 September 2014, “A Scientists Aim: Save the Bees”

Alberta Farmer, 7 January 2015, “Neonics Are An Issue, and Also An Easy Target”

Washington Post, 19 May 2015, “How the White House Plans to Help the Humble Bee Maintain its Buzz”

Institute for Advanced Study, University of Minnesota, 2 August 2015, Video interview, as part of the inaugural events for the IAS Bee Arts Collaborative