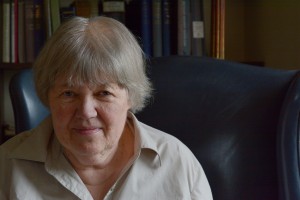 Hardly anyone realizes it, and nobody has made it public knowledge, but for half-a-century French Canadians were the largest group of newcomers west of the Rockies. Ironically, in a place later to be called British Columbia, it was mainly francophones who facilitated the early overland crossings into the Pacific Northwest. It was francophones who chiefly drove the fur economy, initiating non-wholly-indigenous agricultural settlement and easing relations with indigenous peoples.

The largely unsung work of these men–often in league with Scots–ensured that, when the region was divided in 1846, the northern half would go to Britain, giving Canada its Pacific shoreline. In Jean Barman’s ground-breaking French Canadians, Furs, and Indigenous Women in the Making of the Pacific Northwest (UBC Press 2014), she rewrites the history of the Pacific Northwest from the perspective of these little-known French Canadians, emphasizing the role that indigenous women played in encouraging them to stay, and identifying their descendants.

When French Canadian fur trappers reached the Pacific Northwest Coast during the 1790s through to the 1840s, their population grew to approximately 1,240, thereby constituting the largest group of newcomers to the region. Jean Barman argues that they changed the face of this history in five important ways: they were responsible for the early overland crossings; they drove the fur economy; they were the first non-indigenous people in the area to farm; they eased relations with the indigenous peoples; and, perhaps most significantly, they contributed to the 1846 division of the Pacific Northwest, giving Canada its Pacific shoreline.

As Jean Barman notes, “small numbers of people can effect big changes,” and she doesn’t see the story stopping here.

“Jean Barman has devoted her life to uncovering the untold stories that conventional historians have overlooked.” —BC Bookworld

“This is a massive narrative undertaking by a historian at the height of her powers.” —Heather Devine, BC Studies

“This tour de force charts in both broad strokes and careful detail the impact of French Canadian men and their Aboriginal wives and families.” —Carolyn Podruchny, author of Making the Voyageur World

“History is usually written by the winners. Their lives comprise the archival collections, and historically these have been white men enjoying political and economic privilege. So long as we rely on the materials at hand, we keep telling the same old stories.” — Jean Barman (BCBW, Volume 23, No 3, Autumn 2007)

Jean Barman is the 21st recipient of the George Woodcock Lifetime Achievement Award for an outstanding literary career in British Columbia.

Since her arrival in B.C. in 1971, Jean Barman has become one of the most essential writers of the province, contributing The West Beyond The West: A History of British Columbia (1991). As one of the few comprehensive, modern histories of the province, it has mostly replaced Margaret Ormsby’s work as the standard text on the subject. In much of her work Barman has shown a predilection to examine the lives of women. Her biography of Constance Lindsay Skinner recalls the prolific journalist, born in B.C. in 1877, who managed to produce a wide range of poetry, plays, short stories, histories, reviews and children’s novels. [See Skinner entry] Sojourning Sisters, for which she received the Lieutenant Governor’s Medal for historical writing, recalls the lives of two Scottish Presbyterian sisters who came from Nova Scotia in the late 1880s to teach. Because one of the sisters subsequently lived primarily in Ontario, they wrote more than 500 letters about their ‘sojourns’ that included stints in the Nicola Valley, Kamloops, Campbell Creek, Salmon Arm, Rossland, the Kootenays, Saltspring Island and Victoria. Barman has also paid tribute to the working class family of Portuguese Joe Silvey and the half-Hawaiian matriarch Mariah Mahoi, followed by Stanley Park’s Secret: Forgotten Families of Whoi Whoi, Kanaka Ranch, and Brockton Point (Harbour, 2005), a second volume that recovers the Hawaiian heritage of Canada’s West Coast. It was co-winner of the 2006 City of Vancouver Book Award. [See press release below] BC 150 Years (Harbour 2008) was nominated for the BC Booksellers’ Choice Award in Honour of Bill Duthie.

A UBC historian in the Department of Educational Studies, Jean Barman was born in Stephen, Minnesota. In keeping with her position in the Education department at UBC, her first book about B.C. was Growing Up British in British Columbia: Boys in Private School. She also co-edited Vancouver Past: Essays in Social History with UBC history professor Robert A.J. McDonald; Indian Education in Canada, with Don McCaskill and Yvonne Hebert; and First Nations Education in Canada: The Circle Unfolds, with Marie Battiste, a member of the Mi’kmaq Nation. Active in the B.C. Heritage Trust and other historical organizations, she has been a catalyst for countless literary and historical projects by others, adding both intellectual input and generous advice. With Linda Hale she co-produced a 1991 bibliography of B.C.’s local history books for B.C. Heritage Trust which included 800 communities. Jean Barman was inducted as a Fellow of the Royal Society of Canada in 2002, in recognition for her prolific work in Canadian history, particularly in the history of the West. She is married to historian Roderick Barman. They live in Vancouver.

Review of the author’s work by BC Studies:
British Columbia: Spirit of the People
Children, Teachers and Schools in the History of British Columbia
Constance Lindsay Skinner: Writing on the Frontier
Growing Up British in British Columbia: Boys in Private School
Indian Education in Canada. Volume 1: The Legacy
Indigenous Women and Feminism: Politics, Activism, Culture
Leaving Paradise: Indigenous Hawaiians in the Pacific Northwest, 1787-1898
Maria Mahoi of the Islands & The Remarkable Adventures of Portuguese Joe Silvey
Sojourning Sisters: The Lives and Letters of Jessie and Annie McQueen
Stanley Park’s Secret: The Forgotten Families of Whoi Whoi, Kanaka Ranch and Brockton Point

French Canadians, Furs, and Indigenous Women in the Making of the Pacific Northwest (UBC Press 2014)

Sojourning Sisters: The Lives and Letters of Jessie and Annie McQueen (Toronto: University of Toronto Press, 2003)

The West Beyond the West: A History of British Columbia (Revised edition. Toronto: University of Toronto Press, 1996, orig., 1991)

Edited with Neil Sutherland and J. Donald Wilson, Children, Teachers and Schools in the History of British Columbia (Calgary: Detselig, 1995)

Edited with Yvonne Hébert and Don McCaskill, Indian Education in Canada. Vol l: The Legacy and vol. 2: The Challenge. Vancouver: UBC Press, 1986 and 1987. French Canadians, Furs, and Indigenous Women in the Making of the Pacific Northwest  (UBC Press)