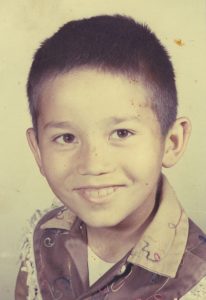 Four of this year’s thirty Governor General’s Award nominees in English were published in B.C.; two others are by B.C.-related authors. Two winners this year were both written and published in B.C. – a rarity. 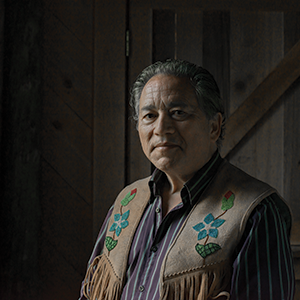 Darrel J. McLeod of Sooke has won the G.G. Award for non-fiction for his memoir of resilience as a Cree from treaty eight territory in Northern Alberta. His Mamaskatch: A Cree Coming of Age is published by Douglas & McIntyre of Madeira Park. Prior to his retirement, McLeod was a chief negotiator of land claims for the federal government and executive director of education and international affairs with the Assembly of First Nations. Fluent in French and Spanish, he holds degrees in French Literature and Education from UBC. McLeod now writes, sings and plays jazz guitar. His next book will be a follow up to Mamaskatch. [photo by Ilja Herb] 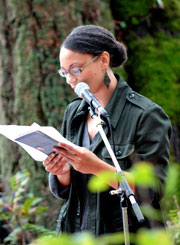 Cecily Nicholson of Burnaby has received the G.G. Award for poetry for Wayside Song. Published by Talonbooks of Vancouver, it’s an account of economy travel on North American roadways as she imagines the transient labour of her black birth father in the Great Lakes region of two nation states, amid a landscape of forgetting. Nicholson looks to Anishinaabeg, Haudenosaunee, and Attawandaron presence and histories – to Indigenous memory – to fuel her poetic practice.

Judges Garry Gottfriedson, Sachiko Murakami and Patrick Warner concluded, “In this hypnotic suite of long poems, Cecily Nicholson makes room, offering glimpses and echoes of the Canadian landscape as she explores ideas of borders, identity, industry and travel. She offers a catalogue of impressions, a collage of the ephemeral, held together by image and the pulsing phrase that stays with you long after the journey’s over.”

Raised a member of the Seabird Island Band in B.C., Terese Marie Mailhot earned a GG nomination for her coming of age memoir Heart Berries (Doubleday $25) — written in Indiana — after overcoming a dysfunctional family. Hospitalized and facing a dual diagnosis of Post Traumatic Stress Disorder and Bipolar II, she writes her way out of trauma. It’s a memorial for her mother, a social worker and prisoners’ rights activist, and a coming to terms with her abusive and often drunken father who was murdered under mysterious circumstances. 9780385691147

Reviewed in BCBW by Joan Givner, Carys Cragg’s memoir Dead Reckoning: How I Came to Meet the Man Who Murdered My Father by Carys Cragg (Arsenal Pulp Press $19.95) was also nominated for a G.G. in non-fiction. More than twenty years after her father is murdered, Cragg decided to meet and confront his convicted killer in prison. After exchanging many letters with the convict, she travels to Alberta for a day-long, face-to-face meeting in the minimum security prison at Drumheller. 9781551526973 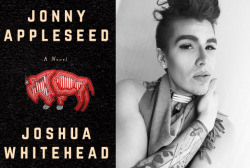 Poet Joshua Whitehead’s debut novel, Jonny Appleseed (Arsenal $17.95), received a G.G. nomination for Fiction. It’s the tale of a Two-Spirit Indigiqueer cybersex worker who fetishizes himself in order to make a living in the big city. Jonny has one week before he must return to the “rez”–and his former life–to attend the funeral of his stepfather. This is also the first B.C.-published fiction in many a year—since David Chariandy’s Soucouyant in 2007 and Claire Mulligan’s The Reckoning of Boston Jim in 2008—to make it onto the Giller Prize longlist. Now Arsenal has partnered with VS Books for a new imprint to boost young writers who are Indigenous, Black of people of colour. 9781551527253 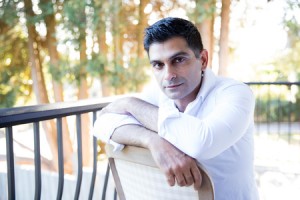 Published on September 25, 2018, Anosh Irani’s play The Men in White (Anansi $19.95), was one of five plays that were announced as GG finalists for Drama on October 3rd.  Directly influenced by Irani’s own cricket club experiences in Vancouver and his visit to a chicken slaughterhouse in Bombay (not Mumbai), this story about two brothers explores the modern immigrant experience and Islamophobia. This play premiered at the Arts Club Theatre where Irani was first afforded a foothold by Arts Club mentor Bill Millerd. It was nominated for three Jessie Richardson Awards including Outstanding Original Script. His work has been translated into eleven languages. 9781487004736