As Italian as possible 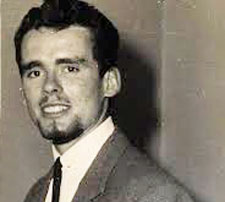 As Thomson remembers in his book about the trip, Florence, Dante and Me (Godwin Books $25), “Many of my generation were enchanted by the beauty and glamor of Italy, not to mention her distinctive style that could be seen even in everyday things such as Vespa scooter, Olivetti typewriters and “Vesuvius” espresso coffee machines. Italy had panache and style.” He got some stimulation from UBC, which he also refers to as “very elitist in that era,” where he was able to see Spanish guitarist Andres Segovia, folk singer Pete Seeger, flamenco dancer Jose Greco, and the Red Army Chorus at a small theater called “The Old Auditorium”. Humorously, Thomson describes taking ballroom dance classes to fulfill the physical education requirements of the university from a dance teacher who was, “always in a tux, even for his 8 a.m. dance class.”

It was hip to be interested in all things European and Thomson was studying European languages. “Such study whetted one’s appetite for Europe and many students travelled there as soon as they could,” he writes. “Some even went so far as to assume a new identity. I realize now that some degree this is what I was doing: becoming as Italian as possible.”

What’s intriguing about Thomson’s writing approach is that he bases his text on a cache of almost 50 letters that he wrote to his fiancée back in Vancouver. He wanted to keep the flame of his love alive as well as to record his experiences and reflect on them. These missives capture the freshness of a young man’s desire to absorb all things Italian. The fiancée shares highlights from the letters with other students and professors, making them notorious at the time. “When I realized who was reading my letters I took extra care with them,” Thomson says in his introduction.

Many of the letters chronicle his delight in discovering the arts such as the paintings of Botticelli and Caravaggio; sculptures by Michelangelo and Cellini; ancient architecture in Rome and Pompeii; opera houses like La Pergola and San Carlo; and popular singers of the era including Peppino di Capri and Mina. And Thomson describes his thrill to hear dramatic readings of the poet simply known as Dante.

Many of his passages comment on Italian attitudes towards fashion, friendship and child rearing. The letters describe in detail the many people Thomson befriended: Franco, a retired Colonel; Gino, a violinist from Naples; and Ede, a woman who shares his love of opera and lyric poetry.

Readers get to share in the young Thomson’s glee when he buys fine Italian clothing. “I finally got my suit and topcoat,” he writes in a letter dated March 15, 1961. “Pure wool and they fit like a glove. The colors are so rich! God, they’re lovely!”

He laments “pseudo-bohemianism,” which he describes as, “people who think they’re European and cool just because they eat cheese and baguettes and drink wine.”

Thomson’s book is a fascinating glimpse into what it was like to be young and in Italy in 1960-61. He also advises people to learn the language of the country they travel to, as, “such knowledge will bring understanding of the culture and enable them to connect with people in a more meaningful way.”

But ultimately, spending time abroad, especially as young adult, enriches one’s life. “One of the unexpected benefits of my year in Italy was to see my life in a more moral and spiritual way. I gained insights into my upbringing and education and began to see that they had molded me in a very narrow way.”

The letters however, didn’t achieve Thomson’s goal of keeping his fiancée from straying. Upon his return to Vancouver, he discovers she has found a new love. He is discrete though, and never reveals her name and omits all writings as he delicately puts it, “of a private nature.” 978-0-9958760-0-2