The Rise and Fall of Emilio Picariello by Adriana Davies reveals prejudice against Italians in the Kootenays. 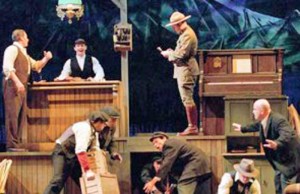 The original opera Filumena was performed at the Banff Centre, 2003. Don Lee photo.

REVIEW: The Rise and Fall of Emilio Picariello

When authorities charged Emilio Picariello and Filumena Lassandro with the murder of Alberta Provincial Police Constable Stephen Lawson on 21 September 1922 in the Crowsnest Pass town of Coleman, Alberta, the cards were stacked against the two not because they were guilty, although they may have been, but because they were Italians.

Adriana A. Davies makes this point on several occasions in her thoroughly researched book The Rise and Fall of Emilio Picariello. Italians had been the victims of racism and stereotyping in Europe as far back as the sixteenth century when the Reformation divided the continent into two camps and northern Protestant nations had deemed Roman Catholic Italy as corrupt.

Italy was not a unified nation at that time, but even after unification in the mid-nineteenth century, political misrule and agricultural misuse left Italian peasants so poor that they were forced to emigrate in numbers that would eventually make the nation the largest exporter of its citizens per capita of any country in the world.

So desperate were Italian immigrants in the New World that they were more likely to become strikebreakers, which did little to endear them to fledgling unionists. Adding to their unpopularity in Canada was the fact that successive federal governments had declared Italians to be “non-preferred” immigrants. But Italians knew how to work hard. And Emilio Picariello was a good example of how successful a hard worker could become. By the time he arrived in Fernie, British Columbia, via Eastern Canada with his wife and children in 1911, he had learned to speak English fluently and already owned two businesses.

Although Fernie was barely a decade old in 1911, the city had been destroyed twice by fire and had suffered two catastrophic coalmine explosions. But Picariello saw opportunity everywhere he looked. In the course of the next few years he established a grocery, manufactured and sold ice and cigars, bought and sold produce, and dealt in hay.

Picariello hired women to make ice cream and men to deliver it to places as far east as Coleman and Blairmore in Alberta. He established a garage to service his delivery vehicles and hired an Italian mechanic to do the repairs. He collected empty bottles and sold them to breweries. And he sold homemade liquor, which he had distilled under the garage and stored in tunnels dug for the purpose.

With a fleet of delivery vehicles and a network of customers as far away as Alberta, Idaho, and Montana, Picariello was ready to take his legitimate business activities to the shady side when Alberta (1916) and British Columbia (1917) passed laws prohibiting the sale of liquor, and the United States followed suit in 1919. In 1921, when British Columbia repealed prohibition, it became legal again for Picariello to sell liquor, but he was on the wrong side of the law as soon as he took the booze across any borders. And Fernie was in the landlocked East Kootenay, readily accessible to Alberta, Montana, and Idaho.

At this time Fernie became the source of alcohol for the Crowsnest Pass, southern Alberta, and adjacent American states. The three kingpins in the manufacture and transportation of illegal liquor were Picariello and the colourfully-named Mr. Big (Jack Wilson) in Fernie and Mr. R. (Mark Rogers, “the King of the Bootleggers”) in Lethbridge.

They hid their hooch in railway coal cars or in powerful automobiles and moved it by rail or on rough back roads. Picariello’s cars were McLaughlin Sixes, well-built and fast, but his competitors were harassing his suppliers. He and his men began to carry guns on liquor delivery runs. As the threat of violence escalated, municipal and national police forces on both sides of the provincial border attempted to pin something on Picariello.

Nonetheless the Italian bootlegger was a popular man in the Crowsnest Pass. He was well known in Fernie for his philanthropy. His businesses employed several Italians; his illegal liquor business was an open secret in the immigrant community. And he was not the only bootlegger in town. His Achilles heel was his son, Steve (Stefano). On a tragic day in September of 1922, he thought that Steve, who had been shot in the wrist, had possibly been killed. Filumena Lassandro, a Fernie coal miner’s daughter who was working as a maid or nanny for the family, happened to be with Picariello when he encountered and shot Constable Lawson.

Author Adrianna Davies makes a convincing case for the possibility that anti-Italian sentiment was a factor in the events leading up to the murder and that Picariello’s chief rivals in the bootlegging business were probably helping the police as they attempted to catch him red-handed. She writes, “It would appear that the ‘heavyweights’ in the bootlegging racket were mostly of British descent and resented an immigrant upstart who had prospered to an amazing extent in his adoptive country.” The arrest and conviction of Picariello and Lassandro, their subsequent unsuccessful court appeals, and their ultimate executions by hanging at Fort Saskatchewan makes for a lively and tragic story. Davies tells it in much more detail than has been possible in previous books because of her access to the defence counsel’s papers and her interviews with the Picariello family.

But as so often happens when research material is abundant, Davies has sacrificed story for excessive detail. Researchers and genealogists will delight in the detail and the inclusion in the text of actual letters and documents; casual readers will find that this detail is sometimes repetitious and slows down the pace of the story. They will wish that Davies had used her knowledge of the material to summarize much of it and quoted directly only occasionally for extra effect.

Even after the two defendants had been executed, rumours continued to fly, including the charge that they had been members of an Italian murder society like the Black Hand. Defence counsel John Cameron dismissed the charge as “the crowning absurdity in a case fraught with misapprehension and mistakes.”

Adriana Davies has done much to lessen that misapprehension. “In a very real sense,” she concludes, “each generation reinvents history based on their vision of today [and] I hope that I’ve provided a more complex, and yet balanced, view of events.”

Her thorough research has indeed clarified the circumstances of the murder of Lawson, the trial of Picariello and Lassandro, and the character of the brief prohibition era in B.C.

[In 2003, the opera Filumena by composer John Estacio and librettist John Murrell premiered in Calgary and was performed that year at the Banff Centre for the Arts.] Lynne Bowen is the author of seven books: Boss Whistle, The Coal Miners of Vancouver Island Remember; Three Dollar Dreams; Muddling Through, The Remarkable Story of the Barr Colonists; Those Lake People, Stories of Cowichan Lake; Robert Dunsmuir, Laird of the Mines, Whoever Gives Us Bread, The Story of Italians in British Columbia and Those Island People. Among the awards her books have won are the Hubert Evans Non-Fiction Prize, the Lieutenant-Governor’s Prize for Writing British Columbia History and the F.G. Bressani Literary Prize. Her other writing includes video scripts, magazine articles and the column “Those Island People” for the Times Colonist in Victoria. She was the Rogers Communications Co-Chair of Creative Non-Fiction Writing at UBC from 1992 to 2006.

2 Responses to “Fernie fiasco results in book and opera”