Aikido from A to Zen 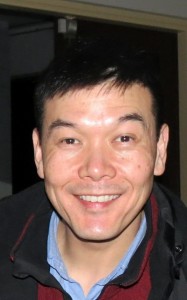 Developed by O Sensei Ueshiba Morihei through the 1920s and 1950s, Aikido is a non-aggressive martial way of self-defence that begins with nurturing the martial artist from the inside out through discipline, respect, etiquette, and repetitive practice. Rafael Oei’s Basic Steps to Aikido (2015) brings the aspiring aikido student and inquiring parent through basic concepts, philosophy, etiquette and techniques of Aikido. When it was published, Rafael Oei was a music teacher (a member of the BCRMTA), an aikido sensei (Ueshiba Aikido, Victoria), and a music director at the Sacred Heart Church in Victoria. He received a Ph.D from the University of South Australia in August 2013 on research covering organisational and communications re-structuring in a digital broadcasting environment.

Born on June 19, 1964 in Singapore, Rafael Oei first appeared on Singapore television at age nine, in a children’s game show, and then with the Singapore Children’s Choir. He went on to a career in radio and television broadcasting after graduating from the University of Warwick, England with a BA in Theatre Studies and the Dramatic Arts. “Not many people know that the first language of Singapore is English,” he says.

In his broadcasting career, he rose from producer and presenter to become the Assistant Programme Manager of OneFM 90.5, the then information and entertainment station of the Radio Corporation of Singapore. He has also presented on Singapore television, hosted national events as Master of Ceremonies including the 1993 South East Asian Games ceremonies. He became the Head of the Radio Section and a lecturer at the School of Film & Media Studies in Ngee Ann Polytechnic: Singapore’s only film school.