Few writers in B.C. can match the verve and intelligence of Moscow-educated Marina Sonkina. 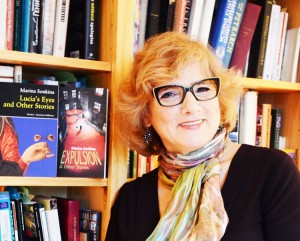 Should we add that Sonkina also has a 6’6” son named Yuri Kolokolnikov who plays Stryr in Game of Thrones?

Marina Sonkina’s latest collection of stories from a small literary press, Expulsion & Other Stories (Guernica $20), is nothing short of brilliant. Two-thirds of Expulsion consist of Chekhovian tales of survival set in the Soviet Union, but the longest and first story, ‘Face’, is a 65-page novella about Vancouver—and its apocalyptic ruin. Marina Sonkina currently lectures on a wide range of topics for UBC. [ALL PHOTOS BY LAURA SAWCHUK]