A wilderness of tigers 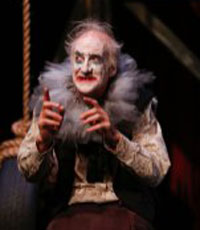 Consistently crude and scintillatingly grotesque, Rumble Theatre’s shocking and silly adaptation and transformation of Shakespeare’s most bloody and murder-laden drama, Titus Adronicus, into a daft comedy that thrives on the vivisection of dolls and deserves The Most Memorable Use Of A Tampon Award, Titus Bouffonius, is so continuously entertaining that one leaves the theatre aghast, speechless.

Audaciously written (“Go fuck a moose!”) by Pig Girl playwright Colleen Murphy, who has brilliantly inserted sparse sections of Shakespeare’s text without derailing the mayhem, this mawkishly brutal theatrical equivalent to the movie Titus starring Antony Hopkins is an unforgettable bloodbath of butchery during which you will disturbingly discover yourself laughing as the deranged Titus smothers an infant to death, complete with quivering, pudgy, baby doll legs in its death throes.

And it’s all defensible, even politically astute.

“Rome is but a wilderness of tigers,” Shakespeare wrote.

Indeed. In these increasingly revenge-driven, Trumpian times, this depiction of Titus “in an age of unreason” is a cultural warning, a wake-up call, about the venal depths to which humans can easily descend. 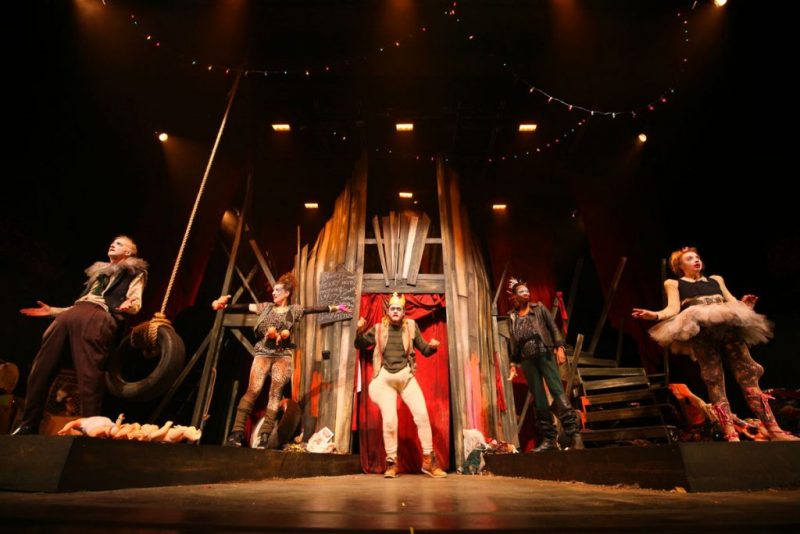 There is a plot:

Titus, a general, returns to ancient Rome after defeating the Goths. Having lost 21 sons on the battlefields, he has brought back the wicked Tamoka, queen of the Goths, as a prisoner. He dismembers her baby with his bare hands for revenge (different from the smothering scene). Titus dotes lasciviously on his daughter, Lavinia, unaware she is betrothed to the mild-mannered and fey Bassianus.

As the conquering hero, Titus tragically decides not to accept the job of Emperor, affording that position to the brother of Bassianus, the vicious alpha male, Saturninus, mistaking the latter’s egocentric brashness for strength. Saturninus insists he must have Lavinia for his bride. Plotting her revenge, the wily Tamora easily forms an alliance with Saturninus and also conceives a child with a relentlessly evil Moor.

There’s a good deal of simulated sex, absurd dialogue (“Come, labia lips.”) and one genuinely alarming scene in which the semi-coherent Lavinia, having just had her hands and tongue cut off, screams at the audience to call 911. This is NOT a show for the squeamish, the young or anyone who is going to be offended when a distraught father desperately beseeches the Cultch patrons for a rape kit.

There will be fourteen murders. The five actors presenting the show have a chalkboard on stage with the names of the fourteen people who will be killed—not including all the massacred infants—and they are crossed off as we proceed. 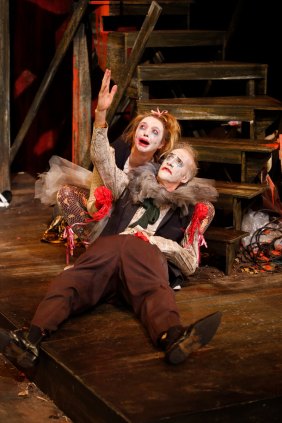 The full title of Murphy’s version is The Society for the Destitute Presents Titus Bouffonius. The hilarious conceit is that five hapless ne’er’-do-wells have a received a $500 grant to put on a play. They repetitively and insincerely thank the taxpayers and forewarn the audience: this show might include some interpretative dance.

The Godot-like names of the quintet are Sob (Peter Anderson), Fink (Craig Erickson), Leap (Pippa Mackie), Spark (Naomi Wright) and Boots (Sarah Afful). Four of the five performances as ghoulish clowns are absolutely brilliant. The audience can pick their own favourites. Tamora giving birth on stage? Lavinia speaking with her tongue cut out? Titus agreeing to have his arm sawed off?

It’s probably not giving away too much—because there is just so much to give away—to say that Titus Bouffonius doesn’t lose its momentum under the splendid direction of Stephen Drover and the audience is rewarded with a climax that requires the stage to be covered so that the remaining characters can liberally squirt blood from plastic ketchup bottles during a melee of death and destruction and craziness.

Think of that mass shooting in Las Vegas.

I can’t recommend this show enough.