One man’s passion for Passchendaele 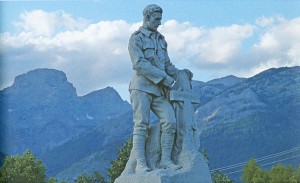 This "grieving soldier" statue in Fernie graces the cover of Remembered in Bronze and Stone.

Having had a great uncle who fought in World War I, Nova Scotia-born-and-raised Alan MacLeod of Victoria commenced an unprecedented odyssey in 2011, searching across Canada to document and showcase all military statuary erected between 1918 and 1929 that features a figure of a Canadian soldier in bronze or stone.

His resulting compendium, Remembered in Bronze and Stone: Canada’s Great War Memorial Statuary (Heritage $24.95), profiles 130 distinctive Great War memorials with family histories of the fallen and biographies of the craftsmen who made the statues. Coeur de Lion MacCarthy’s Winged Victory statues commissioned by the CPR for their rail stations in Montreal, Winnipeg, and Vancouver are perhaps the most recognizable. There are statues from each province, representative works by well-known sculptors such Alfred Howell in Ontario and New Brunswick; as well as statures by Sydney March and George William Hill; but most of the sculptors are unheralded. Many of the sculptors were unnamed artisans in Italy where many of the statues were made.

British Columbia has relatively few statues erected in comparison to the number of those who served–but the B.C. statues are no less interesting.

The book’s cover shows Emanuel Hahn’s “grieving soldier” statue located at Fernie, B.C. It’s one of ten similar statues credited to Hahn’s design that can be found across the country. The original that first appeared at Westville, Nova Scotia in 1921 was something of a Cadillac, a status symbol for communities who wanted to show how much they cared, but only one other copy was bronze like the original. The other eight were granite, carved by craftsmen using the same scale and Hahn design. Some have since suffered due to preservation issues. “The imitations are not all equally well executed,” MacLeod writes, “and not every carver felt obligated to pay slavish homage to the Hahn original.”

MacLeod also recalls how 7,000 people gathered in New Westminster on Remembrance Day in 1922 to witness the dedication of a new Board of Trade-sponsored war memorial representing a bronze, wounded soldier wearing a head bandage and no helmet. With his bayonet mounted, he peers over his soldier, seemingly ready for action, but also contemplative. A soldier named Major Jackson envisaged the design and A. Fabri was the Italian sculptor who produced it. The event was the subject of a Saturday Night magazine article.

“The figure wears the green patina typical of bronzes exposed to the elements for an extended time,” MacLeod writes, “a patina that only enhances its effect. Because it is bronze rather than marble, the head-bandaged soldier of New Westminster retains all of its 1922 physical integrity–it is as vivid, evocative and impressive as it was on the occasion of its unveiling.” “A face only a mother could love.”

The striking bronze soldier on a granite base at the northeast corner of the B.C. Legislature grounds is credited to Sydney March (1876-1968). We learn he was one of eight siblings who were sculptors, including Vernon March who was chiefly commissioned to undertake a World War I memorial in Ottawa that was commenced in 1926 and not completed until it was finally dedicated by King George VI in 1939–just before World War II was started.

“Sidney March’s Victoria soldier takes a back seat to none of his other sculptures,” MacLeod writes. “The soldier is unique–in contrast to most of his stone and bronze comrades across the country, he is not handsome, he is not young, his face is one only a mother could love.

“He is a worn, weathered, ancient-looking infantryman wielding his Lee-Enfield, bayonet mounted, ready to deal with the enemy. Weather-beaten face notwithstanding, this is one of the finest war-monument soldiers in Canada.”

Approximately 60,000 Canadians died as a result of the so-called Great War. For a new generation of Canadians who have never heard of Ypres, the Somme, Vimy and Passchendaele, Remembered in Bronze and Stone is a novel approach to education.

The project began after MacLeod came across a remarkable bronze statue in Westville, Nova Scotia. MacLeod became curious about finding similar statues, gathering materials for illustrated talks he presented to members of the Western Front Association and other organizations. After a talk for the WFA’s Pacific Coast branch, military historian-turned-novelist Sidney Allinson of Victoria urged him to write a book. Allinson became an enthusiastic supporter along with two other significant and prolific B.C. authors who are WFA members, Wayne Ralph, who served as a critical reader, and Barry Gough, helped him find his publisher. The head-bandaged soldier of New Westminster.

Alan Livingstone MacLeod studied English at Dalhousie University and worked in Nova Scotia and British Columbia in the field of labour relations prior to retirement. 978-1-77203-152-2