A mother’s work is never done

Despite decades of fighting for equality, women continue to be expected to handle the bulk of work at home while striving in the workplace. 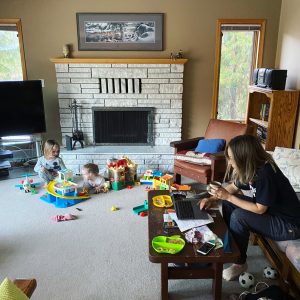 Amanda Watson, juggling mother working at home with her children.

Amanda Watson explores the mythology of the contemporary mother in the media: a typically white, middle-class woman on the verge of coming undone because of her unwieldy slate of labours. 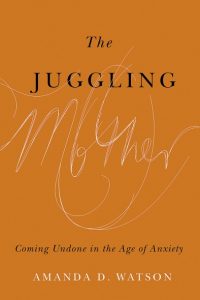 A lecturer in the Department of Sociology and Anthropology at Simon Fraser University, Amanda Watson wrote The Juggling Mother: Coming Undone in the Age of Anxiety (UBC Press $27.95). Here, she responds to questions about the central ideas of the book.

BCBookLook: In simple layman’s terms, what do you mean by ‘the juggling mother’?

Amanda Watson: By the juggling mother, I mean the mother who is busy keeping up with her many responsibilities, but she is not just busy. She is busy with good deeds that demonstrate both her service as a productive and efficient paid worker and her respectable devotion to her family. She is striving in both realms. She works hard at her job as a professional or an entrepreneur, seeking to climb the ladder and break glass ceilings, and she does everything possible to set her kids up for financial success and happiness.

So, I’m arguing that there’s a performative element to the juggling mother as she keeps herself and her family together. She may be unfairly burdened with work, and she may even be burnt out and depressed as a result, but she is also complicit in how labour is organized. She is willing to be overworked and she is unwilling to disrupt the way work and family life are organized unfairly. The juggling mother is not an activist.

This leads me to the notion of “affective duty,” which I describe as the emotional responsibility of mothers to keep their families feeling good in the face of highly uncertain futures. I argue that the responsibility to make things feel all better when things clearly aren’t (with respect to climate change, the economy, global conflict, racism, Covid-19) is the sort of glue that sticks women to all of this work. It describes the emotional life of motherhood today as we see it represented all around us.

BCBL: Do we, in Western society, take it for granted that mothers can not only take on responsibility for most of the chores in the household, they can also do paid work on top of everything?

A.W.: That’s a helpful way to think about it. We take for granted the fact that women will pivot to fill whatever gaps in labour emerge, paid or unpaid. Even though most women work for pay in Western societies, it is still the default expectation of women and girls to provide for the needs of family and community with their unwaged labour. While we now take many of our care needs to market, relying on low-waged workers who are disproportionately women of colour and immigrant women, we still hold gendered expectations of family and household management.

When Covid hit, women made themselves economically vulnerable when they left the paid workforce to care for and educate children. We take for granted that women and girls will comport themselves in such a way that families and communities thrive, even if they themselves are feeling overwhelmed or sad.

BCBW: What does this mean for women who want to have children and have a professional life? (And is this related to the second part of your book title: Coming Undone in the Age of Anxiety?) 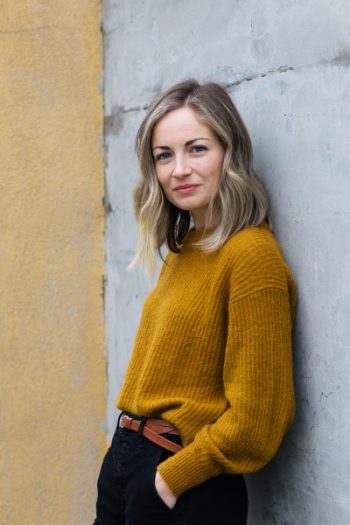 A.W.: This means that most women will be taking on an enormous load of work. We expect so much of mothers. While women can of course resist their distribution of unpaid work if they are partnered, they have little power to resist systemic pressures like workplace stigma and pay inequity. And families are hardly able to resist the administrative pressures of family life, from scheduling to record-keeping. I think it is sadness that I am describing in the second part of the title. How sad that we have designed family life to be impossible, especially in the midst of widespread popular feminism.

BCBW: Ultimately, is it really possible for women in the Western World to ‘have it all’? Does having a family come at the sacrifice of a career for women?

A.W. We have organized society in such a way that career and family come at the sacrifice of each other, one way or another. As I say in the book, I don’t think we want to have it all anymore. It’s too much! Certainly a balance of both is more accessible to families with financial privilege, but even affluent professional women, and women of colour in particular, face extra demands on their work and behaviour in order to be valued as competent. Rather than aiming to have it all, we might consider fighting for shorter workweeks, accessible childcare, and pay equity.

BCBW: All this takes place within our system of capitalism. How does capitalism make it more difficult for women?

A.W.: Our system of capitalism rests on women’s unpaid labour. When social security evolved in Canada after World War II, most women worked at home without wages. We have the same social security system today. In the 1980s, when real wages and the number of good full-time jobs began to decline, many middle-class families suddenly required two incomes. Women entered the paid workforce, typically in part-time work, and often holding multiple part-time jobs. Even as we encourage women to break glass ceilings today, the sexist and hetero-sexist notion of a male breadwinner remains embedded in our institutions. We are explicitly conditioning women to do two jobs to make up for labour shortages.

BCBW: Certain high-earning women with families (e.g. Facebook COO, Sheryl Sandberg) put the onus on individuals to “lean in” to be successful. What is your assessment of this approach? Is it reasonable? What are the costs to the families of women who put an emphasis on their professional lives?

A.W.: This approach is to be expected in a society that puts ultimate value on individuals pulling themselves up by working hard and making good, responsible choices. In that sense, it is reasonable, but it is unhelpful. I encourage my students to understand that this is what it looks like when individualism has its claws in feminism. We have made gender equality about individual choices and individual striving. This approach only causes harm. It creates the conditions for women’s work and family decisions to be scrutinized, no matter what they do.

BCBW: What about the divide between high-earning mothers and blue-collar mothers? Being able to pay for childcare makes it easier to focus on a career but not everyone has that luxury.

A.W.: The fact that childcare is a luxury good is what is holding us back. It is that simple. Childcare needs to be high-quality, accessible, affordable, and inclusive of the needs of diverse communities, children, and families. Not only does accessible childcare narrow the class gap between mothers, it narrows all kinds of social hierarchies between children and families. It is so simple, and so poorly understood in our society. I think we are getting there by making the economic case that childcare is a good investment. I really hope feminist social scientists can turn our attention to making another case at some point in the near future!

BCBW: At one point you write, “The juggling mother is not the best we can do,” and that women come “undone in busy service to capitalist productivity and service to their family.” Does this mean that it is unlikely for mothers to come out ahead in our current capitalist system?

A.W.: Yes. Of course there are many successful women who have children, but we will continue to see gender inequality in terms of wages and anxiety and depression if we rely on the juggling mother to fill gaps in labour in our society.

BCBW: Where do you look for answers? What gives you hope?

A.W.: Even though I’m critical of the systemic barriers that mothers face, I’m optimistic when I am talking to other mothers and parents. Instead of the competitiveness between mothers and families that we see satirized in media, I see solidarity and empathy. Witnessing that sense of allyship gives me hope. I really feel that women are thirsty for a collective break from shouldering so much work and worry, and I am hopeful that with enough solidarity and allyship across genders and races, this will translate to changes in how we organize work. I am also heartened when I see what an impact small policy changes can make on redistributing work and resources. The task of shifting labour across genders and classes seems infinite, but there is a lot we can do.

BCBW: Anything else you wish to add? I would be very interested to hear some of your own personal experiences with juggling motherhood and coming undone.

A.W.: I didn’t realize the extent to which I would revisit and unpack feelings of coming undone when talking about the book upon its release. This is still surprising me. After all, I had been doing this reflection methodically as part of my research! Not only did I need to confront feelings of coming undone as I tried to keep up with everything that is expected of me. But what I see the most clearly now is that these expectations are also coming from my own conditioning and desires. In addition to the pace of working motherhood, I have a voice inside my head telling me the good and right things to do to be a worthy worker and mother. Resisting that voice is hard. I think that releasing this book into the world has put me on a journey of unlearning my own attachment to privilege, to capitalist notions of success, and to what makes a family. 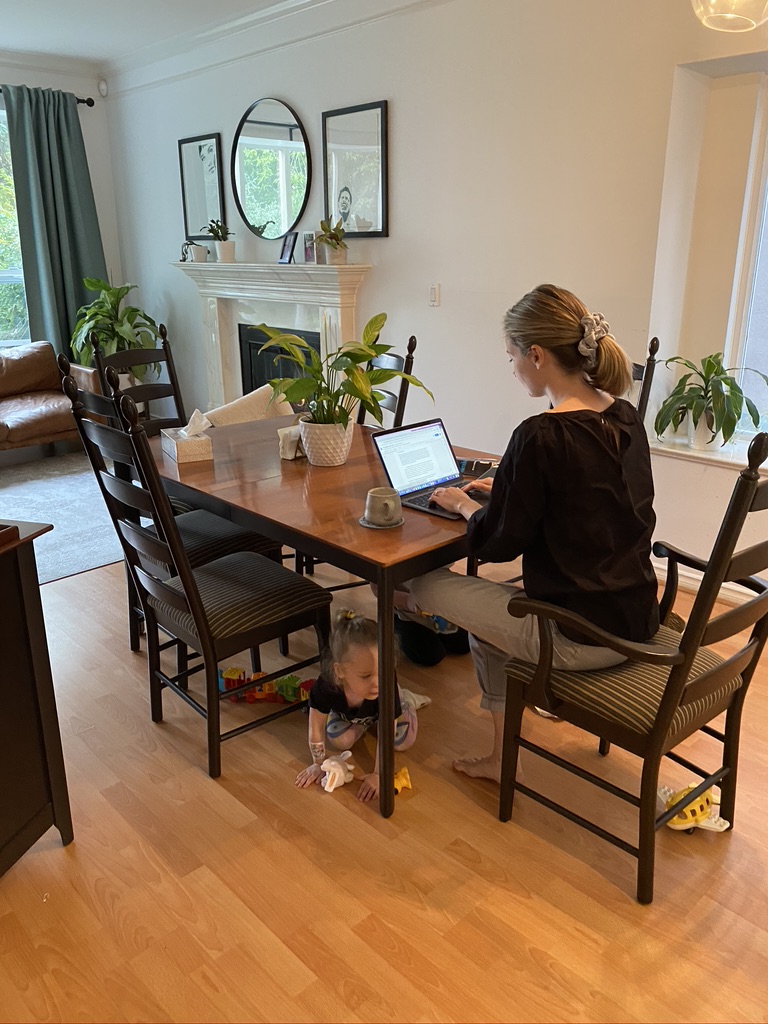 Amanda Watson, above, had a newborn baby while writing “The Juggling Mother.”