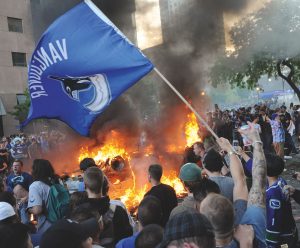 2011 Stanley Cup riot. Vancouverites can be passioniate about hockey, pipelines and property values.

City on Edge: A Rebellious Century of Vancouver Protests, Riots, and Strikes 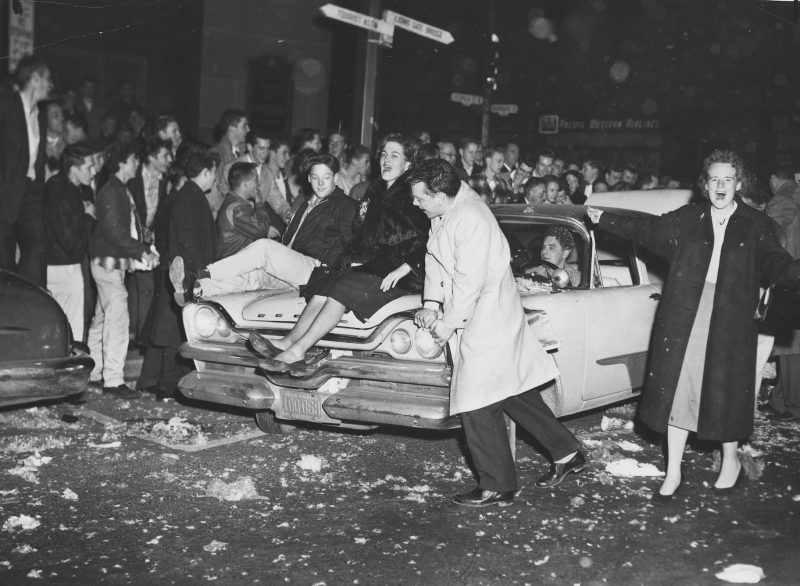 We would be remiss if we did not preface this review with a notation that Michael Barnholden has previously addressed the same subject matter with Reading the Riot Act: A Brief History of Riots in Vancouver (Anvil 2005).

According to historian Chuck Davis, the first riot in Vancouver occurred in 1887 when a white mob wrecked a Chinese camp in False Creek, enraged because Chinese laborers willing to accept 75 cents per day, were undercutting white laborers’ attempts to establish $2 per day as the going rate. Subsequent public demonstrations accompanied by property damage (real or imaginary) and police presence beyond the ordinary is the subject for Barnholden’s study. His sympathies are with the vanquished as he reveals how eyewitness reports and testimonies are often at variance with media reports—whether it’s the Gastown Riot of 1971, the APEC demonstrations of 1997, the Stanley Cup riot of 1994, the Grey Cup riots of 1963 and 1966, or the renowned Post Office and Art Gallery occupations of 1935.

“Every city has its distinct history of rioting,” he wrote. “… I decided to pursue the subject after the APEC riots made it clear that the local political economy was ignored in favour of a ‘bad apple’ explanation, which only further obscured the causes and events leading up to the riot.” Barnholden proposed an equivalent of the London Riot Re-enactment Society in order to stage re-enactments that will make historical events live again. His roster of riots included the Anti-Asian riots of 1907, the B.C. Penitentiary riots of 1934 and 1938, the Rolling Stones riot of 1972, the Guns ‘n’ Roses riot of 2002 and the Punk Rock riot of 2004.

I’d recommend that Justin Trudeau and Rachel Notley — the sorriest excuse for an NDP premier since Bob Rae gutted the Ontario public sector back in 1993 — pick up a copy of City on Edge.

I know they’re very busy making deals with pipeline companies, but they don’t have to do a whole lot of reading. Just flipping through the pages, looking at the pictures and consulting a map should be sobering enough.

Before their pipeline disgorges a single litre of climate-killing bitumen, it has to pass through a city renowned for defiance. This time they might find themselves facing more than just a little revolution…

Last month I joined a mob of scofflaws who pulled off a little revolution that I’m pleased to think would have had the blessing of the second premier of British Columbia, Amor De Cosmos, had he been alive.

I can say this with authority after reading Kate Bird’s introduction to City on Edge. She quotes De Cosmos’ declaration: “I would not object to a little revolution now and again in British Columbia if we were treated badly” by authorities in Ottawa.

So 300 of us formed ourselves up to confront Prime Minister Justin Trudeau, who claims to be a B.C. boy but whose actions are showing him in fact to be an oilman with a much finer sense of fashion than ethics. We wanted to remind him that we regard B.C. as being treated badly when he tries to shove a pipeline through our delicate undercarriage.

Trudeau was in B.C. to reiterate his vow that the Kinder Morgan pipeline, intended to carry a noxious blend of climate-destroying gunk, “is going to get built.” 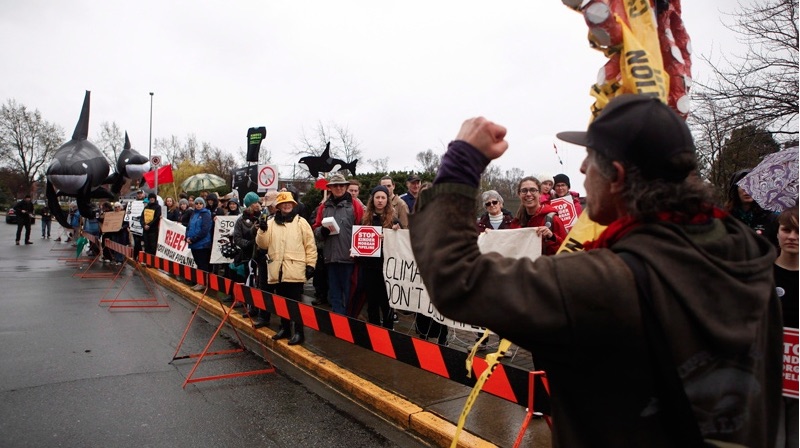 En route to a fundraising event in Vancouver, Trudeau made a quick publicity foray to the coast guard station in Victoria, where we 300 proponents of a little revolution assembled. The road to the station is narrow, so we figured he wasn’t getting past us without a lot more cops than we could see around us.

Yet when his black SUV pulled up and had to halt, we didn’t get the standoff we expected. Trudeau got out. Although he had five or six burly guys in black trench coats as a security detail, Trudeau stepped out in front of them all.

He was beaming. And that smile remained engagingly fixed as he moved toward and then into the mass of demonstrators, relentlessly shaking hands and even picking out the odd kid for special attention. The noise was intense, but people in front of him actually stopped yelling to shake his hand. As he moved, the crowd folded back behind him, and in that fashion a peculiar amoeba-like entity tumbled towards the coast guard station, with Trudeau’s guards maneuvering behind him, watching his back. Within minutes he had transited the entire crowd and disappeared into the station.

I took away two lessons. One was a grudging admiration for Trudeau. The guy has guts. Stephen Harper would never have ventured near the demo. Jean Chrétien would have throttled one of us.

The second thought was about the nature of political culture in Canada. Those five minutes were a powerful testament to Canadians’ forbearance, dignity, and civic responsibility. Had there been the slightest malice in the crowd, serious harm could easily have happened. Yet Trudeau breezed right through, not just because of his resolve but because of ours. We were determined to make a point, not make mayhem.

I recalled the incident as I pieced through this fascinating collection of photos revealing a side of Vancouver that the stunning pictures in the tourist brochures entirely avoid. City on Edge celebrates a place that, for all its reputation in other parts of the country as laid-back, has taken to brawling with great frequency and exuberance. 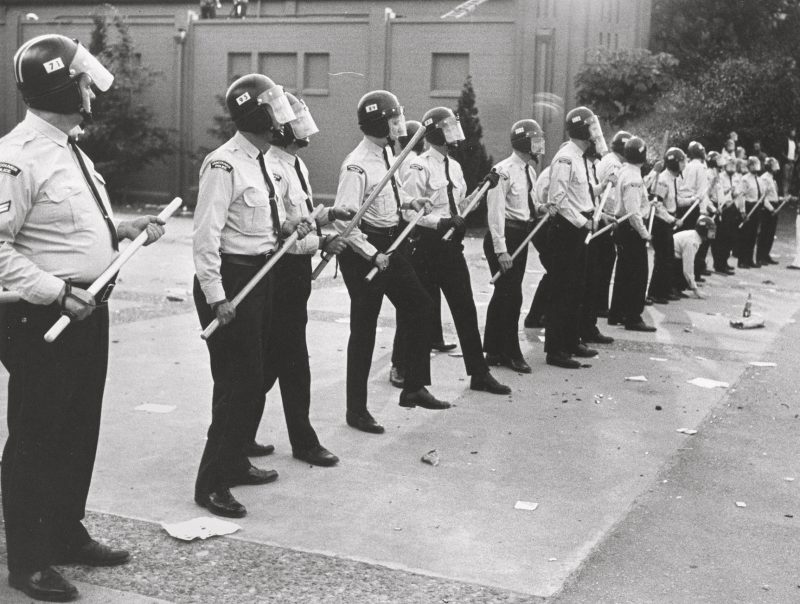 As comedian and academic Charles Demers points out in the foreword, Vancouver is steeped in “class war, gang war, colonialism and its discontents.” Little wonder, he says, that the city has been “anything but marginal in terms of providing Canada’s rebels, revolutionaries, and outlaws.”

Demers and Bird briefly set out some reasons why Vancouver owns this edginess. They attribute it variously to the absence of central authority due to the city’s physical marginality, to the fact that its status as the terminus of the Pacific railway makes it a point of congregation for the country’s down-and-out, to the schism between affluent west and indigent east within the city, and to its resource dependence, making it prone to booms and busts that lead to economic and social distress.

Their musings are secondary, however, to the photographic record of the outbursts that have lit up the city with considerable regularity.

It’s hard to conceive of now, but the age of spontaneous public photography by amateurs employing accessible technology is quite recent. The first mobile phones with significant photo capacity arrived on the scene just fifteen years ago, ushering in the age of citizen journalism. Before that, demonstrations of mass displeasure were most often recorded and presented to a wider audience by professional newspaper photographers. 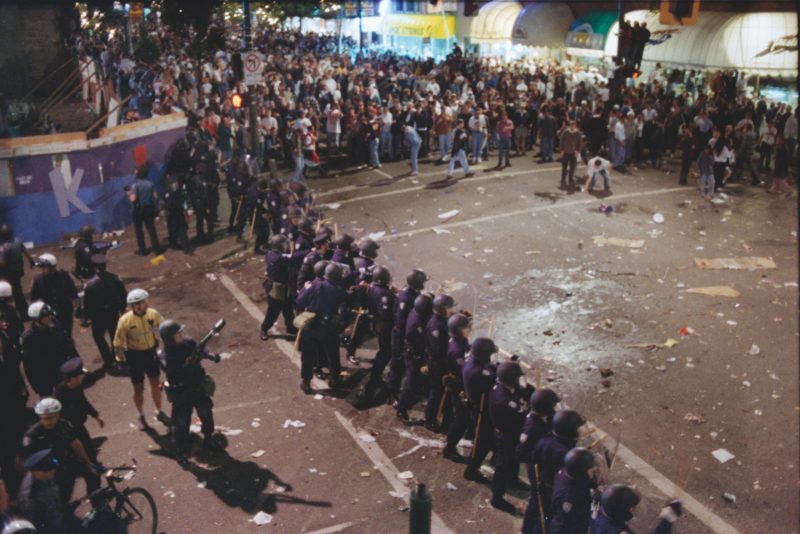 The corner of Robson and Burrard was the epicentre of the Stanley Cup riot of June, 1994. Steve Bosch, photo Vancouver Sun.

The heyday of the newspaper photograph, 1900 to the early twenty-first century, is the time span of this collection. What makes the photos really sing is their content. They all address Vancouver’s restless soul, as expressed through protests, riots and strikes.

City on Edge was published to mark the opening of an exhibition on the same theme at the Museum of Vancouver that ran from September 2017 to February 2018. Curator and editor Kate Bird had helped to manage the photo collection at the Vancouver Sun and Province for 25 years.

The prototype for this form of exploration of the unruly underside of Vancouver was Bird’s Vancouver in the Seventies: Photos from a Decade That Changed the City, published by Greystone in 2016. It showcased photos from the files of the Vancouver Sun, augmented by essays written by Douglas Coupland and former Sun columnist Shelley Fralic.

City on Edge takes on what is at once a larger and a smaller project than the earlier work. Larger because it moves from a single decade to embrace more than a century. Its narrower focus on acts of protest results in a vibrant and insightful exploration of an often-overlooked aspect of Vancouver.

What the photos show is that for all the vigour and persistence of the protests, Vancouver has been marked by, as De Cosmos would have it, “a little revolution.” Perhaps a better phrase would be a peaceful revolution. The faces of a lot of healthy, sometimes even happy, folks shine in the images. Blood and fear, even anger, are rarely in evidence, and there is no sign of death.

What rare examples we see of violence, property destruction and human injury stem not from political protest but from riots at sporting and cultural events, often fueled by alcohol. Stanley Cup defeats for the Vancouver Canucks in 1994 and 2011, disappointment among attendees or would-be attendees of concerts by Elvis Presley in 1957, the Rolling Stones in 1972 and Guns N’ Roses in 2002, and Grey Cup overexuberance in 1955, 1958 and 1966 led to far more damage, arrests and injury than did political protests. 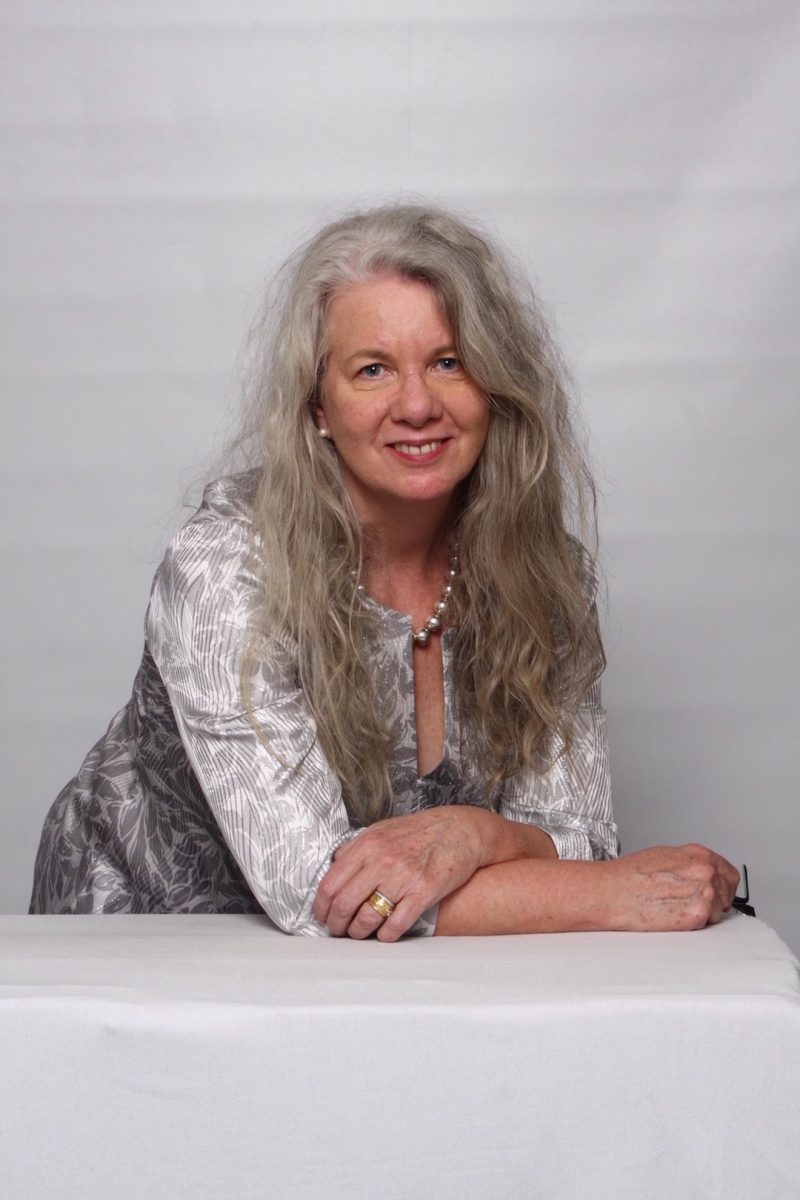 Moreover, where there was violence at political demonstrations, police were almost always the culprits.

Does the “raising hell” image of Vancouver that Bird gives us apply in fact to political activism in the city?

That question also introduces the related matter of what editorial choices Bird made in selecting images for City on Edge, a subject she doesn’t broach. Was there simply an absence of photographic evidence of the uglier side of pickets and protest, or did a bias creep in that favoured relatively peaceful political actions?

Fortunately, in the near future historians of Vancouver will have a far larger collection to consult to test their hypotheses about the nature of dissent in Vancouver. While the Pacific Newspaper Group (the combined Vancouver Sun and Province) has retained the hard copies that Bird had access to, it has donated to the City of Vancouver Archives the 2.5 million negatives from which the photos were selected. Understandably, the task of cataloguing hundreds of boxes of negatives will be time consuming, but within a few years an invaluable resource will be publicly available. And, of course, those photos will range over a wide array of subjects, far beyond protest. 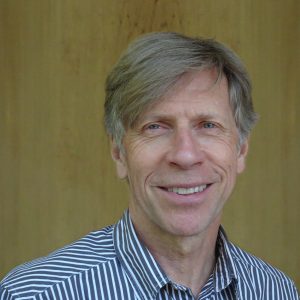 Larry Hannant is a history professor and an award-winning book author and website creator. He is an adjunct associate professor in the Department of History at the University of Victoria. He is the author of The Infernal Machine: Investigating the Loyalty of Canada’s Citizens (University of Toronto Press, 1995) and the editor of The Politics of Passion: Norman Bethune’s Writing and Art (UTP, 1998), which won the Robert S. Kenny Prize in Left/Labour Studies in 1999, and editor of Champagne and Meatballs: Adventures of a Canadian Communist (Athabasca University Press, 2011). Hannant researched and co-wrote a feature-length documentary film on the Doukhobors, The Spirit Wrestlers, which was broadcast on History Television in 2002. He is the director of “Explosion on the Kettle Valley Line: The Death of Peter Verigin” and “Death of a Diplomat: Herbert Norman and the Cold War,” two sections of the award-winning Great Unsolved Mysteries in Canadian History website. In addition to non-fiction books, he has published magazine and newspaper articles, as well as poetry and short stories. 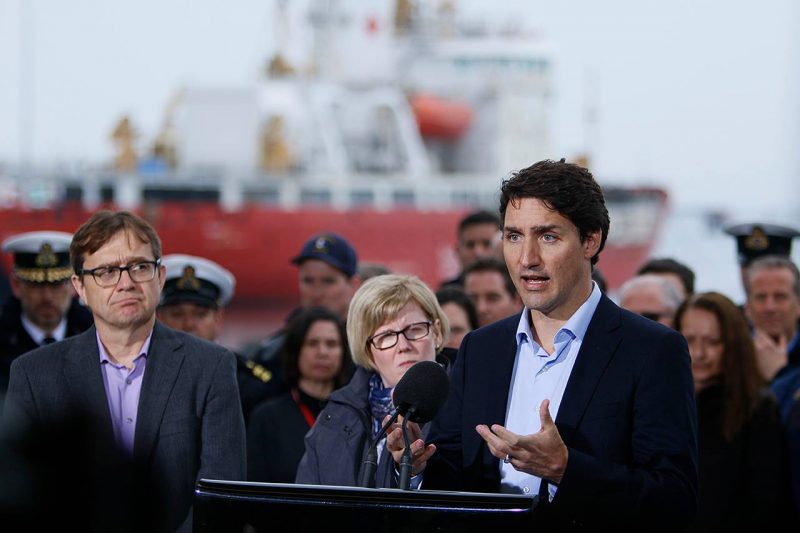