A labour of love & labour 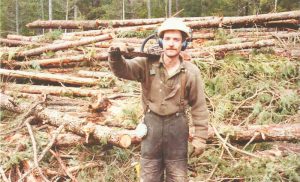 Born (1952) and educated in England, Mark Warrior of Ladysmith has published in several anthologies, both in Canada and abroad. He wrote a chapbook entitled Quitting Time (Vancouver: MacLeod Books 1978) published by antiquarian bookseller Don Stewart. He worked for ten years in the forest industry during which he was an IWA job steward, a logging Camp Chairman and a member of IWA Haney Local 1-367’s Executive Board. This was followed by twenty years as a commercial fisherman as a member of the United Fishermen & Allied Worker’s Union, during which he was Secretary-Treasurer its 1,000-member Vancouver Fishermen’s Local 1 and Fishermen’s Strike Captain during UFAWU’s 1989 industry-wide “Free Trade” strike.

Building the Power can be downloaded without charge at: http://www.cswu1611.org/book/