B.C. astronomer gets his due 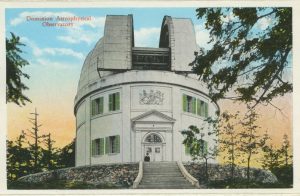 A new, 560-page biography is reviewed by John Hutchings who stargazed there for 51 years. It marks the 100th anniversary of Plaskett’s observatory.

by R. Peter Broughton with a foreword by James E. Hesser 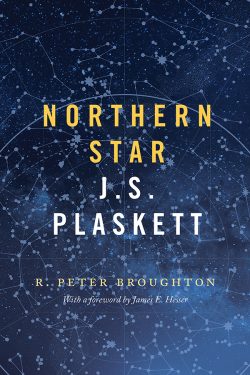 John Stanley Plaskett (1865-1941) was the founder and first director of the Dominion Astrophysical Observatory in Victoria. This biography is well-timed, published on the 100-year anniversary of the telescope and the observatory that he founded. It opened in 1918 after a wartime delay.

This reviewer has worked as an astronomer at Plaskett’s observatory for 51 of those 100 years, affording a special perspective on the book and the stories it contains. Over the past century, research in astronomy, and our concept of the Universe, have evolved vastly, particularly in the last decade or so.

Enormous databases at many wavelengths, requiring powerful computers, high-tech instruments, and large international teams are transforming the way we investigate the cosmos. It is sobering to review the dedicated and individual efforts of Plaskett and his contemporaries as they made the first vital steps towards the big science that we now pursue.

Peter Broughton’s book is an impressively complete and thorough account of its subject. Of its 560 pages, about 300 form the main text, while some 120 more include all Plaskett’s papers and talks, about 1,400 individual notes to the text, and an extensive index. Containing also over 100 photos and detailed captions, this is a scholarly work of reference. 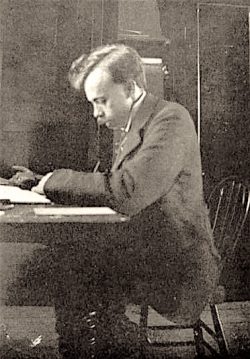 Plaskett is credited with establishing Canada on the world stage in astronomical research, a legacy that arguably remains to this day. Much of this was done singlehandedly — both in establishing a world-class observatory and in using its instruments to produce research that was widely recognized and acclaimed. This biography is therefore worthy of interest historically, culturally, and scientifically.

Broughton recounts Plaskett’s life from his childhood in rural Ontario, which provided no tradition or background for the astrophysical reputation he would carve for himself and Canada in the early twentieth century. It was not an easy or quick journey. He developed his interests and abilities in technical and scientific techniques via a series of occupations as a young man.

Plaskett was always a showman, eager to take opportunities to entertain and impress. These qualities, along with hard work and dogged perseverance, were the keys to his later successes.

His interest in astronomy came gradually, but in time developed into the leadership and dedication that led to his remarkable achievements. Plaskett eventually worked with the leading American and European figures in astronomy research and won many honours for his work and expertise. In the process, he set Canada on a path to major contributions to astronomy research, which continue to this time, both within the Dominion Astrophysical Observatory and across the country.

A question that Broughton poses, and that arises in reading this biography, is whether Canadian history would have been very different without Plaskett. In many ways, I consider that his personal accomplishments were indeed game-changing — although his historical legacy was not directly why I came to Dominion Astrophysical Observatory in 1967, or indeed why many others have joined in the last several decades. 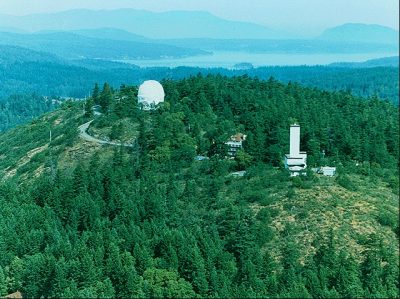 But we owe to Plaskett and his successors the ongoing reputation, the in-house excellence, and the research opportunities that continue to make the Dominion Astrophysical Observatory, and Canada generally, a vibrant community for this work.

My remarks are those of an insider, and it is noticeable that the book itself is written very much from that viewpoint. Thus, while Northern Star: J.S. Plaskett contains lay explanations of Plaskett’s science and methods, Broughton also provides a great deal of detailed accounting of his scientific and engineering activities. And while he provides the content of Plaskett’s research projects, papers, and meetings in exhaustive detail, I imagine these sections will be of limited interest to the general reader. 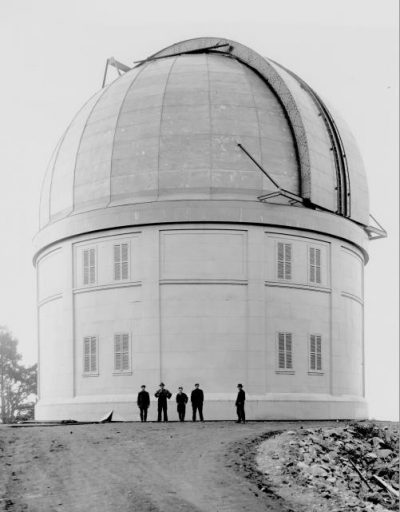 Side view of observatory. circa 1920. Parks Canada photo.

Plaskett’s start in astronomy came almost fortuitously by recognition of skills that led to a somewhat undefined job in the new Dominion Observatory in Ottawa. There he developed astronomy research projects and the leadership that culminated in the building of what was then the largest telescope in the world, on Little Saanich Mountain near Victoria in 1918.

The background to Plaskett’s scientific accomplishments was his persistence in pursuing the necessary public funding and support. In an age where there was little process for major facilities, he made and used contacts in universities and government with remarkable success.

The book does not, presumably because of lack of detailed material, go much into his personal life or character. Rather, the recorded professional actions provided by Broughton are the clues to some aspects of his evolving personality and sense of self. He appears to have been a mixture of kindness to colleagues, determined self-promotion, and cordial social relationships in public. I am left with no idea of how well I might have gotten on with him as my director. 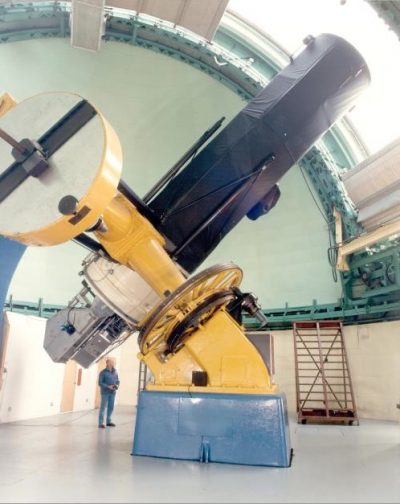 Plaskett’s speaking and writing record is impressive. The book lists an average of about six public talks every year from 1899 to 1939, and the same rate of non-technical publications once his astronomy career was established at the late age of about forty, in 1905. His research papers were not numerous, indeed his output was modest by today’s standards for one of his stature and even by comparison with his contemporaries.

Of course, the astronomy research community of the interwar years was smaller than today’s by some ten or fifteen times, although today there are many more areas of specialized investigation. Nevertheless, the impact of his work is reflected in the many awards he earned in his profession.

Plaskett’s research was done at the time when precise spectroscopy was first used to discover the composition, temperature, size, and luminosity of stars, along with measurements of their velocity, and a multitude of variations of these that were far from understood. The concept of the Milky Way as a disk galaxy and its structure and rotation were new, and their understanding was due in large part due to Plaskett and his colleagues’ painstaking work over years.

The book also highlights the respect and collaboration across the Canada-US boundary that began in those days and still characterizes astronomical research. This began with, and was fostered by, the relationships that were forged in Plaskett’s day. These qualities have now spread to all corners of the world.

Broughton treats us to many transcripts of letters and memos that made their way across the world by what we now call snail mail. Indeed, trips to meetings took days or even weeks, but were made as part of the way of research collaborations.

Broughton poses the question of what inspired Plaskett, and what led to his recognition among his peers. He used his skills in designing instruments and using them for massive long-term projects, rather than in developing into a scientist of original breakthrough ideas. A master at promoting his work, Plaskett enjoyed the celebrity status that he earned. While we may conjecture on these matters, his unique place and leadership in Canadian history stands out in this book. 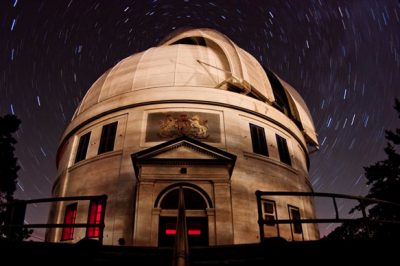 Northern Star: J.S. Plaskett contains many archival photos, mostly of equipment or groups at meetings. These may have limited interest to those not into the history of astronomy, and most would have benefitted from some digital improvements. Broughton provides noticeable links to his book on the history of the RASC — Looking Up: A History of the Royal Astronomical Society of Canada (Dundurn, 1994) — and his own involvement within that organization.

Overall, this is a book that needed to be written. Its appeal may fall between the general public readership and that of active astronomers, but many passages bridge that gap, and it is evident that nothing has been omitted for those who crave detail and further reference.

Northern Star will stand as a complete and thorough record of a remarkable Canadian, a definitive account of what he gave to the country and to the world of science. 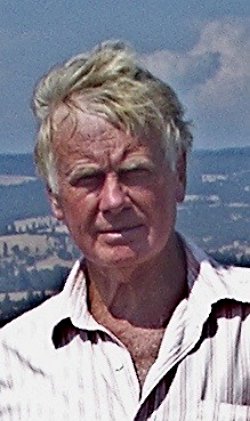 John Hutchings is an astronomer whose research has ranged from hot stars to black hole binaries and quasars. He has used telescopes around the world and in space, and from X-ray to radio wavelengths. Born in South Africa and a graduate of Cambridge University, he has been based at the Dominion Astrophysical Observatory in Victoria since 1967 and has worked with colleagues and space agencies around the world. He led Canadian participation in a series of key missions, including the International Ultraviolet Explorer, the Hubble Space Telescope, the Far Ultraviolet Spectroscopic Explorer, Astrosat and the Ultraviolet Imaging Telescope, and the James Webb Space Telescope. He is currently working on new space observatories for Canadian participation. He also writes mystery novels based on his travels — stories about ordinary people who get involved in adventures beyond their normal experience from shady dealings in the wine trade (A Fine Drop, 2011) to difficult situations on coastal British Columbia (Death in Remote Places, 2013) and South America (The Clue from Cusco, 2017). John Hutchings lives in North Saanich. 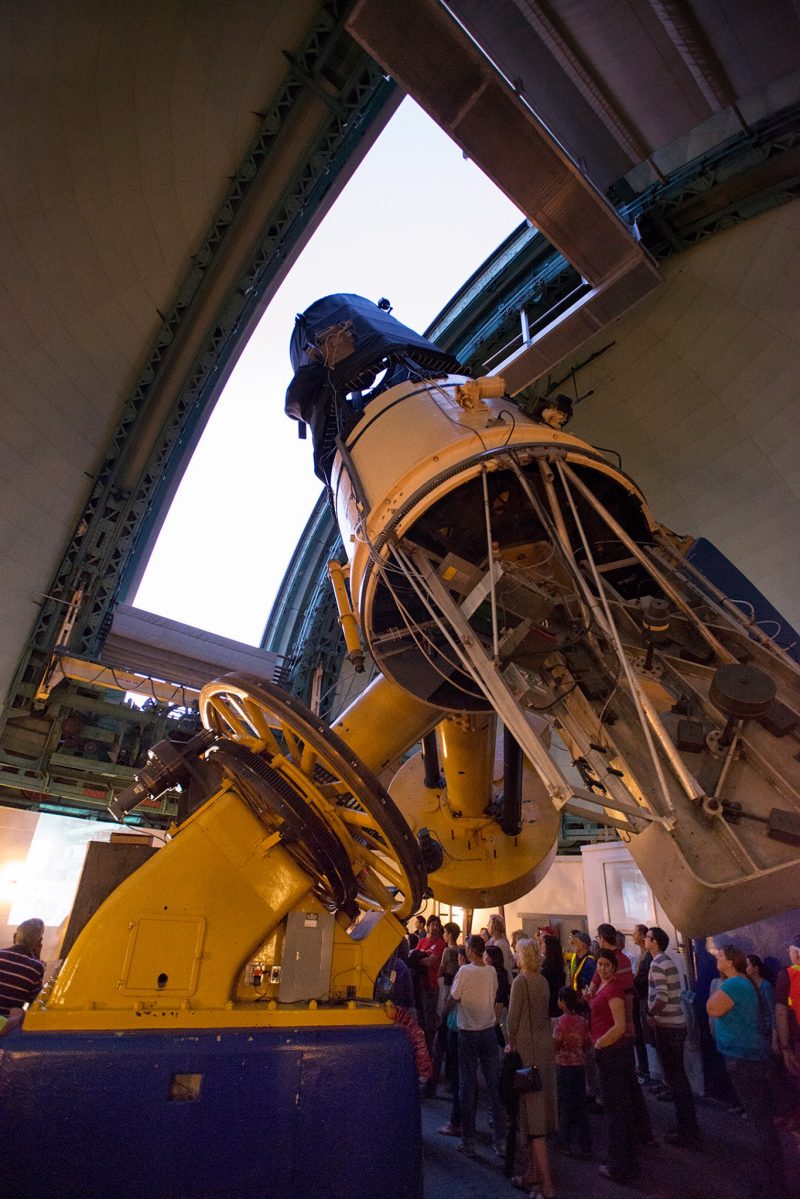 A tour visits the telescope in 2017. Rick Robinson photo.