In Birchwater's tenth book, profiles of Nuxalk, Dakelh and Tsilhqot’in peoples are mixed with settler histories. 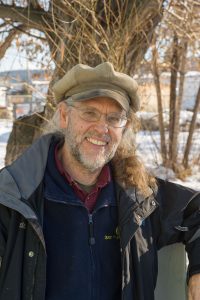 Sage Birchwater has done more to chronicle Cariboo life than any other writer. Craig Smith photo.

Birchwater’s beat extends past the Chilcotin plateau, down the old Nuxalk-Dakelh grease trail to Bella Coola. Sage Birchwater credits playwright Gwen Pharis Ringwood with urging him to keep a record of his travels on the Chilcotin Plateau – a record that, ultimately, resulted in Birchwater’s Chilcotin Chronicles: Stories of Adventure and Intrigue from British Columbia’s Central Interior. In an email of July 2017 from Lumby, B.C., where he has been evacuated due to forest fires in Williams Lake, Sage clarified his memories of Ringwood:

“I met Gwen Pharis Ringwood in Williams Lake after I showed up there in 1973. Gwen was a well-known Canadian playwright who had been in the Williams Lake and Cariboo area for more than twenty years by that time.

“Gwen was a leading light in the arts community in Williams Lake. An outdoor theatre was named after her in Boitanio Park and a number of her plays had been performed across the country.

“I’d been in Williams Lake about four years when Gwen gave a writing workshop at her place on Chimney Lake where she and her retired MD husband, Barney Ringwood, lived. It was at this workshop in 1977, a month or two before I took everything I owned and headed west to the Chilcotin to get lost in the wilderness, that Gwen offered this advice.”

The result, notes reviewer Lorraine Weir, is a book that stresses the common ground between settlers and Indigenous people. – Ed.

When he was about to leave Williams Lake for “the Chilcotin wilderness” as a young man, Sage Birchwater was advised by playwright Gwen Pharis Ringwood to “keep a record.” He describes his latest book, Chilcotin Chronicles, as an attempt to do just that. He writes that it’s a “book of stories, anecdotes and photographs of the Cariboo Chilcotin Coast” and acknowledges the publishers of the Stew Magazine in Williams Lake, where many of the stories first appeared in print.

The volume is comprised of thirty stories and anecdotes that are framed by four “Contact” narratives and an Afterword, together with an account of reconciliation in relation to the Chinlac massacre, plus a comprehensive and useful list of Timelines. The book is copiously and often beautifully illustrated. In addition to his own photographs, Birchwater includes a generous selection of archival photographs including portraits by Frank Swannell, Cliff Kopas, and a superb photograph of Old George Turner by Al Elsey. An accomplished journalist, editor, and author of nine other books including his classic, Chiwid (New Star, 1995), Birchwater is a master of popular history and one of a small group of writers like Paul St. Pierre, Chris Czajkowski, and Irene Stangoe to focus on the Cariboo Chilcotin region of B.C.

For Birchwater, this vast area extends past the Chilcotin plateau, down the old Nuxalk-Dakelh grease trail to Bella Coola and includes the familial interconnections among Nuxalk, Dakelh, and Tsilhqot’in peoples as well as the settler histories of the same regions. For more recent settlers, this was the “frontier.”

The vast geographical and historical scope of Chilcotin Chronicles, together with Birchwater’s acute ear for stories, are prominent features of this book. Along the way, Birchwater captures the complexity of larger-than-life figures like Bullshit Valleau whose “disagreeable nature” and criminal shenanigans made him notorious in the West Branch Valley in the 1920s and 30s. Back-to-back with a lively account of Valleau, who was said to have been “dead against Indians,” is what is perhaps the best chapter in this book of many contrasts, the story of Eagle Lake Henry, a Tsilhqot’in man who is still spoken of today with great respect. Birchwater contextualizes this story within what he calls “the sharp divide that separated the Indigenous and settler realities in the Cariboo Chilcotin,” which was intensified as settlers arrived with homesteading grants and asserted property rights to Indigenous land. Determined not to lose his land, Eagle Lake Henry opted, in the language of the time, for his “white rights,” giving up his Indian status so he could buy crown land and provide security for his family at Henry’s Crossing, as it’s still known today.

Stressing that Eagle Lake Henry was no less Tsilhqot’in for having given up his status, Birchwater rightly celebrates his subject’s ingenuity and business sense. However, while Birchwater inflects the phrase “white rights” with irony, he doesn’t problematize the racism that is explicit in the phrase and in the process that Eagle Lake Henry felt compelled to choose in order to protect his own land from settlers.

Preferring the steady, reliable voice of the narrator/chronicler, Birchwater stresses the common ground between settlers and Indigenous people rather than elaborating on the power-imbalanced, still-colonial relations between them. Birchwater’s Chiwid takes a different approach. Interviews with more than eighty people were transcribed, excerpted, and organized into a narrative that evokes the life of Chiwid while preserving the jaggedness and particularity of each speaker’s voice and story. Headnotes in bold precede each excerpt, but otherwise each voice speaks for itself and is identified by name, articulating one facet of what becomes the composite narrative of Chiwid through many voices and perspectives.

Arguably, this approach to doing oral history is truer to the jagged history of Indigenous peoples surviving colonization. By avoiding the construction of a dominant narrative to unify the whole book, Birchwater preserved the contradictions and idiosyncrasies that characterize the results of large-scale interviewing, highlighting the cultural conflicts which impacted Chiwid’s life so deeply. In its unresolved jaggedness, brilliant rendering of Chilcotin English, and careful attention to detail, Chiwid was a breakthrough in the oral history of this region. The comparison of two very different books by the same author, both of which are described as oral history, inevitably raises questions that might not otherwise present themselves. The uneven, fractal quality of Chiwid heightens the reader’s awareness of the single reliable narrator of all of Chilcotin Chronicles and reminds us of the functionality of that narrator in a journalistic context and of the riskiness of poetic inconclusiveness for many readers.

These are two different approaches to history, let alone oral history. As Birchwater recently described Chilcotin Chronicles in an interview, it is “a history told with Indigenous people sitting at the table.” In contrast, Chiwid’s modest byline, “collected by Sage Birchwater,” points to the pluralities and contrarieties of many “reminiscences.” However, it would be a mistake to allow the stylistic differences between these two books to blur their common commitment to “a story about the transformation of a country, the clash and integration of cultures, and the strength of individuals,” as the introduction to Chiwid puts it. Reminiscent of the nostalgia conjured by Terry Glavin’s Nemiah: The Unconquered Country (New Star, 1992), this passage asserts transformation and integration where some might see violence and oppression, and a singular story where some might see not just a clash but a war, followed ultimately by a quarter century of legal action to restore Tsilhqot’in rights and title to Tsilhqot’in land. Clearly, the difference here is not just stylistic or tonal but political.

Each story is part of the process and Sage Birchwater has my gratitude for taking good care of so many stories over the years.

Lorraine Weir is working on an oral history of the Tsilhqot’in Aboriginal title and rights case with Chief Roger William (Xeni Gwet’in). She teaches Indigenous Studies at UBC Vancouver and is a professor in the English Department there.