It takes one to tanka

Haiku is not the only Japanese poetic form to go global. 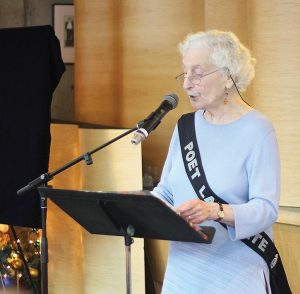 Late literary bloomer Naomi Wakan now encourages others to opt for a similar style with a form consisting of five lines called the tanka.

The Way of Tanka Born in England in 1931, Naomi Deutsch come to Canada in 1954 and worked as a psychotherapist in Toronto. She and her second husband Elias, who married in 1977, together chose their surname Wakan, a Sioux word meaning “creative spirit.”

She and Eli, a wood sculptor, came to B.C. in 1982 and founded Pacific Rim Publishers in 1986 in Vancouver before moving to Gabriola Island ten years later.

As the Inaugural Poet Laureate of Nanaimo, Naomi Beth Wakan pushed poetry beyond the libraries and cultural venues to streets and buses and parks and the chambers of the city council.

With an eye to the future of poetry, literacy and the human race, she encouraged the establishment of the position of Youth Poet Laureate. Her collaborator Sonya Arntzen calls her an “inspired provocateur of writing in others.”

This how-to book is also a how-it-was book, teaching readers the way of tanka by inviting them to join her own progress along that way. It serves as an anthology of tanka by numerous devotees, including but not predominantly, herself. Wakan came to poetry late in life. Before that she was a psychotherapist, a publisher and writer of educational books for children, and a painter and fabric artist. She and her husband the sculptor Elias Wakan lived for two years in Japan, and the books from their Pacific Rim Publishers introduced English-speaking children to the stories of other cultures. The hint of Japanese influence stayed with her as she moved to writing poetry for adults. She became a practitioner and teacher of haiku, hosting workshops and contributing on an international scale. More recently, she found her way to tanka.

Haiku is known to most readers of poetry as three-line poems “consisting of two or more everyday sense images juxtaposed in a way that not only define the moment, but define it so penetratingly that each image is augmented by the other.” She has treated haiku exhaustively in previous books, especially The Way of Haiku (2012).

Her chapter “Tanka compared with Haiku” in the present book explains tanka as “five-line poems that move from image to image, idea to idea, feeling to feeling, yet the whole five lines flow together seamlessly to present a strong statement of humanity’s place in the universe, even though the poem may be intensely personal.” The five lines follow a pattern: short, long, short, long, long. To clarify the distinction, she offers an example of each on a similar topic. First, a haiku by Devar Dahl:

Then a tanka by Christopher Herold:

in the morning fog/ we slip our oars and drift/ between loon calls/ all that’s left of the world/ the warmth of our bodies.

The haiku speaks only of images: an empty cabin, a canoe filled with leaves. Yet, on consideration, it is clear to us that this haiku clearly speaks of the impermanence of things, using just those images with no overt indication of this inner idea. The tanka also has strong sense images: the drifting boat, the loon’s call, but it allows itself a comment that directs our thoughts to the high value of human contact in a cold world.

Wakan calls herself a “poet of the domestic scene.” It suits her to begin with something in her everyday existence. Here is one of her “Skylight tanka,” celebrating our new skylight, handily situated about the daybed:

high winds -/ at the blink of an eye-lid/ a new set of clouds/ move swiftly across the skylight/ restless skyscape, restless me.

She recalls a comment once made of her poetry, that it is really prose until you come to the last line.

There is nothing new about this sort of poetry in the English language. The early modernists who called themselves Imagists learned from Japanese poetics. If none of the tanka quoted by Wakan attain the impact of William Carlos Williams’ Red Wheelbarrow or Ezra Pound’s petals on a wet black bough, most approach an intensity and focus worth striving for.

As a mentor, Wakan has felt moved to offer a way “to bridge the gap between what people wanted to express and what they were able to express, the chasm between inner and outer lives.”

The Way of Tanka begins with a selection of fifty tanka. Only after readers and would-be writers have digested these, does the instruction begin. Chapters address the uses and varieties of tanka, love tanka, nostalgic tanka, witty tanka, response tanka [two poets carry on a conversation in alternate tanka], ekphrastic tanka [tanka describing another work of art, e.g. a painting], tan renga [first three lines by one poet, last two by someone else] and tanka as self-expression.

A section on “Japanese sensitivities” examines to what degree English language tanka can emulate the Japanese, what can be learned and retained, what needs to shift to something different but also valuable. The book concludes with Tanka Exercises for the initiate.

It is almost alarming to think of so many people writing tanka, and so many tanka. Samuel Goldstein, whom Wakan dubs the “godfather of tanka written in English,” writes as many as twenty a day. The tanka act as a kind of diary. She has misgivings: “As a personal essayist, I know the danger of recording one’s life as one is living it.” But she decides tanka are “the perfect poetry style to release our true voices and real feelings.”

Much of Wakan’s insightful instruction in the way of tanka could benefit anyone feeling their way into the reading and writing of any sort of poetry. The discipline involved in a tanka, like that in any traditional form whether it be sonnet or villanelle, can calm the poet’s eye lest it roll too far in its fine frenzy. That said, most readers of this book will have dabbled in haiku and be ready to move on — or to move back and forth, depending on the day and the mood.

I think Naomi Wakan, inspired provocateur and mentor, would encourage every reader to try, even for the benefit of themselves alone.