Much credence is given to the contemporary of First Nations and Hawaiian elders. While the evidence for Baker’s family background is far from definitive, arguably based on some wishful thinking, their book does constructively provide an alternate viewpoint as to why Captain Vancouver was discredited by the Lords of the Admiralty after he returned to England in 1795. With the sponsorship of Neptune Bulk Terminals and Port Metro Vancouver, the authors arranged to have one thousand copies of their book donated to North Shore high schools. This is a book that falls well below accepted academic standards of research. 9780993843815 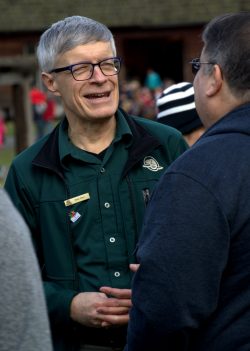 Mike Starr (M.A. Canadian Studies, Trent 1992), wrote a thesis on using primary source literature in heritage interpretation. That led him into Parks Canada, where he has spent 24 years as an interpreter, planner, and manager at three different national historic sites. He retired in 2017 retiring from the public service to devote more time to writing and editing. Contact him at mike@prose-star.ca