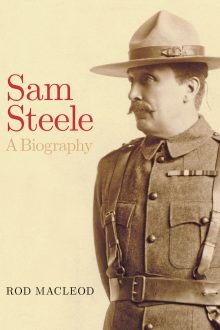 There’s a CBC Heritage Minute about Sam Steele. You may have seen it. A stern, moustachioed Mountie sits at his rough wooden desk, staring down an excitable American prospector who wants to wear pistols to the Klondike. “Men don’t wear pistols in Canada,” says Mountie Sam, and the American gets taken away and sent back to America.

So there you have it: peace, order, and good government in Canada, as opposed to rough-and-tumble American outlawry, all enforced by the North-West Mounted Police (before it became the RCMP), personified by Superintendent Sam Steele.

Vancouver’s Justin McElroy ranked this Heritage Minute Number 2, citing its iconic use of the stereotype of peaceful Canadians versus dangerous Americans. That was back in 2014, though (and the Minute itself is from 1993). Innocent times when we thought we were virtuous and not guilty of ongoing genocide.

Though he refers to residential schools and details some cruel actions of the Canadian and British Columbia governments in their treatment of the Indigenous people, Rod Macleod essentially follows this traditional approach. When he talks about genocide, it refers to nefarious doings south of the border, where the government did not control the settlers. In Canada it was different, largely thanks to the Mounted Police, including especially Sam Steele, who was known for keeping order, for being strict, and also for being a fair and just negotiator with the First Nations and others — though at times he could do little, given the orders he received from above.

Steele was an order-following man, perhaps too much so. The one time he was essentially in control, during the Klondike gold rush, almost running his own police force, he took imaginative measures, perhaps going beyond the law, to make sure things didn’t get out of hand. For his pains, he was relieved of command after only eighteen months and spent the rest of his life chafing under the misguided directions of superiors, whether in South Africa during the Boer War or during the First World War.

Earlier he spent some time in British Columbia, in the East Kootenays, helping bring law and order there, helping the CPR get built, and handling troubles involving the Kutenai, who were upset about their treatment by the BC government. And before that he was involved in both Riel Rebellions, leading the government forces at Loon Lake, the last battle of the second uprising.

But his shining moment was the Klondike gold rush; it’s what made him legendary.

There are earlier books about Steele which call him the Lion of the Frontier or talk of him being an amazing man. Was he amazing? Rod Macleod’s account makes him sound rather ordinary. He had illnesses and family problems (being separated from his wife for long periods because of his postings to faraway places, something she didn’t like at all). He made bad investments. He perhaps drank too much. He was vain and dyed his hair. He was sort of a regular guy, not an icon, and his iconic activities get downplayed in this telling, not dramatized with dialogue from who knows where, as in that Heritage Minute or in some of the earlier, more popular books.

Macleod, an emeritus professor at the University of Alberta, takes a much more sober, academic approach. He writes crystal clear prose and he’s not one of those debunkers who delight in tearing down their subjects, and yet at the end you wonder what was so special about Superintendent Steele.

Perhaps Professor Macleod needed to find a clearer story arc. If Steele wasn’t primarily a Hero, then what was he? What is the key to his life? Ambition? He kept applying to become commissioner or assistant commissioner of the Mounties, but never made it. He was mostly just a superintendent, though he later got military titles as high as colonel and major-general – but the last seems to have been a bit of a sop, along with the knighthood he received in his last year when he was being eased into retirement.

Maybe this is a tale of frustrated ambition or of a man who needed to assert himself more instead of always following orders. He was at his best when given command in the Klondike, but he had to be given command; he was not one to seize it.

One thing one learns from this book is that there is politicking everywhere and even back then: office politics even without offices. People are jealous, spread gossip, and manoeuvre for position. Even then, even among the Mounties. It’s the politicking that’s sometimes blamed for Steele’s lack of advancement, though he had his political connections too and tried to use them. Maybe he just wasn’t as good as others at that. Mostly he was a good soldier or policeman, one who could impose discipline, train troops, and keep order among and between the settlers and the First Nations.

He was beloved by the locals wherever he was. There was an outcry when he was relieved of his post in the Yukon, and in southeastern BC, even while he was there, an outpost was named for him: Fort Steele, a heritage site today near Cranbrook. A man of the people, you might say, who perhaps could have done more with his talents. If only someone had given him another command to hold.

Sheldon Goldfarb is the author of The Hundred-Year Trek: A History of Student Life at UBC (Victoria: Heritage House, 2017). He has been the archivist for the UBC student society (the AMS) for more than twenty years and has also written a murder mystery and two academic books on the Victorian author William Makepeace Thackeray. His murder mystery, Remember, Remember (Bristol: UKA Press) was nominated for an Arthur Ellis crime writing award in 2005. His latest book is Sherlockian Musings: Thoughts on the Sherlock Holmes Stories (London: MX Publishing, 2019). Originally from Montreal, he has a history degree from McGill University, a master’s degree in English from the University of Manitoba, and two degrees from the University of British Columbia: a PhD in English and a master’s degree in archival studies.