A coincidentally novel, Damaged at Daybreak (Now or Never 2019), mines familiar Clark territory, focussing on another less-than-lawful male roustabout, Evan Marshall, who, at his best, can be described as “a freelance hack and fly-by-night adventurer.” This anti-hero is led even further astray by a crazed but alluring alcoholic and drag addict who checks in and out of a psychiatric ward. They hatch a plan to rob a crack house with a shotgun and a cleaver for weapons. The book jacket cover image of a garish strip club makes it clear that Clark’s work is not courting sanction from the politically-correct orthodoxy of The Writers Union of Canada

His photographs have appeared in “Ross Macdonald: A Biography” by Tom Nolan, Scribner, New York, 1999; “Meanwhile There Are Letters: The Correspondence of Eudora Welty and Ross Macdonald”, edited with introduction by Tom Nolan and Suzanne Marrs, Arcade Publishing, 2015; “Interviews With Contemporary Novelists” by Diana Cooper-Clark, Macmillan, London/ St. Martin’s, New York, 1986; “Designs Of Darkness: Interviews With Detective Novelists, Popular Press by Diana Cooper-Clark, Bowling Green, Ohio, 1983, as well as in “The Globe And Mail”, “NOW”, and “The Kingston Whig-Standard”. 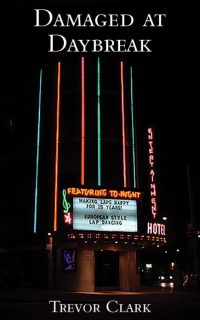 As his many friends mourned Trevor’s loss on Facebook, his publisher paid homage on their website: Trevor was not only a capable and courageous writer, but a fascinating person. As a writer, he was seemingly from another, more classical time, and didn’t really fit into the strict definitions of what is supposed to define one today? His characters were always very real and very raw, and one didn’t have to ponder very long the question of how much of himself Trevor injected into them? We loved him for that; he was unabashedly exactly who he presented himself as, and that will always have value in this world, no matter the direction the political or cultural winds are blowing at the time.

When I was editor of Write magazine, I asked him to submit an article about the raciness his writing. With his trademark humour he discussed Joyce, Lawrence, Miller and Burroughs? own forays into literary sex and censorship, then queried, ?If an author is supposed to write about what he/she knows, is there a risk that the reader will assume that the protagonist’s style in bed is that of the author’s, and if so, is it permissible to exaggerate??