Before We Lost the Lake: A Natural and Human History of Sumas Valley
by Chad Reimer 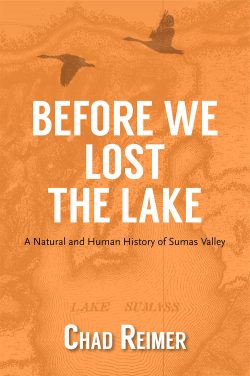 Up until its disappearance, in matter or mind, Sumas Lake never really stood still. Since its birth at the end of the last ice age, it was a spillway for the mighty Fraser River and contiguous watercourses, an expandable basin to hold the deluge of meltwater as it rushed from mountaintop to the Pacific. With its associated wetlands, Sumas Lake was like a giant sponge that soaked up the overflow, sparing lower parts of the Fraser Valley from severe flooding. Hemmed in by the hard rock of Sumas Mountain to the Northwest and Vedder Mountain to the southeast, the spring freshets poured into Sumas Lake, expanding its shoreline northeast and southwest over adjacent bottom lands of alluvial clays, sands, and gravels, so that the lake’s surface area expanded to over twice its size. An average year saw it grow from around 14 square miles and a depth of around nine feet to over 31 square miles and a depth of 28 feet, figures that say nothing of the scale of early Holocene inundations or when “historic floods” began to be recorded in the district.

It was within this waterscape that humans and natural organisms made their home, its fluid nature shaping everything to come. Like other Northwest Coast peoples, the Indigenous peoples of the lake were expert fishers, but they developed a particular mastery for sturgeon, which they caught using extraordinarily long harpoons, some over 50 feet in length, from cedar dugout canoes or from fish weirs built along adjacent streams. Waterfowl was another important resource. Ducks and geese were taken by the hundreds, even thousands, but this only a tiny fraction of the millions of birds that migrated annually to the valley.

Within the extensive wetlands that ringed the lake, people staked out and gathered the tender white roots of wapato, an aquatic plant producing tubers that provided a much-needed source of starch. While the lake and its surrounds provided all that was needed to survive, and more, stagnant pools of water over the summer months also meant it was also home to a vast concentration of mosquitos. To defeat their ravages people came up with an innovative cultural adaptation peculiar to the Lower Fraser Valley: settlements built on stilts to escape the summer hordes. But their depredations were not seen as wholly negative. They gained a special place within local mythology in which warriors took the Mosquito as a guardian spirit. 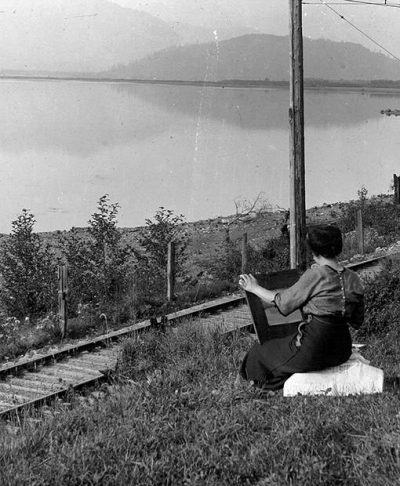 In the 1860s White settlers arrived in the Sumas Valley. Most came and went. Some stayed on after the Fraser Canyon Gold rush, others came as representatives of the Crown or the Provincial colonial government. A few stayed to make a new life. While most settlers were initially attracted by the lofty ideals of establishing a small farm and raising a family, the difficulties of draining low-lying land combined with the toing and froing of the lakeshore was more than they had bargained for. Those who stayed learned to adapt — just like their Indigenous neighbours, the Sema:th and Sto:lo. With its rich growth of blue-joint grass, four to six feet in high, carpeting the landscape, the valley became famous for its pastoralist economy well before cultivation of the soil produced anything reminiscent of agrarian living. What’s more, because low-lying wetlands were annually inundated, it was impossible to improve or own land in ways that pioneering extolled. These “marginal” lands became a sort of “commons” through gentlemen’s agreement. Given the richness of the local environment it was dairy farming that produced the greatest profits, a realisation not missed out by local native people, so that Sumas graziers — newcomers and Indigenous alike — drove their stock onto the rich grasslands to roam.

As more and more settlers arrived, greater and greater pressure was placed on land and resources. Prying eyes began to size up lands used and occupied by Indigenous peoples, while others began to covet the land that sat, wasted, under the lake. The end of the nineteenth century and the early decades of the twentieth were increasingly difficult ones for the Sema:th and Sto:lo. Introduced diseases like smallpox and measles hit them hard, and they were increasingly circumscribed to Indian Reserves that got smaller as the years went by. If this was not enough, as settlers poured into the district, they began to threaten to take away the lake as well. The language of progress and God were invoked to make the land fertile, to have paradise regained. 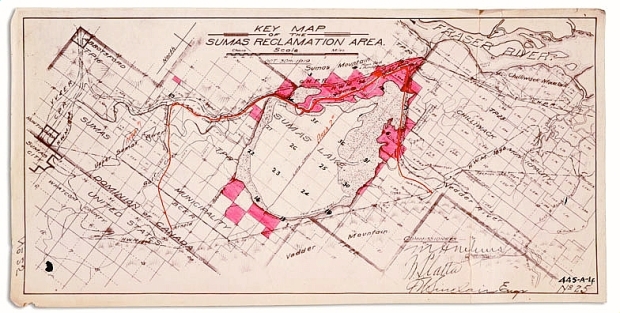 Map of Sumas Lake, 1919. Courtesy of National Archives of Canada

The early history of “redeeming” of the valley was more about talk than action, more bluster and high rhetoric from competing under-financed factions of prominent White settlers and men of science. There was nothing inevitable about the dewatering of the lake until the Province of British Columbia effectively underwrote the plan. After a litany of promises and false starts, the Sumas Dyking Commission, operating with a modern command and control structure, set to work to deliver it.

In 1921 A mechanized task force of monstrous dragline shovels and dredgers arrived on the scene to commence a four-year plan of action that would see dykes, canals, and ditches bite into the valley floor, altering and stemming its watercourses and fundamentally redesigning the landscape. The coup de grâce was the finishing of the Sumas Dam in 1924. Its ten sluiceways passed water out of the lake, while the dam’s reinforced concrete kept the Fraser River at bay. With it, Sumas Lake passed into memory.

As Chad Reimer writes in Before We Lost the Lake, up until the 1920s Sumas Lake was a “long-lived dynamic force within the region.” Much of this history is lost to our collective consciousness, buried (metaphorically at least) beneath dairy farms, suburban tendrils, and the asphalt of the TransCanada Highway; its only visible testament a banal roadside heritage plaque inscribed in the language of progress.

To give other authors their due, the history of Sumas Lake has been covered before — to my mind Laura Cameron’s Openings: A Meditation on History, Method and Sumas Lake (McGill-Queens University Press, 1997), being one of the most provocative — but Reimer’s is the first that sets out to tell, in his words, “the full story” of Sumas Lake; a narrative “beginning with its birth in the last great Ice Age, and ending with its premature death and lingering presence into the 21st century” (p. 11).

The book can be divided chronologically around three main themes. The first, which addresses its natural and human history from Sumas Lake’s glacial origins up until European contact, works as a foregrounding to the later chapters. The second addresses the early colonial period, when incomers and natives lived in relative co-existence with the natural rhythms of the lake. The third deals with the events around the more aggressive impacts of colonization in the late 19th and early 20th century, including the dewatering of Sumas valley.

Before We Lost the Lake is first and foremost an environmental history of the valley and the people who made it home through adapting to its watery rhythms. It is also the story of modernity, and the “mastery” of the natural world along with its devastating impacts, both human and natural. While there is no single organizing thesis, momentum is achieved by the dynamism that Reimer brings to his sources and the critical attention he brings to a range of issues, from the ambiguities of the settlement “frontier,” to the sharp end of colonialism and the tragedies it would visit upon native communities, to the assumptions of progress that underwrote nature’s transformation.

Historical geographers and other spatial historians will appreciate Reimer’s attentiveness to the uncertainty surrounding the colonial surveys that sought once and for all to fix the shores of Sumas Lake to the map. While the map sought to give the illusion of control, in reality this would not be achievable until dams, ditches, and pumps brought the valley to a heel. And up until then, the remaking of the valley was hardly the upward-swinging plot-line we have become accustomed to, with its narratives populated by sure-footed, axe-wielding pioneers. Rather, change in the valley was about compromise, adaptation, and unexpected outcomes.

In this context Reimer’s gentle chiding of local White settlers’ efforts to master nature is somewhat reminiscent of Theodore Steinberg’s Slide Mountain (University of California Press, 1996), and its critique of the folly of owning nature — even with the Sumas Lake turned to dry land, nature had some surprises up its sleeve in the form of the 1948 flood, which once again submerged parts of the valley. 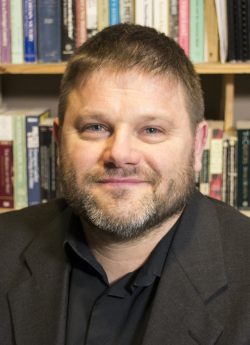 While there is much to praise in this book, there are a few shortcomings. Anthropologists and Archaeologists might wince at his occasional ahistorical treatment of Indigenous groups who sometimes appear to be little more the living expressions of ancient people who have “for countless generations” lived in “their homelands much to themselves” (p. 65), or wish more from his less-original and underdeveloped explorations of the pre-contact human geography; but these are minor issues in a book that really comes into its own with the complex meeting of people, ideas, and place that that saw the remaking of the valley from around the middle of the nineteenth century.

Before We Lost the Lake is engaging local history with academic heft. Reimer doesn’t spend time hitting you over the head with lofty concepts, rather he embeds complex ideas subtly through his deeply-researched and richly-textured historical examples. What is more, this is a well-written book. Reimer’s punchy and economical prose should appeal to a wide range of readers interested in British Columbia’s past, from scholars of different stripes to students and armchair enthusiast alike. 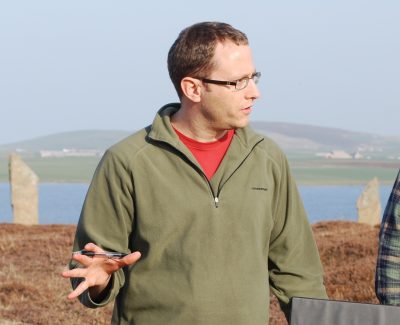 Jeff Oliver on a field trip in Scotland

Jeff Oliver is a landscape archaeologist with an interest in the recent and contemporary past. His research focuses on the colonial history of western Canada and improvement-period Britain. He is the author of Landscapes and Social Transformations on the Northwest Coast: Colonial Encounters in the Fraser Valley (University of Arizona Press, 2010). Born and raised in the Lower Mainland, he lives in Scotland and teaches archaeology at the University of Aberdeen. 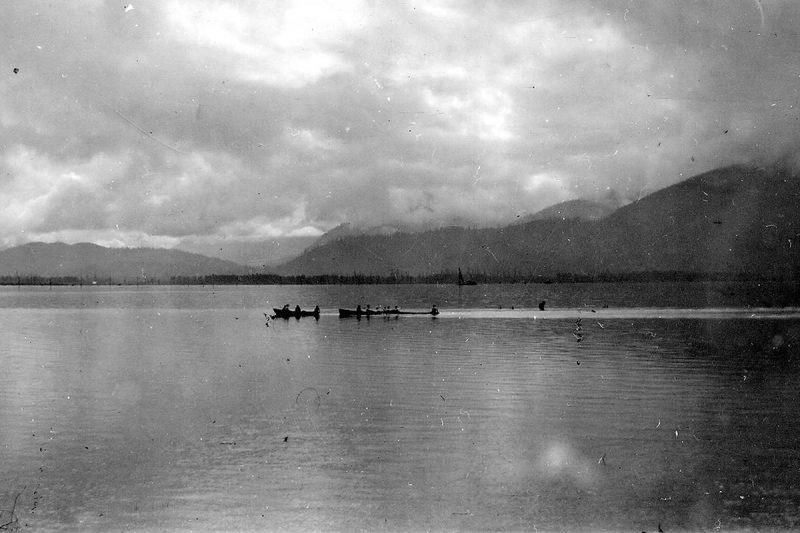