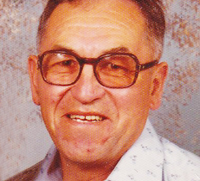 When Bill Reid’s “Lootas” canoe was paddled all the way from Bella Bella to the site of Expo 86, it was protocol for the people of the Heiltsuk Nation to first visit the territory of the Musqueam people. When the canoe landed on the beach at Musqueam for a feast and traditional dances, Arnold Guerin was among the Coast Salish elders who officially welcomed the Lootas canoe while wearing his Coast Salish blanket. The photo shows Guerin and his wife, Jenny Guerin (nee Moses).

Born in 1910, Arnold Guerin was a pioneer in the movement to revitalize the Aboriginal languages in B.C. He taught one of the first school-based courses and his Hunq’umi’num Language: Book 1 (1993) set the standard for Aboriginal language primers. (His daughter Arlene Guerin has since advised the correct spelling is Hun’qum’i’num’.)

A member of the Musqueam Band, Arnold Guerin taught at on the Kuper Island Reserve and then in Musqueam. He also served as a resource for UBC linguistic field methods courses and collaborated with Wayne Suttles in producing a grammar and dictionary. He also worked with Vickie Jensen & Dr. Jay Powell on the language and a linguistic lexicon. (https://www.rrncommunity.org/archive_elements/118)

Arguably Jay Powell and Vickie Jensen are the most significant Non-aboriginal authors in B.C. for the preservation of indigenous languages.

Anthropological linguist and independent scholar Jay Powell worked on and wrote about Aboriginal culture and languages since the late 1960s. He and his wife Vickie Jensen produced 30-40 schoolbooks in a variety of Aboriginal languages and co-wrote Quileute: An Introduction to the Indians of La Push (1976). Their substantial archive of field notes from forty years of anthropological work in the Pacific Northwest and Vickie Jensen’s 50,000 First Nations photos were donated to UBC’s Museum of Anthropology in 2009. Arnold Guerin in front of Lootas canoe at Musqueam beach.

Powell designed alphabets for a number of Aboriginal groups and compiled various dictionaries: Quileute Dictionary, co-authored with Fred Woodruff, (1976) and Our World-Our Ways, T’aat’aaqsapa Cultural Dictionary (1991). Powell previously taught in UBC’s Department of Anthropology. In the new Millennium he has researched history and traditions for the Haisla of Kitamaat Village. Jensen and Powell also designed and wrote the CD Rom project Nugwa’am for U’mista Cultural Society (2001).

Among her various books, Vicki Jensen also chronicled the carving and raising of a totem pole designed by Nisga’a carver Norman Tait for the Native Education Centre in Where The People Gather: Carving A Totem Pole (1992). The title was derived from the name of the totem, Wil Sayt Bakwhlgat, meaning ‘the place where the people gather.’ Her collaboration with a Nisga’a totem pole carving crew was repackaged and republished in paperback as Totem Pole Carving: Bringing a Log to Life (2004). It also resulted in a children’s book Carving a Totem Pole (1994). Jensen later wrote and published The Totem Poles of Stanley Park (2004).

Jensen and Jay Powell bonded as a couple in LaPush, a small native village on the northwest coast of the Olympic Peninsula in Washington, where they helped the Quileute [pronounced Kwil-LAY-yute] revive their language and culture. The met at a time when 50 Quileute could speak their indigenous language; 600 could not. Very quickly the number of Quileute speakers on the reservation dwindled to a handful. “Jay and I didn’t know it at the time,” she says, “but that was the beginning of our life together.”

Fred ‘Woody’ Woodruff, one of the last remaining Quileute speakers, had the patience to teach his language to Powell. The couple proceeded to make language and culture books for the Quileutes, the Kwakwaka’wakw, the Halkomelem, the Eastern and Western Gitksan, the Shushwap, and the Nuu-chah-nulth.

The books they produced are copyrighted for the native band. This approach proved problematic for Powell’s teaching career at UBC.

“The anthropology department might have thought our work was interesting and even important,” says Jensen, “but the books certainly didn’t count for promotion or tenure since they hadn’t been produced by a juried press. Academics were uncomfortable with language and culture books that seemed too much like pragmatic self-publishing, which in those days was categorized with vanity press works that nobody but the author would publish.

“But the process of “real” publishing took two to three years to accept a manuscript, have it reviewed, seek subventions, edit and re-edit, proofread and print.

“So, instead we did it ourselves, sometimes producing a book in six weeks. The native communities wanted their language lessons, dictionaries, cultural readers and kids’ picture books now!” Jay Powell first came to LaPush in 1968 to research his Ph.D dissertation as a University of Hawaii graduate student. When Jensen joined him in 1972, she was already teaching students who didn’t fit into mainstream schools.

“We debated whether the languages of the coast were doomed and how to rekindle pride and cultural interest,” she says. “We eventually decided to produce a couple of schoolbooks that the elders could use in teaching at the school.

“We felt it was particularly important that these materials look respectable, like ‘real’ schoolbooks rather than a handful of dog-eared mimeos. I insisted that they be illustrated with photographs of local kids and of village life on the rez.”

Flash photography was not permitted in potlatches or feast ceremonies, so Jensen learned to work with very slow shutter speeds. “I also developed the negs and printed the images myself,” she says, “Because we were always on a meagre budget, we were limited to b&w images and illustrations as part of our photo-ready copy.”

Long before computers were an option, theirs was a thriving desktop operation. They tape-recorded the elders and used a typewriter with a special IBM Selectric ball in order to produce the necessary diacritic markings. They used Letraset to transfer titles, hired an illustrator, developed and printed photographs, planned the layout, stuck everything in place with tape or wax, and then found a printer who could print and bind within allowable budgets.

Powell and Jensen invariably lived on the rez, often with a family, and returned year after year. Publications were usually celebrated with a community feast. “This body of work sort of sneaked up on us,” Jensen says. “We’ve been so busy writing and publishing ‘in the margins’ that we’ve never been a significant part of the mainstream publishing picture.

“But we have no regrets. Recently someone left a salmon hanging on our doorknob. It’s the kind of anonymous thank you that really means something here.”

While Powell continued to teach at university and write “respectable” academic papers, Jensen accepted an invitation from Alan Haig-Brown to try editing Westcoast Mariner Magazine. It turned into a four-year stint. She has also written books on native art and maritime life, eventually setting up her own company, Westcoast Words, for her narrow-niche books on underwater robots and a guide to local totem poles.

After they produced their first Quileute school books in 1975, the phone in Vancouver started ringing. “In 1980-81, when we lived in Alert Bay, we wrote 13 books, helped with opening U’mista Cultural Centre, taught a photography class, and had a second baby.”

Their commitment to the work didn’t change, but technology did, as did their methodology. “In the beginning, we thought good-looking, respectable school books would be enough. Then we realized that while the elders might be fluent in the language, none had any experience in classroom dynamics. So we added teacher’s manuals to our repertoire.

“When that didn’t prove as effective as we’d hoped, we set up a three-year Kwak’wala Teacher Training Project, where teachers would not only learn about NASL (Native as a Second Language) techniques but could share ideas, produce group materials, and get post secondary credit, first through North Island Community College and later SFU.

“Eventually we did our first immersion CD-ROM for young kids. Back in 1980 there were only old men ‘at the log,’ singing the ancient Kwak’wala songs at potlatches. Today, there’s a whole generation of powerful young singers (and dancers) making their own CDs.”

“A language is like a species of bird,” Jay Powell has said, “that has evolved across thousands of generations. How hard would we work to save such a bird from becoming extinct?”

Arguably the most impressive single dictionary for language preservation in B.C. is Ronald Beaumont’s 1,000-page Sechelt Dictionary published by the Sechelt Indian Band in 2011. This mammoth undertaking was based on material Beaumont had collected during a forty-year period from 1970 to 2010. As a member of UBC’s German Department (later Department of Germanic Studies) from 1961 to 1996, Beaumont first broke significant ground with his grammar guide for the Sechelt language, she shashishalhem, published by Theytus Books in 1985), complete with English-to-Sechelt and Sechelt-to-English cross-referencing.

Ron Beaumont told BC BookWorld, “My interest in North American indigenous languages was sparked by some Linguistics courses that I took in the late 1950s while I was pursuing graduate studies in Germanic philology at the University of California in Berkeley.

“Back in Vancouver and teaching at UBC, I learned, in 1969, from acquaintances involved in the recording of BC Indian languages that nobody was currently working on Sechelt. With the permission of then Chief Henry Paull I started recording Sechelt language material in 1970. I knew that Sechelt, like a number of other indigenous languages, was almost extinct, and I believed that the extent of my avocational service would simply be to add whatever I could to the existing archival documentation of the language.

“This rather bleak view began to change in the late 1970s, when I was asked to create a Sechelt language course for the newly developed Native Environmental Studies Program for high school students. Prior to this I had worked with individual informants, but now I found myself meeting regularly with a few Sechelt elders who functioned as consultants for the project. This committee, spearheaded by the late Clarence Joe, showed a keenness that I had not expected.

“The Native Environmental Studies Program was short-lived, but the language committee’s enthusiasm was not. The elders became convinced that we should be teaching all the kids, starting with the very young, the language of their ancestors. As our work progressed, I was amazed at how much of the language was being recalled. Soon the language was being taught at the nursery school on the reserve and in the local public schools. And I was working on a pedagogical grammar of Sechelt.

“Looking back on all of this, I think that our work was an important part of a Sechelt cultural revival that was beginning to blossom at that time. We realize that the Sechelt language and its use can never be completely restored, but—as we have already experienced—even a modest revival of it is of enormous significance to the Sechelt people in maintaining their cultural identity.

After the publication of she shashishalhem: The Sechelt Language, in 1985, the language committee (now quite a bit larger) decided to start work on a dictionary of Sechelt. Even then I knew that this was going to be a much bigger project. We still had to get a lot more information, and this kind of work was slow going. Also, I could not devote more than a few hours each week to analysis and filing.

“The actual writing did not begin until 1995, a year before I retired from UBC, and I was still gathering and analysing material until shortly before completion in late 2010. In order to make this accumulating information available to the language committee and the teachers, I provided them with a computer printout of my latest version almost every year until 2008.

“Possibly the greatest challenge for me was to make the information in the dictionary more accessible to the lay reader by avoiding the use of technical terminology. This took a lot of thought and time. I don’t know if I succeeded in this, but I certainly enjoyed trying!

“Finally, I have to say that from beginning to end I have enjoyed the friendship, cooperation, encouragement, and patience of people at every level within the Sechelt Nation. This made, and continues to make, working with them a pure pleasure.”