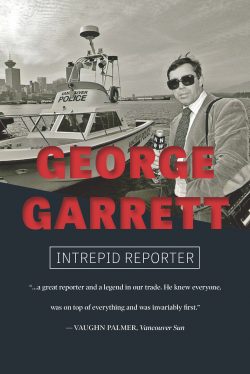 George Garrett: Intrepid Reporter is important reading for anyone interested in Vancouver politics and journalism in the last fifty years of the previous century. As a reporter for radio station CKNW from 1956 to 1999, with two interruptions, Garrett experienced a Vancouver that few in the city in those years experienced. Hastings and Main, because the Vancouver police station and the city’s police courts were nearby, was the principal geography of Garrett’s Vancouver. His subsidiary geographies were two courthouses: Vancouver’s, which the art gallery is today preparing to leave, and its successor; and New Westminster’s courthouse — and its successor.

At 312 Main Street, the Vancouver police station, miscreants were held, judged, and punished — addicts and drunks and hookers and petty thieves and street brawlers. (“I don’t know whether to condemn you or congratulate you,” said Judge Les Bewley to a 50-year-old prostitute.) At the two courthouses the heinous were judged and punished. “I can still picture Mr. Justice Harry Sullivan, in black robes with scarlet trim, donning a black skull cap,” relates Garrett. “With tears streaming down his face, Judge Sullivan said to [the murderer], ‘I sentence you to hang by the neck until you are dead.’” The 1957 fatal shooting that preceded conviction and sentencing occurred, of course, in a nightclub immediately south of Hastings and Main. The killer was not executed. 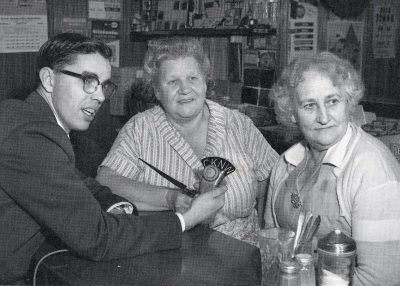 George Garrett wrote his autobiography because he hoped his grandchildren “might one day like to read about what their ‘Papa’ had done in his life.” What he did, of course, was share the stories of constables and detectives and judges and lawyers and politicians and labour leaders so well and for so long that he is one of 29 recipients of a lifetime-achievement award from the Jack Webster Foundation. (His supervisor at CKNW for most of those years, Warren Barker, is another.)

The exclusive was one of Garrett’s strengths. He was close to so many newsmakers, and he could keep a confidence. “Over the years I built up a list of contacts that was the envy of many of my colleagues.” Frequency of broadcast was another of his strengths. His employer wanted its listeners, and more importantly its advertisers, to hear his reports often. CKNW promised the sponsor of its first “news cruiser,” and this was 1958, that “several reports each night would mention their name … which meant I did a minimum of eight reports each shift, often more…. I was on the air a great deal.” 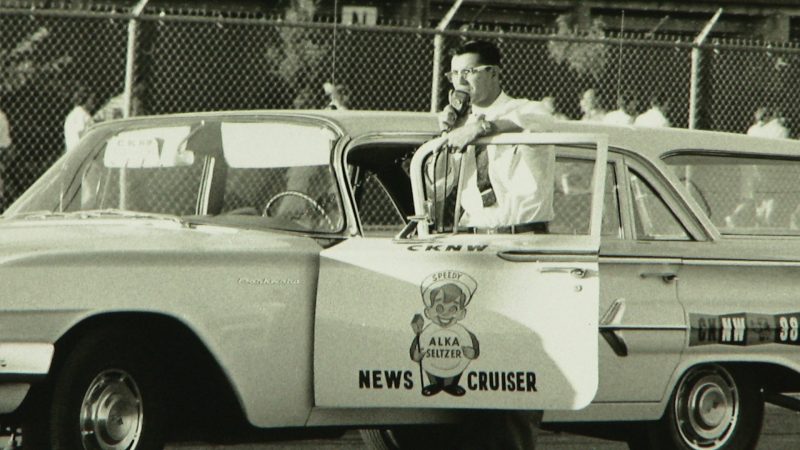 When George Garrett passed a CKNW shift in the vicinity of Hastings and Main he was working in just another North American skid row. At his retirement skid row was the Downtown Eastside neighbourhood. By 1999 the problems of the people residing in the vicinity of Hastings and Main had long energized and informed much of the municipal conversation. Further, by that year any number of the community’s leaders and champions were either municipal and provincial and federal lawmakers or on their way there. Larry Campbell, Libby Davies, the late Bruce Eriksen, the late Jim Green, Jenny Kwan, and Jean Swanson all experienced George Garrett’s Hastings and Main, but they do not figure much in Garrett’s memories. (He gave Larry Campbell’s telephone number to another reporter who needed an autopsy explanation from the chief coroner, and he does recall Downtown Eastside leaders lamenting management changes at the police department.)

What Garrett does do is provide an intimation of an explanation for the extraordinary reach today in Vancouver of Hastings and Main. Police and prosecutors daily criminalized the indigent who resided in the crossroad’s vicinity. Garrett witnessed that reach achieved with Criminal Code vagrancy and liquor regulation arrests and prosecutions and punishments. And he saw it done with drunks picked up and jailed, but never prosecuted just so the constables operating the paddy wagons could report they had been earning their keep.

Another insight in George Garrett: Intrepid Reporter concerns his contemporaries in Vancouver journalism, especially the influential and the acclaimed among them. Just enough of them passed Prairie childhoods for the historian to wonder about the role of Brandon and Dauphin and Gimli and Moose Jaw and North Battleford and the farm and the Depression and winter in the telling of the Vancouver story in the last fifty years of the previous century.

Both Garrett and Barker passed Prairie childhoods. Two of their contemporaries who died as George Garrett was going to press, sports columnist and author Jim Taylor and the legislative affairs columnist and civil servant, Barb McLintock, were also Prairie natives. Allan Fotheringham is, perhaps, the best-known member of the Prairie gang. Bruce Larsen is, perhaps, the least known. He was either Vancouver Sun managing editor or editor-in-chief from 1974 to 1988, and for almost 20 years before his managing editorship he was either a Sun or Province city editor or sports editor.

There is so much to learn from this autobiography. Read it. 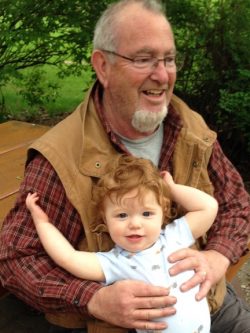 A retired Vancouver editor and reporter, Mike Sasges is the author of Once Well Beloved: Remembering a British Columbia Great War Sacrifice, to be published in the fall of 2019 by the Royal BC Museum. 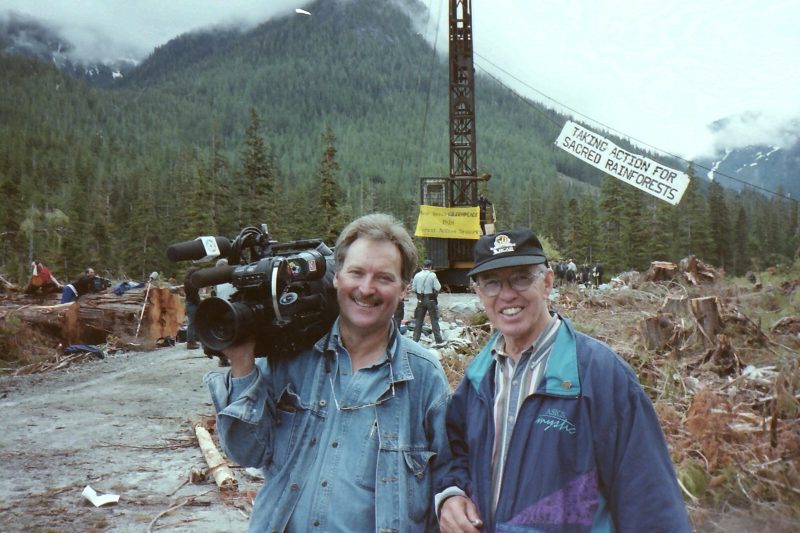 George Garrett and cameraman on scene at King Island in the Great Bear Rainforest during anti-logging protests, 1997 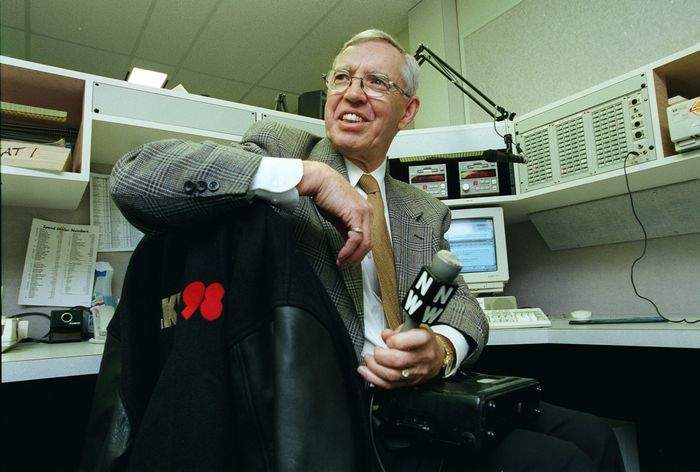