#461 Baskets across the border 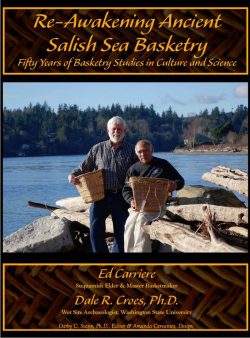 In this book Ed Carriere, a Suquamish basket maker with traditional training, and Dale Croes, an archaeologist with scientific training augmented by traditional instruction from Makah basket makers, share insights generated through their collaborative research on the foreshore basketry preserved for thousands of years in wet sites in Washington State and British Columbia. Part memoir, part chronicle, and part commentary, the story of their collaboration is told largely in counterpoint, with Ed Carriere’s account alternating with Dale Croes’.

Each recounts his early life and the training that led him to acquire his knowledge and experience and each comments on particular insights arising from his role in the collaboration. The two voices come together in a last section, entitled “Closing Thoughts.”

The authors’ collaboration brought together an Indigenous approach to basket making based on familial instruction through demonstration, observation, and emulation, with meticulous attention to the gathering and preparation of materials and the social context of basketry manufacture, and an archaeological approach to basketry research that works back from the finished basket or preserved fragment to determine its components and process of manufacture through formal analysis. It also brought together two different people, and the narrative is presented as a very human story, with photographs of the families of both authors, the houses built along the way by Carriere, and Dale Croes’ kindergarten class picture. 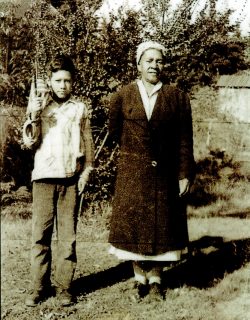 Ed Carriere was born in Washington State in 1934. He was raised by his great-grandmother, Julia Jacobs (1874-1962), who had been adopted in infancy by Suquamish Chief Wa-hal-chu and his wife Wes-i-dult. They spoke Lushootseed, a Salishan language spoken in the region of Puget Sound. From Julia Jacobs, Ed Carriere learned to gather and prepare cedar limbs for clam baskets. He made his first clam basket at the age of fourteen and used it to gather clams until it wore out. Following high school graduation he served as a U.S. Marine in the Korean War, married, raised a family, and pursued a career as a machinist. Ed Carriere returned to making baskets as an avocation in 1969, and focused on it as a principal interest following his retirement in 1988.

Born in 1947, Dale Croes graduated in 1969 from the University of Washington with a B.A. in anthropology, with a focus in archaeology. As a graduate student at Washington State University he excavated and analysed the basketry preserved in the village at Ozette, inundated and covered by a mudslide eight hundred years ago. 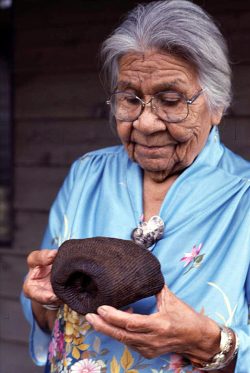 Through this early, pivotal, training — and additional wet site archaeology conducted during an eight-year tenure as the Washington State University Director of the Washington Archaeology Research Center following the completion of his Ph.D. and a subsequent career teaching at South Puget Sound Community College — he developed the specialized knowledge of ancient basketry on the Washington State coast and the analytic techniques that he brought to his collaboration with Ed Carriere.

The authors’ shared a connection with Isabell Ides (1900-2001), an expert basket maker who lived in the Makah community of Neah Bay, Washington. She had been a friend of Julia Jacobs, and Ed Carriere had known her from childhood. When she was eighty years old he had promised to make a basket for her 100th birthday. The Makah Nation, approaching the wet site excavation at Ozette in partnership with Washington State University, had stipulated that Dale Croes learn Makah basketry techniques from Isabell Ides and her sister, Lena McGee Claplanhoo, as part of his training for analysis of the basketry preserved at the site. Dale Croes’ friendship with Isabell Ides and other members of the Makah community continued, and in 2000 he attended Isabell Ides’ 100th birthday potlatch. Ed Carriere also travelled to this event to deliver the basket he had promised to make for her 100th birthday. 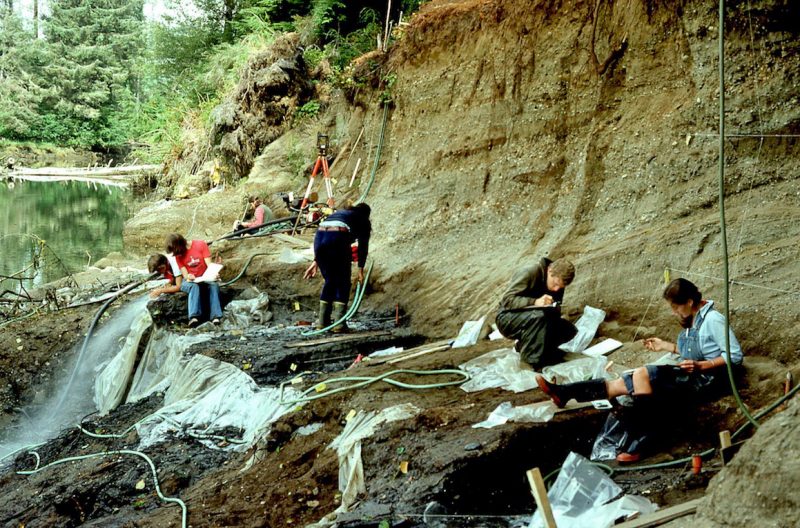 Dale Croes’ first excavation (1977) of the wet site at Hoko River on the Olympic Peninsula, where ancient basketry was recovered

Although they do not all figure in the collaboration in the same way, wet sites are also a central focus of this book. They fall into two sectors, with Ozette and the Hoko River site indicating broad cultural alignment with the Makah in Washington State and the Nuu-chah-nulth in Canada, and the Qwu?gwes site associated with Squaxin Island, the Fishtown and Conway sites on the Skagit River, the Biderbost site on the Snoqualmie River, and the Musqueam Northeast site on the Fraser River showing stronger cultural alignment with Coast Salish groups. 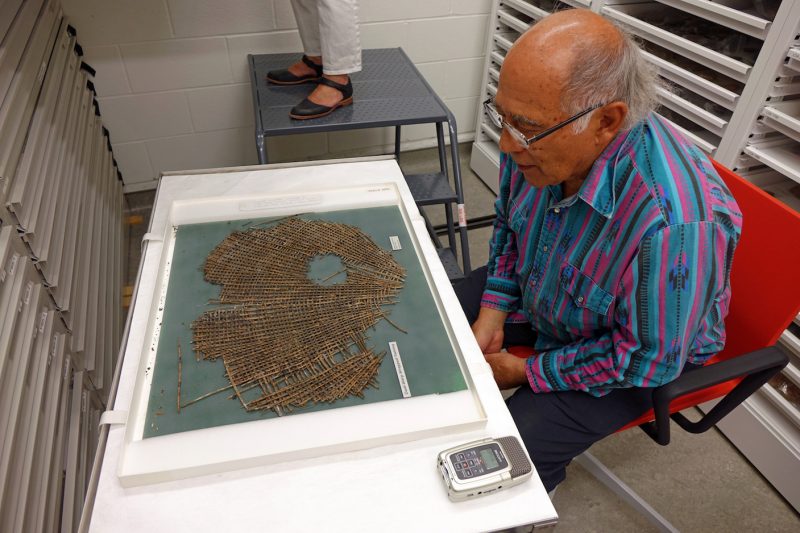 Ed Carriere at the UBC Museum of Anthropology, engrossed in a 4,500 year-old basket from Glenrose Cannery site on the Fraser River

At a gathering of the Northwest Native American Basketweavers’ Association hosted by the Squaxin Island tribe, Croes invited Carriere to view the basketry recovered from Qwu?gwes, a wet/waterlogged site excavated with the Squaxin Island Tribe and preserved in the Squaxin Island Tribe Museum Library and Research Center. In 2005 and 2006 they worked more closely on basketry recovered from Qwu?gwes, where Ed Carriere’s knowledge was instructive in the interpretation of the basketry, detritus, and tools found during further excavation at the site.

In 2014, an exhaustive investigation of basketry excavated in the 1950s and 1960s by the Washington Archaeology Society at the 2000 year-old Biderbost wet site on the banks of the Snoqualmie River, supplemented by microscopic examination and identification of plants and plant parts represented in the baskets, led to a collaborative analytic process that combined Croes’ formal identification of attributes and types with Carriere’s insights into the preparation and use of specific parts of the relevant plants. The process culminated in the replication of open work fine gauge pack baskets. The replication, which demanded minute study and emulation of the baskets from the wet site, led to new insights concerning the technical complexities of producing both the form and fabric of the baskets and the volume of materials required.

Croes and Carriere followed this work with a 2015 review at the University of British Columbia of collections from three Canadian wet sites, the Glenrose Cannery site (4500 years), the Water Hazard site (2000 years) and the Musqueam Northeast site (3000 years).

The results of this collaboration include a detailed presentation of the technical characteristics, particularly of Biderbost site basketry, a basket made by Ed Carriere that incorporated the major techniques observed in wet site foreshore basketry from the most ancient to the most recent, and conclusions about cultural transmission in the region represented by the wet sites studied. Forty years ago Makah basket makers recognized types of basketry excavated at Ozette and Hoko River. The correspondence between the basketry techniques and forms Ed Carriere had been taught to make, and the baskets at Salish Sea sites in regions that are culturally Coast Salish, also suggested that cultural transmission on the Washington coast had been sustained for generations.

Ed Carriere’s replication of a weave pattern from a 3,000 year-old basket found in the wet site at Musqueam on the Fraser River

Building on these conclusions, the authors have articulated the concept of generationally linked archaeology, an approach to research based on collaboration between community cultural specialists and archaeologists in areas where cultural continuity and transmission can be demonstrated to have occurred over a long period reaching to the present day.

Since 2015 the authors have travelled to Japan, and have presented the results of their work in local communities in Washington State, at gatherings of the Northwest Native American Basketweavers’ Association, and at academic gatherings in the United States and England. Their collaboration was continuing as the book was finished in 2017. 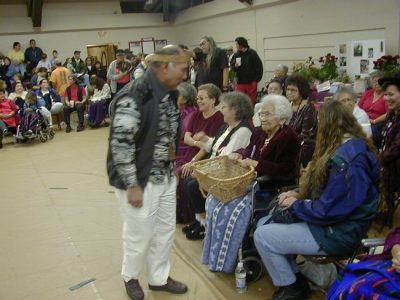 Re-awakening Ancient Salish Sea Basketry: Fifty Years of Basketry Studies in Culture and Science is an innovative contribution to the literature on both the collaborative experience and Northwest Coast basketry. Written in language that is as free of jargon as possible when dealing with a highly technical subject, and with short, summary introductions to each section, it offers a clear and comprehensible narrative without downplaying the technical complexity of basketry construction and analysis from either the Suquamish or archaeological perspectives.

The book is accessible to readers who do not necessarily have training in either basketry or archaeology. Clear photographs of the technical processes demonstrated by Carriere and diagrams of both the specific basketry techniques involved and the broader relationships among the wet sites proposed by Croes supplement the text. 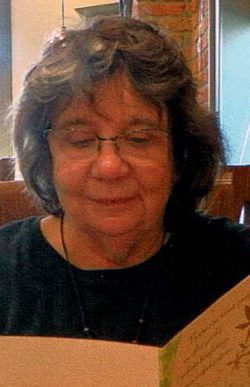 A specialist in the ethnography and material culture of British Columbia First Nations, Andrea Laforet (Ph.D. UBC 1974) retired as Director of Ethnology and Cultural Studies at the Canadian Museum of Civilization in 2009 and continues to work independently with First Nations on current issues relating to ethnography and history. 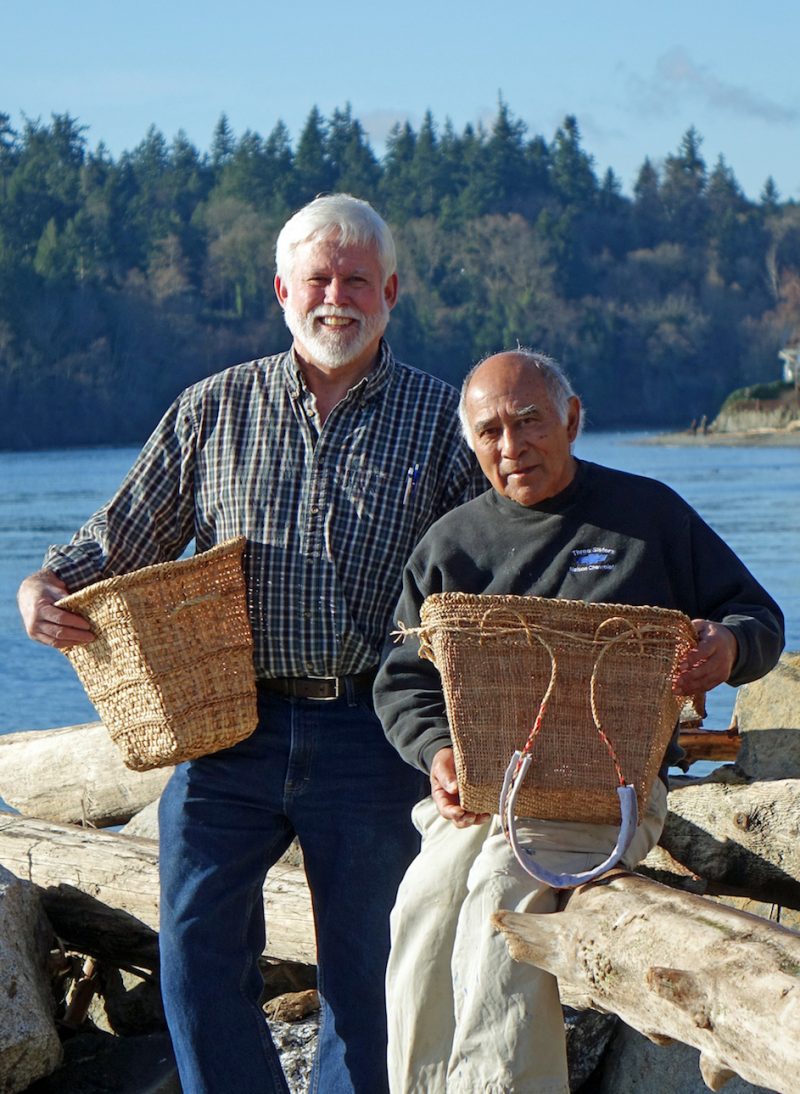 Dale Croes and Ed Carriere with their replicas of baskets from the Biderbost Site on the Snoqualmie River, Washington State 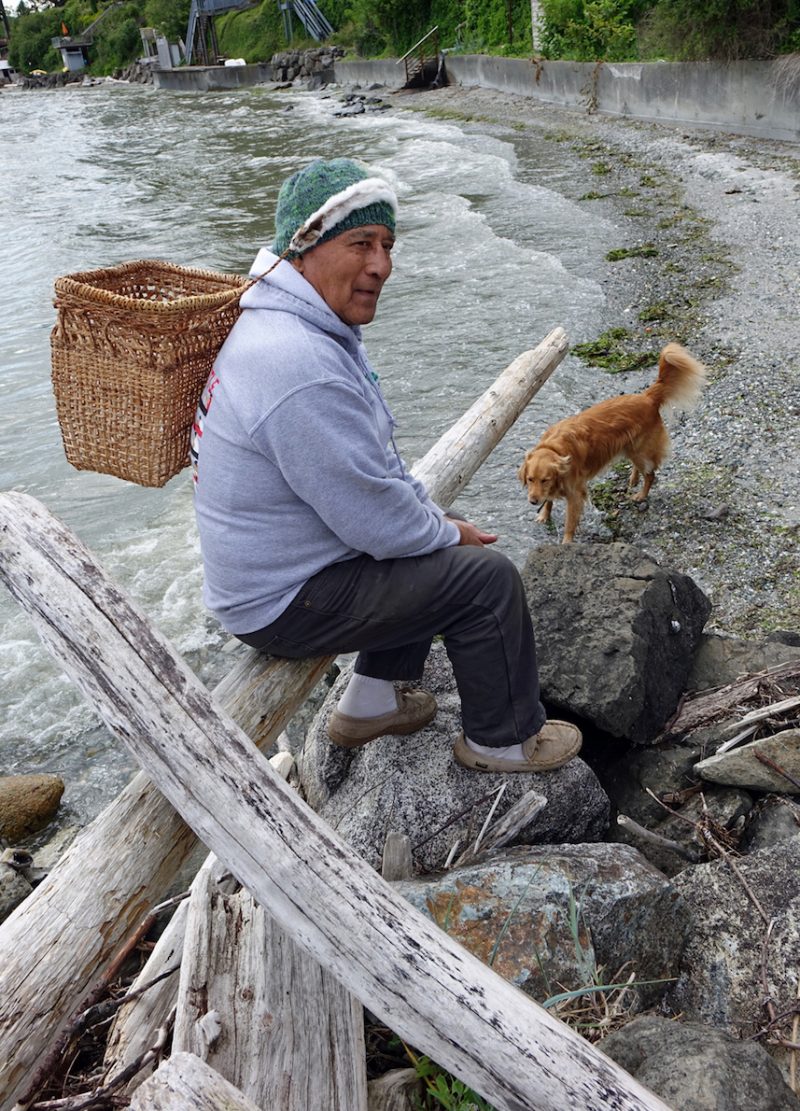 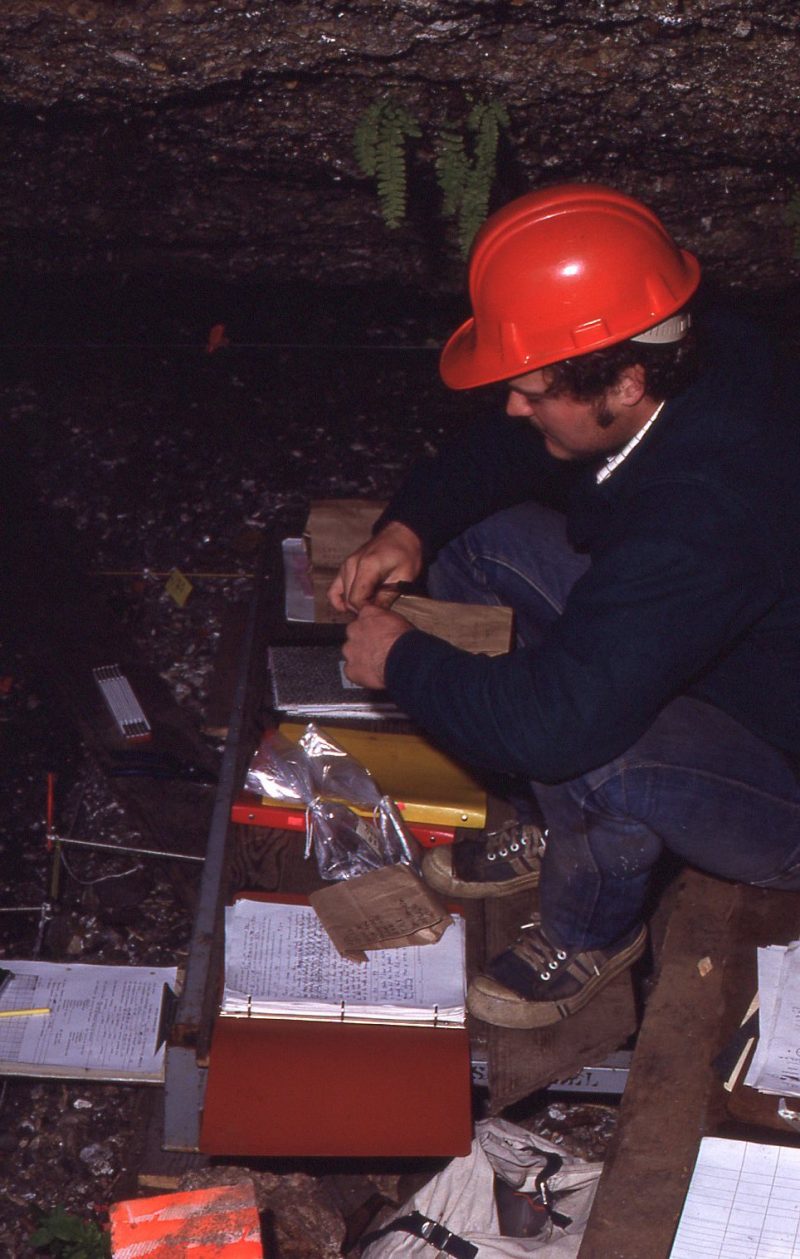