One Hundred Years of Struggle: the History of Women and the Vote in Canada 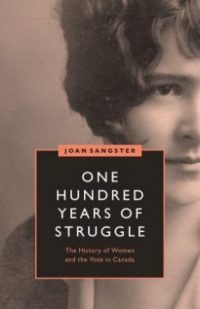 Joan Sangster’s clear, concise, and lively treatment of the women’s suffrage movement in Canada provides a broad historical survey while presenting an analysis that goes beyond the usual popular accounts. As Sangster shows, historical treatments of the Canadian suffrage movement have tended to emphasize “famous firsts” (p. 2) and centre on a few high-profile figures such as Nellie McClung, women whose reasoned, civil arguments are frequently contrasted to the militant — and more exciting — activism of British suffragettes.

One of the book’s many virtues is its vivid portraits of other, less remembered historical figures, an approach that allows for an appreciation of the multi-dimensional character of the suffrage movement in Canada. Sangster’s nuanced treatment of her subject rejects easy over-simplification. She eschews the schematic characterization of suffragists as either maternal feminists, who emphasized women’s roles as mothers to justify political participation, or equal rights feminists who focused on simple justice and equality. Instead, the advocates for suffrage she presents defy such simple characterization. Nor do they lend themselves to hagiography. There are, Sangster admits, “no unambiguous heroines” (p. 274). 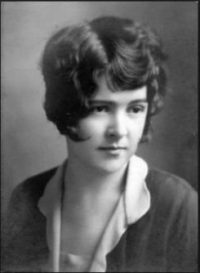 Women’s rights advocate Judge Emily Murphy’s eugenicist views are well known; she decried the “wanton” reproduction of the criminal and infirm, condemning prostitutes as “feeble-minded” nitwits (p. 111). Sangster likens her to the television “Judge Judy,” who dispenses harsh lectures along with harsh sentences. McClung herself, who inevitably wins praise for her intelligent parodies of anti-suffrage arguments, stood opposed to the workers in the Winnipeg General Strike, parting company with other sympathetic women activists. McClung also privately suggested to Prime Minister Robert Borden that only Canadian and English women should receive the vote, and not foreign born women, a position she later reversed (p. 196). The Vancouver city alderman Helena Gutteridge, featured on the book’s cover, came to British Columbia armed with experience in the British labour movement, and readily confronted men in the Vancouver Trades and Labour Council who failed to grasp that unequal treatment from men of their own class posed as much a problem as employers. Gutteridge embraced social causes in local politics, including low rental housing and public utilities. Yet she accepted the TLC’s whites only labour policy in Vancouver’s hotel industry. 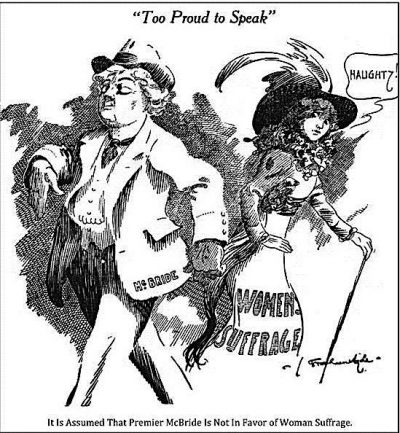 Gutteridge’s situational progressivism exemplifies one of the book’s best features: the degree to which it presents the suffrage issue as one that intersected with race and class. Sangster also shows how wider social reform agenda, in particular the temperance movement, intersected with the suffrage question. Her analysis takes careful account of historical context. The question of suffrage, Sangster persuasively shows, was tied to many other forms of inequality and power struggles. Those who advocated a more sweeping struggle against capitalism or racial inequality sometimes disagreed about which battle should take priority.

Sangster’s treatment of those opposed to women’s suffrage offers insight into the substantial barriers to progress: the stature and persuasive powers of those elite champions of the status quo. Stephen Leacock, a witty and insightful author and political economist of international renown, pilloried the “Awful Woman with the Spectacles,” of whom modern men, “losing something of their ruder fibre, grew afraid” (p. 114). Leacock presented his opposition to women’s suffrage as part of a wider appeal for the preservation of an idealized past and a rejection of American materialist values. 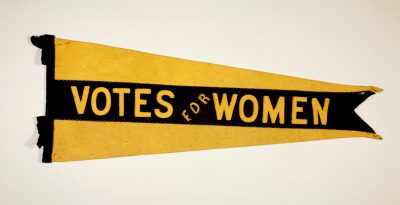 The image of mothers baking home-made pies was juxtaposed with busy apartment life in which children had no place and entertaining was done through caterers. The Oxford historian Goldwin Smith, who took up residence in Toronto, had left Cornell University “in a huff when it went co-ed” (p. 117). Clementina Fessenden, the widow of an Anglican minister, energetically poured out her views on the sanctity of the family in a series of Hamilton newspaper columns, in letters, and in leaflets, drawing on her connections with like-minded British writers. Ignorant poor women, who were deemed apt to neglect their children, were especially unfitted for the franchise, in Fessenden’s view. 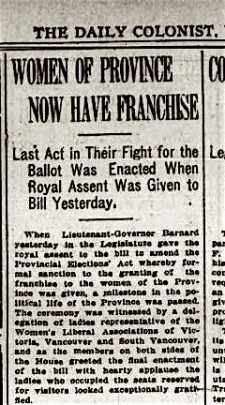 The Association Opposed to Woman Suffrage, founded in Toronto in 1913, attracted women with “a clear sense of their gendered class interests.” Sangster crisply observes that their punishing schedule of teas, balls, and club meetings required a “fashion budget” (p. 130). One Hundred Years of Struggle also provides illuminating images, especially cartoons in which suffragists are inevitably portrayed as unattractive harridans. The accomplished and adventurous Quebec suffragist Idola Saint-Jean was sneeringly dismissed as an “old maid” by her many detractors (p. 206).

Some chapters in the book consider the suffrage movement in the context of other complicating historical events and issues. The Great War is a case in point, with some suffragists optimistically hoping that politically engaged women would be able to prevent such catastrophes in future and others — or even the same women — wholeheartedly condemning opposition to the war as disloyalty, even treason. Their ideas, Sangster explains, were “shaped by more than ideas about women’s innate maternalism,” and were influenced by “ethnic and racial loyalty to Britain and the empire,” especially in the case of recent British immigrants (p. 186). 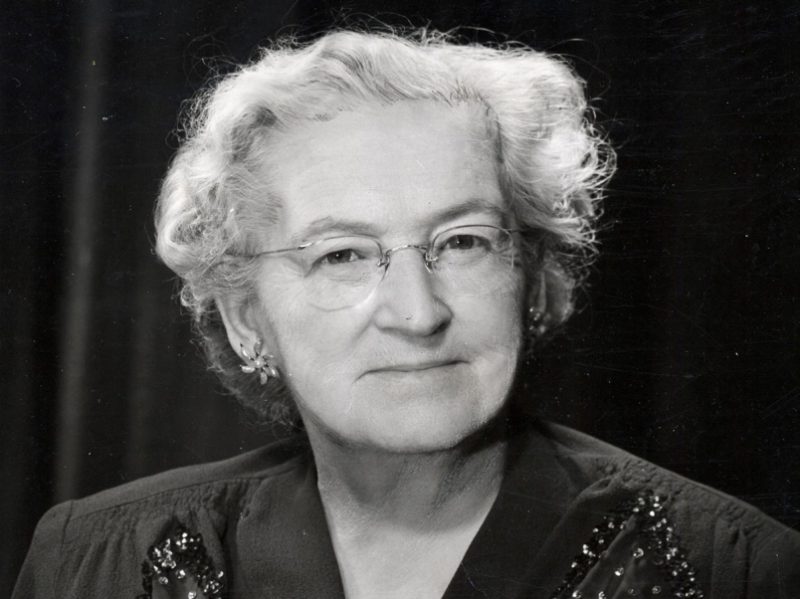 Nellie McClung (1873-1951) lived in Victoria from 1933 until her death. Victoria Times-Colonist photo

In addition to providing useful international context, Sangster’s analysis also considers the suffrage issue in separate provinces. Suffragists in Quebec had the additional burden of overcoming perceptions that the vote would undercut Roman Catholic values about women and the family. For aboriginal women, the issue was complicated by the fact that, before 1960, enfranchisement could only be achieved by means of a loss of Indian Status. 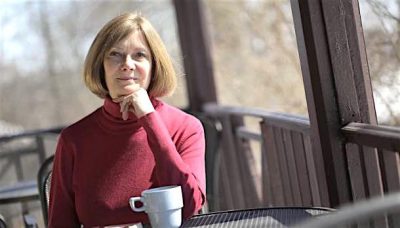 One Hundred Years of Struggle succeeds remarkably well in presenting ideas in an accessible way without oversimplifying them, a difficult task to achieve. It provides unobtrusive explanations of ideas and terms that might be unfamiliar to readers; for example, a text box provides a definition of the label “bluestocking,” the eighteenth-century word for women who gathered for intellectual discussions. Sangster wryly notes that these women were inevitably portrayed as pedantic, pretentious, overbearing, “and, of course, ugly” (p. 127).

But even while the book is accessible, it avoids the trap of easy structural categories that can distort. For example, Sangster rejects the usual paradigm of successive “waves” of feminism: suffrage, second (1960s), and third (1990s). This common framework, Sangster complains, blinds us to the ongoing activism of the periods in between. The book is in itself a great antidote to that distorted and incomplete view. 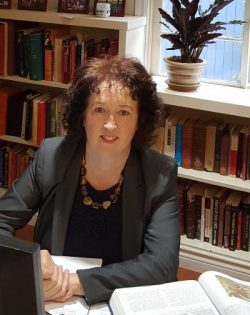 Barbara J. Messamore (Ph.D., Edinburgh) is an associate professor of history at University of the Fraser Valley. She is the author of Canada’s Governors General, 1847-1878: Biography and Constitutional Evolution (University of Toronto Press, 2006), co-author of Conflict and Compromise: Pre-Confederation Canadian History (University of Toronto, 2017), and co-founder of the Journal of Historical Biography. She often writes on constitutional and political history. 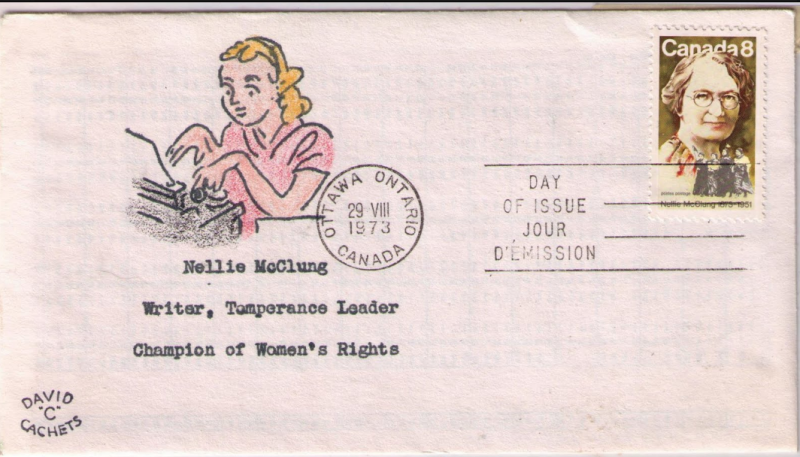