On the Curve: The Life and Art of Sybil Andrews
by Janet Nicol, with a foreword by Robin Laurence

See with Your Own Eyes: The Sybil Andrews Story
by Laura Ellyn 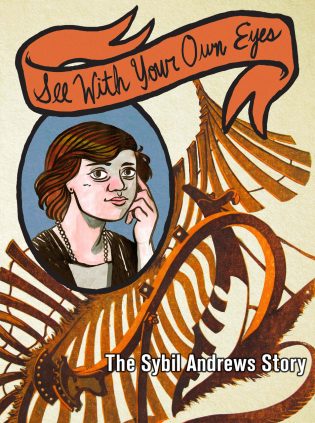 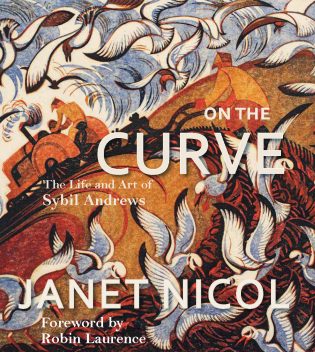 If you haven’t heard of Sybil Andrews, here are a couple of books that will introduce you to this British-Canadian artist who spent the last half of her life in semi-obscurity on Vancouver Island.

The Janet Nicol book is the more serious of the two, a fairly conventional biography just brimming with wonderful reproductions of Andrews’ artwork, mostly abstract-expressionist linocut prints on such subjects as men using sledgehammers, men driving logging trucks, men in plaid shirts at a coffee bar, men shearing sheep, a man dying on a cross (Jesus), and a man being pierced with arrows (St. Edmund, the patron saint of Bury St. Edmunds, Sybil Andrews’ home town in England). 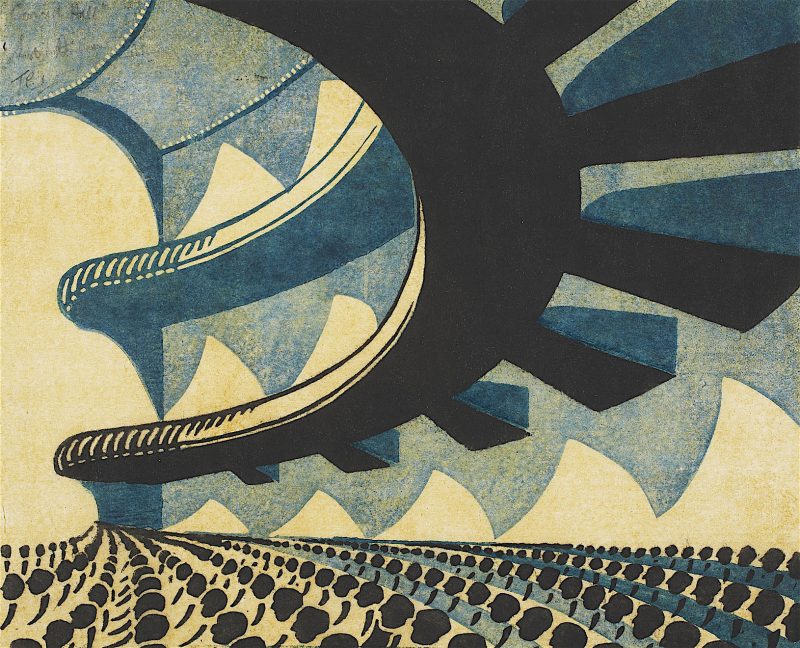 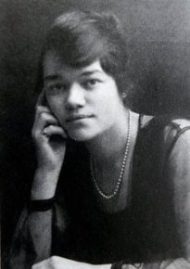 Andrews liked to depict men. Both Nicol and Ellyn say this is because she was drawn to labour, and thus labouring men, but I think it’s because of the men. Men were highly important in Andrews’ life, though it is sometimes hard to see that in these two biographies because of their attempt to place Andrews in the history of feminism. It is important of course to find a guiding pattern in writing a biography to avoid it becoming a mere chronology, but the two biographers seem to have latched onto the wrong one.

Nicol notes that when Andrews was nine, a suffragette visited her home town, and when women got the vote, Andrews voted. And of course she was a woman making her way in a male-dominated field, and lots of her art students in later life were female; also her life was spent during a time of increasing rights for women. But what does that tell us?

No, I think we have to look elsewhere for the engine driving the life of Sybil Andrews.

She was born in 1898 in Bury St. Edmunds in Suffolk and later said that though she spent half of her life in British Columbia, her core was still from Suffolk. Her family was fairly well off; there were servants and a governess, and her grandfather owned an ironmonger business. However, his son Charles (Andrews’ father) was a troubled man, not at home in the business, and though he married and fathered five children (Sybil was the third), he suddenly picked up and left, abandoning his wife and children for what seems to have been a fairly unproductive life in Saskatchewan, doing odd jobs and dying a dozen years later. It seems he felt repressed at home, having artistic talent himself but not being encouraged to pursue an artistic life. And yet when he escaped to Canada he did not pursue art there either.

He did, however, in letters written to her from afar, encourage Sybil to pursue her artistic desires, which she did even though the outbreak of World War One meant she had to take up work as a welder, which led to her writing an amusing poem beginning: “Ten little welder girls sitting in a line/ One blew up her safety valve, then there were nine.” 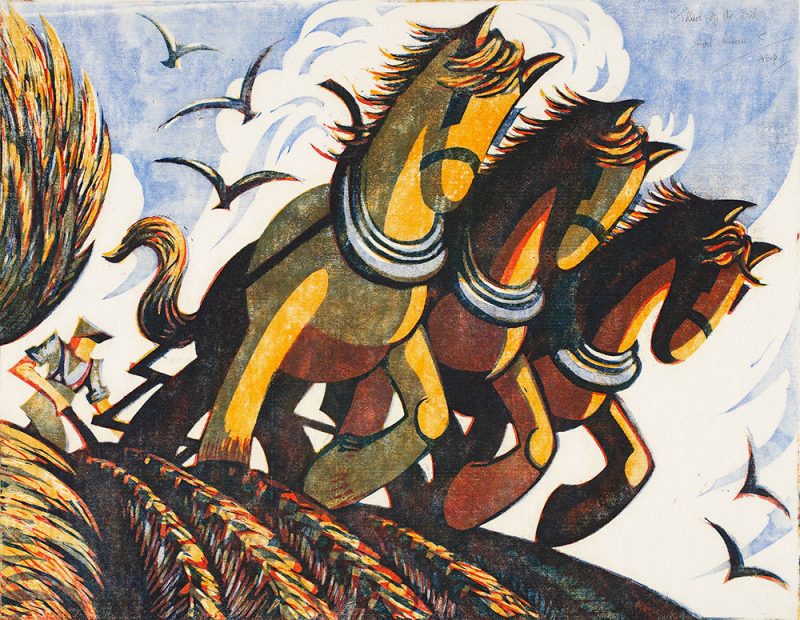 “Tillers of the Soil,” 1934, an English rural scene from before Andrews came to Canada. Glenbow Museum and Archives

Andrews dabbled in poetry and music, but her main artistic field was the visual arts, especially the new medium of linocut prints: prints made from a linoleum backing (instead of the older method of woodcuts). She learned this from her instructor at art school in London, Claude Flight, who arranged for Andrews’ first exhibitions, as part of general exhibitions of his other students.

Andrews won praise but few sales during the London period of her life between the wars, a time when she shared a studio and living space with fellow artist Cyril Power, who left his wife and family to be with her. Is this the pattern in Andrews’ life: men leaving families? Was she seeking a father figure in Power (who was 26 years older)? Were they even lovers? (There is some dispute.) We need to know more about what drove her father away and brought Cyril Power to her. 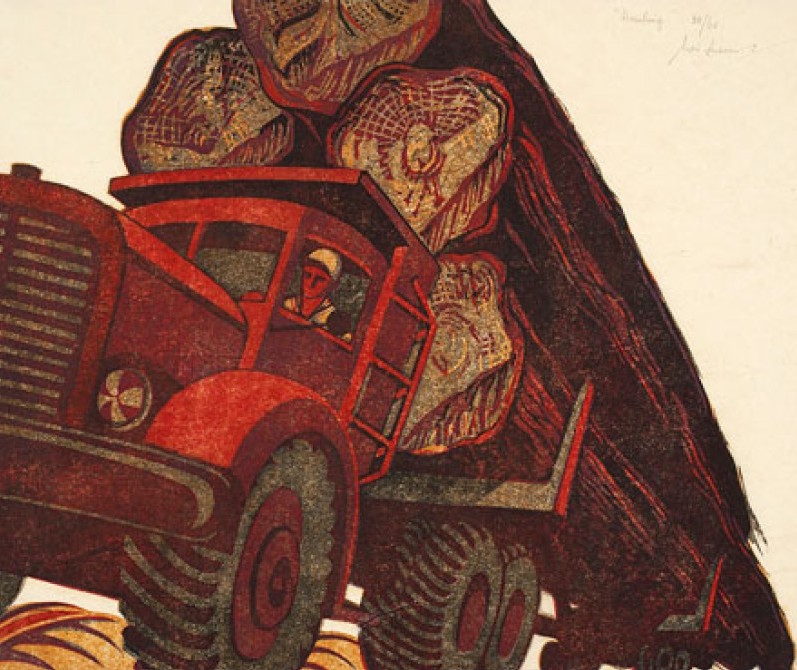 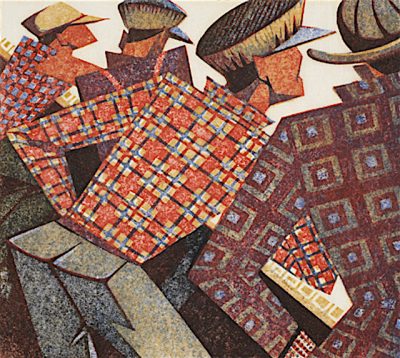 And then abruptly, on the eve of World War Two, she and Power went their separate ways, she did war work again (shipbuilding this time), met the man who would become her husband, Walter Morgan, and after the war set off for British Columbia.

Why, one might ask? Again, this is an area that deserves further exploration. One of the biographers quotes her as talking of postwar devastation, the rigid class structure, and her husband’s longstanding desire to move to Canada’s west coast (why again?). Did Andrews feel imprisoned in some way? Even before the war she left London (and Power) for the New Forest in England, and now she was going even further away from the centres of civilization and the art world.

Perhaps that was the attraction. One of the biographers says linocuts became passé after the war; perhaps Andrews felt out of step? Perhaps she wanted to withdraw and build a cabin in the wilderness with her one-armed boat-building husband? Who knows? (But perhaps someone can find out? Someone who can scour the sources, Andrews’ letters and diaries, and talk more to her students and friends.) 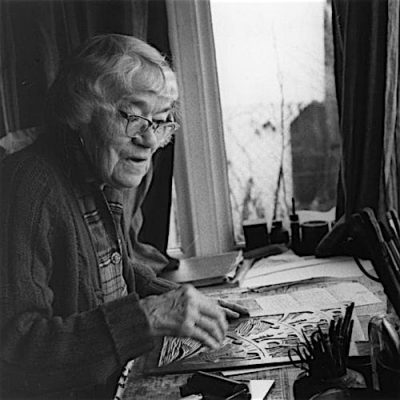 Sybil Andrews at her Willow Point cottage in the 1980s. Glenbow Museum and Archives

Eventually, Andrews began producing and exhibiting art in British Columbia, and became known more widely thanks to curators and art dealers in Victoria, Vancouver, and London and at the Glenbow Museum in Calgary. She seems to have been oddly passive in all this; though Nicol talks of her “navigating” the “male-dominated” art world, it’s more that she drifted or moored in a distant harbour waiting for male mentors and impresarios.

Fame is not the important thing, she said, and focused on doing her work and teaching art classes in Campbell River. And yet she found a bit of fame despite herself; it gives hope to artistic people who know nothing about marketing.

But what was driving her in all this? Some psychological trauma left over from her father’s abandonment? A need for surrogate father figures? Or was it her religion? 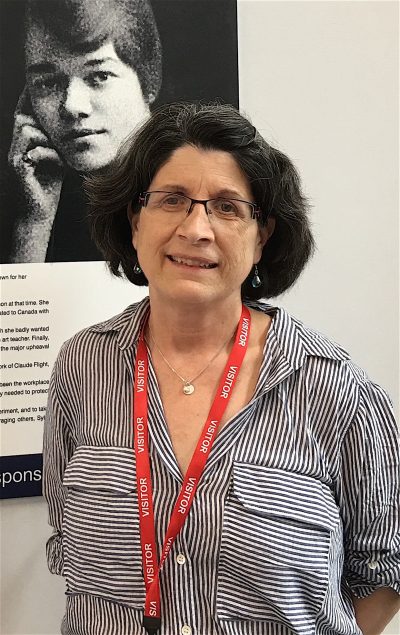 Mentioned but quickly passed over in the biographies is that Andrews was a lifelong Christian Scientist, following a religion that puts spirituality ahead of physical reality, that even questions the existence of physical reality. In describing her art, Andrews said it went beyond physical representation to bring out spiritual essences. Was she drawing on her religious faith here?

She certainly drew on her faith in her series of linocuts on the story of the crucifixion, spending thirty years producing prints of ten of the fourteen Stations of the Cross, including a memorable one of Jesus on the cross. How did that fit in with her life’s arc?

So many questions raised by these two books, both brief, one full of Andrews’ art to illustrate a fairly short text, the other a graphic novel full of Laura Ellyn’s art. Why did Andrews’ father flee, how did that affect her and the rest of her family, why did she flee from England and the art world — leaving her feeling quite homesick at times. What was the nature of her relationship with Cyril Power? How did Power’s abandonment of his own family affect Andrews (and of course Power’s family, who in later years became close with Andrews: how odd, one thinks).

Why did she stay in Campbell River if she was homesick for England and for the art world? Or was she tired of the art world? What inspiration did she draw from her religion and how did that inform her work? One can see in the abstract expressionism Andrews followed a similarity to Christian Science, with its getting away from realistic representation and its emphasis on lines and angles and curves. She was on the curve, as Janet Nicol says, but why? 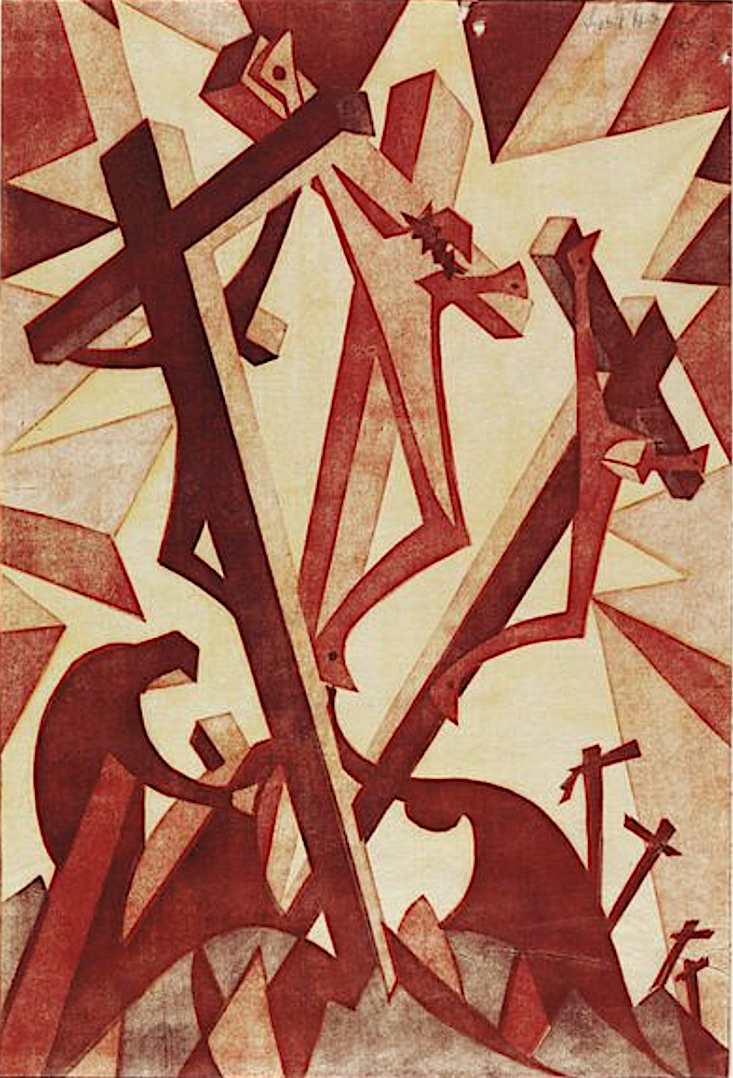 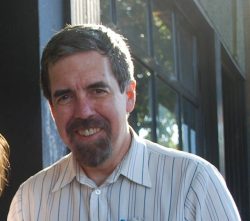 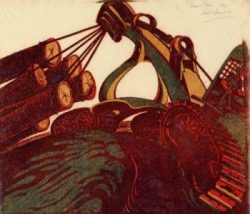 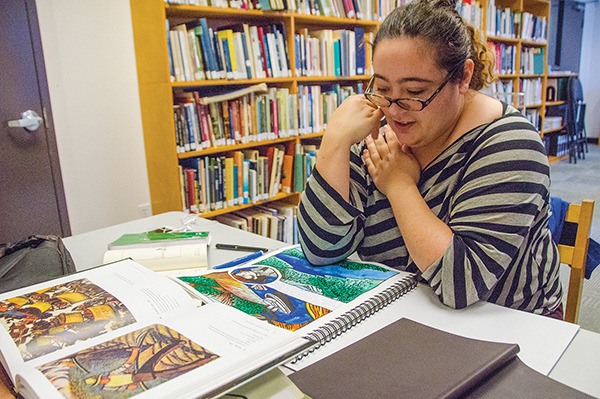