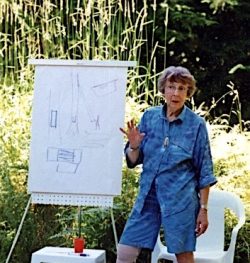 Hilary Stewart at home on Quadra Island in 1996. Photo by Dale Croes.

Editor’s Note: Born in Saint Lucia in the West Indies in 1924, Hilary Majendie Stewart was educated at a boarding school in England, spent six years in the armed forces in the Second World War and four years at Saint Martin’s School of Art in London, and emigrated to Canada in 1951.

She worked as Art Director for CHEK TV in Victoria and CHAN TV in Vancouver (now BCTV) while working on archaeology excavations, including the Old Musqueam site in Vancouver (1968) and the Katz site near Hope (1971) where, first-hand, she gathered material and context for her first book, Indian Artifacts of the Northwest Coast (Hancock House, 1973).

She went on to write another ten books, including the much-reprinted Indian Fishing: Early Methods on the Northwest Coast (J.J. Douglas, 1977), the 40th anniversary edition of which is reviewed here by Dana Lepofsky of Simon Fraser University.

Lepofsky introduces Indian Fishing to a new generation, noting that, “In 1977, Stewart was way ahead of her time in recognizing that the spiritual and the practical could not be separated in traditional Northwest Coast fisheries.”

Harvests from the sea, Lepofsky continues, involved “prayers, not making noise, not harvesting more than you need, controlling net size and harvest location, returning bones to the ocean, and always treating fish with respect. This represents the antithesis of big-business industrial fisheries.” 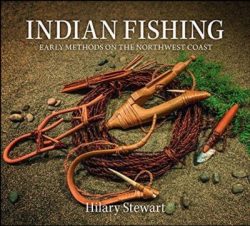 I opened the email that contained the request to write this review of the re-issue of Hilary Stewart’s (1977) Indian Fishing on a sunny day in early March 2018. At the time, I was in a car driving with friends to French Creek from Nanaimo, on Vancouver Island. Our conversation was about other friends who last fall transported a special boat, called a “packer,” from Vancouver to Mexico to support a large, Korean-owned pelagic tuna farm.

In this operation, baby blue fin tuna are caught and put in ocean pens where they are fed live sardines. The sardines were caught by local fishers and then stored in the packer (~135 tons of sardines per packer) to feed the penned tuna until they are large enough to sell (~70-80 kg after processing). The large tunas, gutted and deheaded many hundreds at a time, are then flown within 48 hours to Tokyo, where there are sold, by the gram, as sushi-grade.

We marvelled at the many costs of such an operation, including removing the sardines — an important forage fish — from the ocean’s food web, precluding the sardines from being eaten by local people, and the huge amounts of fossil fuel required to support this intensive, trans-Pacific, elite fishery.

Minutes later, once in French Creek, we were treated to the burst of life that means Pacific herring were spawning. The ocean was a turquoise blue from the milky milt, and eagles, gulls, and sea lions abounded. There was another tell-tail sign of the herring’s arrival: over 65 seine boats just off-shore, vying for their catch of adult female herring. Once caught, their roe sacs are extracted and sent to Japan as a supposed delicacy (“kazunoko”). 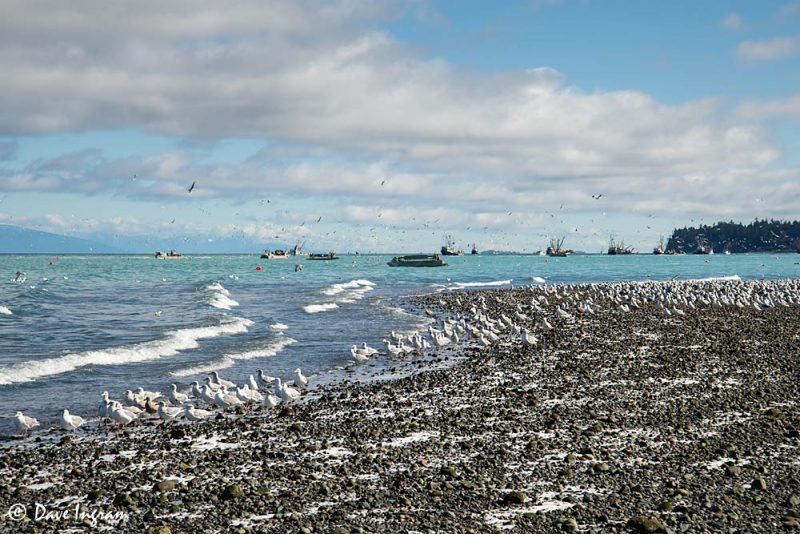 These seine boats represent yet another bizarre twist in today’s fishery methods. Despite the fact that herring populations have declined and are threatened throughout Canada’s west coast, that First Nations and some other local fishers are calling for region-wide moratoria to protect the remaining stocks, and that kazunoko is no longer considered a delicacy by many of the younger Japanese population (Shingo Hamada, personal communication, 2018), Canada continues to harvest herring at as high a rate as it can. 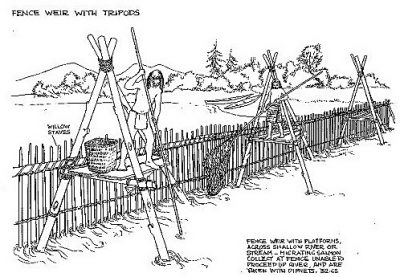 There is a stark and unsettling difference between the fishery knowledge and practice represented in Hilary’s Stewart’s book and the deep-sea tuna pens, the commercial herring roe fishery, or so many other examples of modern industrial fishing around the world. We now widely understand that careful resource management protocols and a deep commitment to conservation of resources were cornerstones of Indigenous knowledge systems (e.g., Anderson 2014; Turner 2005; 2014). This is reflected in the ethnographic and archaeological records from many parts of the world that indicate sustained harvests of marine foods over hundreds or thousands of years (Harris and Weisler 2017; McKechnie et al. 2014).

Hilary Stewart’s book gives insights into not just the intricacies of fishing technology, but the breadth and depth of traditional marine ecological knowledge held by Indigenous peoples of the Northwest Coast. Although she doesn’t name it as such, she also documents the larger management systems in which this knowledge is contextualized and enacted. 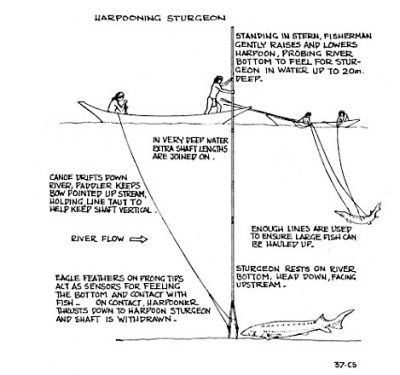 Indian Fishing most obviously details the huge diversity of techniques and tools (portable and stationary) used by coastal First Nations to capture and process finfish. However, it also hints at the extensive ecological knowledge required to harvest and process these fish, the complex systems of ownership of marine resources and marine spaces, and the ethic and indeed worldview that underlies how people interact with their non-human kin (e.g., Gauvreau et al. Johnsen 2009; Langdon 2006; Lepofsky and Caldwell 2013; Mathews and Turner 2017; Thornton et al. 2015).

This ethic tells people about the right way to behave to ensure future harvests. These right ways include prayers, not making noise, not harvesting more than you need, controlling net size and harvest location, returning bones to the ocean, and always treating fish with respect. This represents the antithesis of big-business industrial fisheries.

In short, Northwest Coast marine management systems represent the results of thousands of years of accumulated local knowledge — including both mistakes and innovations, wrapped up in management systems that are grounded in local needs and experience. 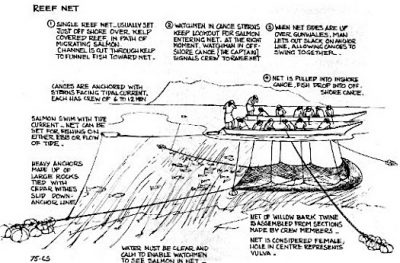 In 1977, Stewart was way ahead of her time in recognizing that the spiritual and the practical could not be separated in traditional Northwest Coast fisheries. As Michael Kew points out in his Foreword to the original edition of the book, it is significant that Stewart chose to both start and end her book with a discussion of the spiritual beliefs embedded in Northwest Coast fishing.

The “First Salmon Ceremony” is among the better known of these rituals and is summarized in detail by Stewart in her last chapter. However, Stewart also recounts smaller, daily actions and prayers that were equally important, as were the fish images displayed on baskets, carvings, and rock art. These prayers, as well as songs, provide clues about ecological knowledge, such as the sequence of fish migrations, as well as a means to communicate with the fish spirits. Such communication, coupled with respectful actions, ensured that fish would return every year. Collectively, these spiritual acts reflect the complex and age-old relationships Northwest Coast peoples had with their marine ecosystems.

In Stewart’s book, she draws on diverse kinds of knowledge and evidence to recount traditional fishing systems. As Stewart herself explains, she compiled the details presented in this book through various means. While she was often unable to observe the use of these technologies first hand, she assembled information from discussions with local Indigenous knowledge holders, ethnographic texts, and archaeological and museum specimens.

From early on in her career (which started with being part of archaeology excavations in the Salish region), Stewart understood the power and potential of blending knowledge and data from these diverse sources. This has always been one of the hallmarks of her game-changing career. As a result of her broad perspective — coupled with her informative and beautiful sketches — this compendium on fishing goes beyond the culture lists of early ethnographers and instead breathes the lives of people into her descriptions.

Indian Fishing, though originally published over forty years ago, has more than withstood the test of time. One area noticeably missing from her presentation is the choice not to include shellfish in her compendium on “fishing.” Almost certainly this was in part an editorial decision to contain the book’s scope. But I suspect it may have also been due to the then widely held belief that shellfish was not as important as finfish to First Nations. 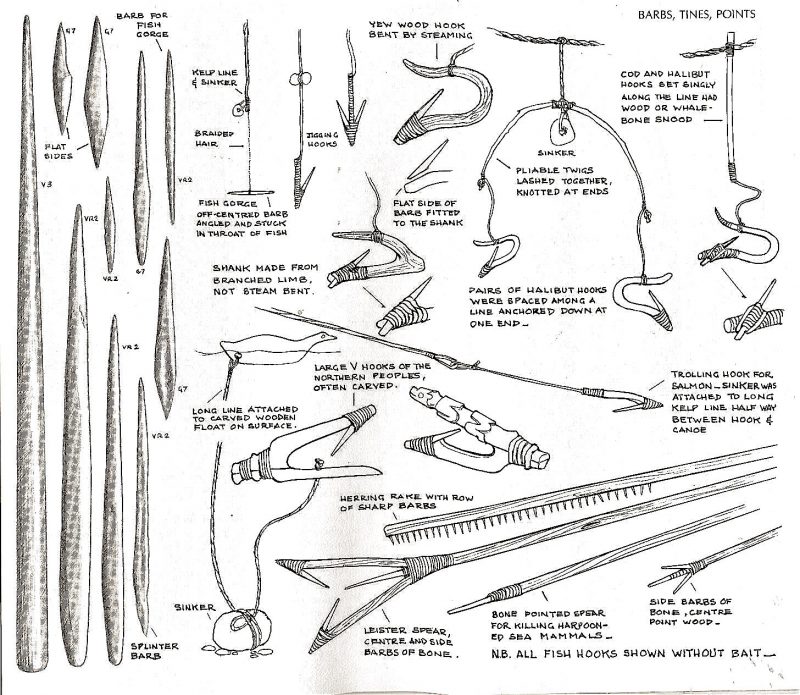 Of course, the thousands of meters-high shell middens along the coast counter this notion, as does the coast-wide documentation of “clam gardens” — constructed intertidal terraces created to increase the productivity of clams and other valued marine resources (Deur et al. 2015; Lepofsky et al. 2015; https://clamgarden.com/ ). 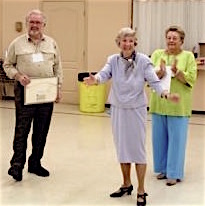 There is so much that is important in this volume. I find it to be a bit like the ethnographies that Stewart relied on for sources. That is, every time I open the book, I discover another rich detail that I missed in my previous read. At perhaps a deeper level, this book is about the inexorable linkages between cultural and biological diversity and about Indigenous rights to manage their fisheries in their traditional lands (Harris 2008)– applying their local and hard-won knowledge of marine ecosystems and governance.

Stewart writes in her preface to the 1994 edition that in 1978 the government of British Columbia gave a copy of this book to every school in the province. I wonder how much of the knowledge embedded in this book is integrated into public classroom teaching — knowledge about how to respect all the beings in world around us. We would do well to listen to voices that are represented in this important — and still relevant — book.

Post-script: I would like to dedicate this review to Clan Chief Kwaxsistalla Adam Dick, whose passing in July 30, 2018 left a big hole in our collective knowledge of Northwest Coast culture. Adam taught me much about traditional fishing practices and more importantly, the cultural context in which these practices are embedded — Dana Lepofsky. 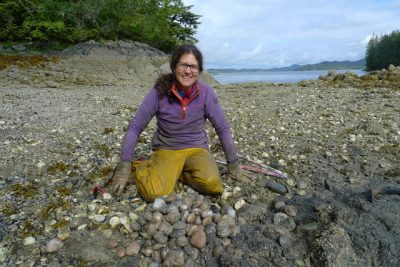 Dana Lepofsky is a professor in the Department of Archaeology, Simon Fraser University. Her research program is focused on documenting how Northwest Coast peoples interacted with their environment and situating this ancient knowledge in current social and ecological contexts. Dana is fortunate to collaborate with and learn from both First Nations knowledge holders throughout the coast and academic researchers from diverse disciplines. Her current research focuses on ancient clam gardens (www.clamgarden.com), the use and management of herring (www.pacificherring.org), and documenting management and use in culturally valued landscapes (http://www.hauyat.ca/ ). Dana Lepofsky received her BA at the University of Michigan, her MA at UBC, and her PhD from the University of California at Berkeley. Since 2013 she has been co-editor of the Journal of Ethnobiology. 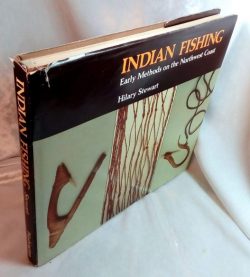 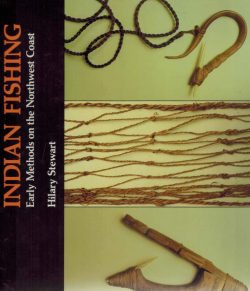 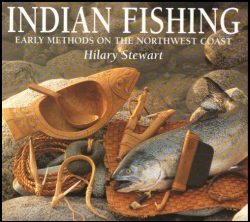 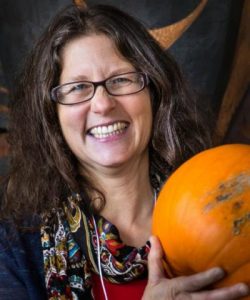