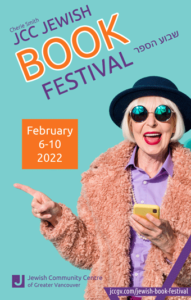 Several BC authors will be at the 37th annual JCC Jewish Book Festival from February 6 – 10 this year including: Isa Milman with her memoir Afterlight: In Search of Poetry, History and Home (Heritage House $24.95), Rachel Mines with her translation of Jonah Rosenfeld’s The Rivals and Other Stories (Syracuse University Press $24.95), and in an Epilogue with profound interlaced roots in our community, Robert Krell who wrote the memoir Sounds from Silence (Amsterdam Publishers) will accompany Alan Twigg as he launches his comprehensive literary history Out Of Hiding: Holocaust Literature Of British Columbia (Ronsdale $21.95), which is an event that will be moderated by Yosef Wosk.

The JCC’s annual Book Clubs event features bestselling Australian author HEATHER MORRIS with her novel Three Sisters, the last in the Tattooist of Auschwitz trilogy that has taken the world by storm.

Closing Night features DANIEL SOKATCH, an expert who understands both sides of one of the world’s most complex and controversial topics the Israeli-Palestianian conflict, who will be presenting Can We Talk About Israel? A Guide for the Curious, Confused and Conflicted.

There are many quests among the books featured this year: winner of the Canadian Jewish Literary Award for Fiction GARY BARWIN brings Nothing the Same, Everything Haunted: The Ballad of Motl the Cowboy, an eccentric and deeply felt exploration of genocide, persecution, colonialism and masculinity; together with U.S. author JAI CHAKRABARTI whose A Play for the End of the World, takes his protagonist’s quest all the way to India in a reminder of the power of the past to shape the present.

Short stories will be celebrated in an event with Vancouver’s RACHEL ROSE and her collection The Octopus Has Three Hearts, longlisted for the Scotiabank Giller Prize, together with Montreal’s AMI SANDS BRODOFF presenting her intricately linked stories in The Sleep of Apples.

From Toronto, novelist and cultural critic HAL NIEDZVIECKI will discuss his latest novel The Lost Expert, situated at the intersection between pop culture, media and individuality.

Fascinating stories of artists caught in the treacherous web of WWII will be presented by two U.S. writers sharing a historical fiction subject: bestselling author MEG WAITE CLAYTON with The Postmistress of Paris and painter/writer MICHAELA CARTER with Leonora in the Morning Light.

History continues to have a very important place with LEAH GARRETT who will present X-Troop: The Secret Jewish Commandos of World War II, (a real historical inspiration for Tarantino’s Inglorious Basterds!) and MENACHEM KAISER, winner of the Canadian Jewish Literary Award for Non-Fiction with his gripping story of retrieving a lost treasure in Plunder: A Memoir of Family Property and Nazi Treasure.