Governor General Award-winning poet Patrick Lane (born in Nelson in 1939) returns to fiction with Deep River Night, a novel that reviewer Dustin Cole — in an email to The Ormsby Review — describes as “a patient lament … the product of sustained and profound thought.”

All 416 pages of Deep River Night take place over 48 tense hours in a remote sawmill community on the North Thompson River between Kamloops and Jasper. “The setting is industrial pastoral,” notes Cole. “River, flora and fauna, the folk, the sawmill and the railway, mesh and grind together as one grand symbiotic biomechanism.”  –Ed. 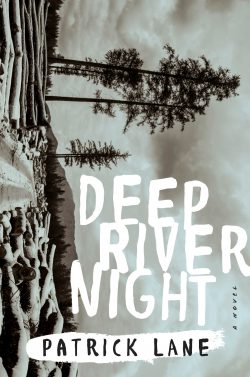 For those unaware of poet Patrick Lane’s literary achievement, one has only to open his new book Deep River Night to the verso of the first leaf, which lists titles of all his published works, the column nearly as long as my forearm. A publication record of this size raised my expectations for the novel. They were not dashed. Therein I encountered a world rich in physical detail and moral complexity. I was often entranced by a hypnotic prose style that plunges and soars and probes.

Interior British Columbia in the year 1960. An unnamed sawmill village along the North Thompson River is inhabited by a wide range of characters, primarily mill workers and farmers, their lives explored with varying degrees of depth and detail. It is a tragedy almost biblical in its intent: inexplicable, inevitable, damning. It is also a masterwork of psychological realism.

Art Kenning, the mill’s first-aid attendant, traverses the village and canyon landscape in an alcohol- and opium-induced fugue state, his eyes “like two pissholes in a snowbank,” “like something dead had been dragged through them,” tormented as he is by constant flashbacks of the Second World War. Wang Po, the Chinese camp cook, is Art’s confidant. He is a survivor of the massacres at Nanjing and has come to Canada as a refugee. They smoke opium together and talk about “their wars,” Kenning’s in Paris, Caen and the Scheldt peninsula, Po’s in Nanjing and Shanghai.

Art and Wang Po’s teenage friend, Joel Crozier, voyeur, spends his time wandering the village and mountainside looking into people’s windows while not at the mill working his clean-up shift, or having outdoor sex with Myrna Turfoot, a farmer’s eldest daughter. 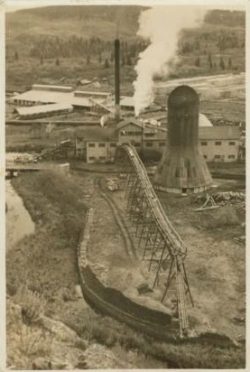 There is the fourteen year-old Tooley girl, Alice, abducted by a nun at the age of four and recently sold for fifty dollars to the village store owners, Imma and Piet Rotmensen. They lock her in a lean-to and force her to work at their store with the promise of freedom when she turns sixteen.

Jim McAllister is the mill’s top sawyer. Despite cold behaviour and suspicious activities that transpire between him and his wife, Jim is protected by the sawmill boss, Claude Harper. Claude is single-minded and ruthless, identifying with one function only, mill production. He was also a major in Art Kenning’s tank corps in the war. Indeed, Art and Claude share a common past reaching back to the Depression-era of Downtown Eastside Vancouver.

These and many more characters populate this remote community located between Jasper and Kamloops, where the main event is a weekly dance Saturday night. There is no electrical grid, no police department, no hospital.

The setting is industrial pastoral. River, flora and fauna, the folk, the sawmill and the railway, mesh and grind together as one grand symbiotic biomechanism. While reading, I imagined the author, a little god, holding the manifold dimensions of his project together, at once sharply delineated and entirely porous, howling factory, beating heart.

As the sawmill winds down for the week on Saturday afternoon, Claude Harper resents the coming respite, regardless of its brevity:

And he missed the whistles, the story of the mill. Familiar as breathing, they spoke through the shifts: one whistle to start up or shut down, two whistles for the millwright, three for the foreman, four for Claude himself, and five for the first-aid man. The whistles called their needs through the days and nights of week, their shrieks coiling up and down the valley, the wailing echoes sounding along the river and mountains, moose, lynx, cougar, and bear no longer lifting their heads into the terrible outcries they endured, the beast they heard crying out in pain, the animal that never died.

Claude longed for the convulsive fury when the mill was working full-throttle, the way it consumed everything leaving nothing behind but loaded boxcars, smoke, and ash. It wasn’t just the logs and the saws that tore them into lumber. It was the men on the mill floor. He loved the waste of his men’s bodies, their exhaustion when they walked off the floor. When the shift was over they passed below the window in clumps and clusters, no one talking, their lunch buckets hanging from their hands.

This recombinant passage makes of the sawmill a ravenous Moloch with its own skirling semiotics the landscape and animals can only endure, as those hired to control it are synchronized by the whistle language, driven to exhaustion, silenced. By the end of each shift the only things human left about them are the lunch buckets dangling from their tired hands. Claude is exposed as a megalomaniacal Führer. For him, the mill’s cacophony “was the sound of money crying.”

And still there is so much humanity in the village. 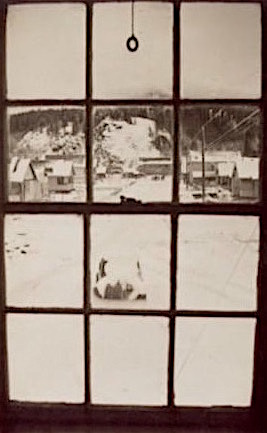 View from teacherage at Giscome, circa 1950. Northern B.C. Archives

The multidimensionality of the novel mentioned above is achieved through characterization. Some of the characters have thoroughly developed pasts. In my estimation, then, memory is by far the most salient theme in Deep River Night. It is how Lane animates the people in his story, and more generally, it is the stuff of which, a posteriori, we all belong, a present made up of the past, individually and collectively, subjectively and historically. Through Lane’s expert prose, plain, yet learned, yet lyrical, I was reminded that memory is not a conceptual monolith. It is comprised of the short-term and the long-term, the cogent, fractured, and hallucinatory.

Art Kenning is tortured by the regret of standing by while a fellow combatant leads a ten year-old Dutch girl into her parents’ barn to be gang raped. It is his previous inaction and toxic obsession with this regret that motivates his behaviour. When he is faced with a new opportunity to act with fortitude he struggles to meet the demands of this opportunity.

Like the river flowing below the village, its onward surge interrupted by eddies and whirlpools, Art’s immediate experience is constantly disrupted by memories of a brutal past: the murder of his mother by his father when he was fifteen, a doomed love affair with the detached Parisian woman, Marie, and his concussion from a shelling in what appeared to him a tranquil vegetable garden. A glance at the mill’s beehive burner transports him instantly back to the war, to an image of flamethrowers arching over the Leopold Canal in Moerbrugge.

Throughout the book, Art cohabits places remote in time and space, straddling a tormented limbo his alcohol and drug abuse exacerbates.

While Claude is a recurrent figure in Art’s memories, in Art’s regrets, Claude doesn’t think about the past at all, let alone Art. He is devoid of reflection, concerned only with maximizing mill profits and his near future, a year or two down the road, on the coast with his wife and kids, the mill run into the ground and the machinery torched to collect insurance, cut blocks pillaged for marketable fir, the old cedar left in splinters, “nothing left but a few scattered pecker poles hanging over the carnage of stumps and limbs and crushed trees.”

Wang Po’s past is as brutal as Art’s. Victim and witness of the Rape of Nanjing, he watched his parents and countless others murdered by the Japanese, his city torched. Unlike Art he is a Buddhist and has managed to accept his past. While his memories are saddening, he is not attached to the pain they caused him, having “let go of the old years the same way the river let go of the mist that rose from winter waters only to vanish in the air.” 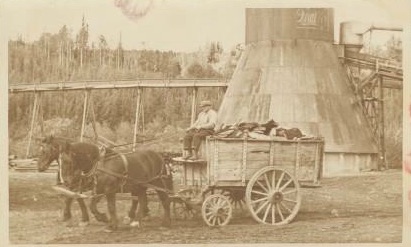 Joel Crozier is much younger than Wang and Art but he has “grown up a lot since his father had tried to burn God into his head.” His memories are much closer to him in time than those of his older friends. He is lucky, his sense of right and wrong having been instilled in him not through family guidance, but by the good will of strangers. Freezing to death on a freight train, an old man stuffs newspapers in his clothes and huddles with him to fend off the cold. When the train reaches the village, of the four men in the freight car, Joel is the only one allowed out by Claude. At the cookhouse, Wang Po feeds him hot soup and a bacon and sausage sandwich as he huddles by the wood stove, the feeling slowly restored to his thawing body.

Joel also experiences his first dilemma. He finds himself in love with two women at once. “That was when Alice and Myrna became confusions in his life.” Patrick Lane’s evocation of this newfound conflict is perhaps my favourite sentence in the book. That moment of a shattered simplicity of mind is in turn described with plaintive simplicity and becomes an elegy for childhood itself.

Alice has no memory of her real family. She remembers a pair of white hands snatching her off the buckboard wagon at the Williams Lake Stampede. Hers is perhaps the most affecting pain in the story because it has no contrast. It is a closed system of sexual, physical, and mental abuse characteristic of the residential school system, followed by her confinement and serfdom at the hands of Piet and Imma Rotmensen. She is so despairing that she can’t even recognize hope when it’s staring her in the face. Cliff Crowchild Waters, a Métis mill hand with Tooley blood like Alice, offers to be her liberator. Even though she trusts him she cannot conceive of freedom, being confined under threats of violence for so long now. 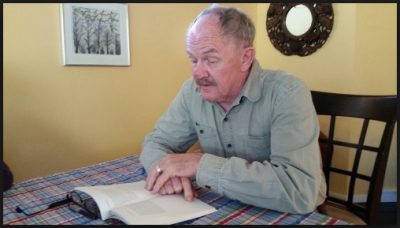 The industrial pastoral — apparently a contradiction in terms. Patrick Lane’s book suggests otherwise. It evokes the temporal and by extension remembrance. The river always the same, always different. A child is conceived, a baby is sick, her mother abandoned by the father, in the wrong town for health care and too poor to get it anyway. “The only thing that never stopped was the great fire, the smoke boiling from the beehive cone drifting south into the canyon along the river, a grey swath eating into the forest along the river’s hard banks.”

But we know the village is speeding toward its terminus; as resources are depleted so too will it, it will lose its train station, its stories, it will fade from the atlas, only ever a pencilled-in dot, a temporary utilitarian edifice that doesn’t need a name. Stark and bleak, I read the book and didn’t laugh once, no matter how tender and jocular it sometimes was. It seemed to me no laughing matter.

At bottom, Deep River Night is a mystery, a mystery solved by the land. Like all good mysteries it is one long foreshadowing. 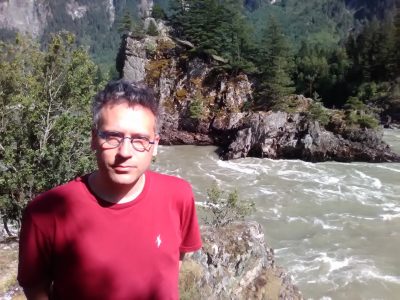 Dustin Cole was born in Hinton, near Jasper, and raised in the town of High Level, a remote community in northwestern Alberta, and received his B.A. in history from Simon Fraser University. He has authored the collection of oneiric poetry Dream Peripheries (Vancouver: General Delivery, 2015), and is writing a novel, Notice, set in contemporary Vancouver, concerning a student served with a Notice of Eviction by his shady landlords, his subsequent insolvency, and his realization that Vancouver is far from a romanticized “Super Natural” idyll full of promise and contentment. Dustin Cole lives in Slave Lake, Alberta. 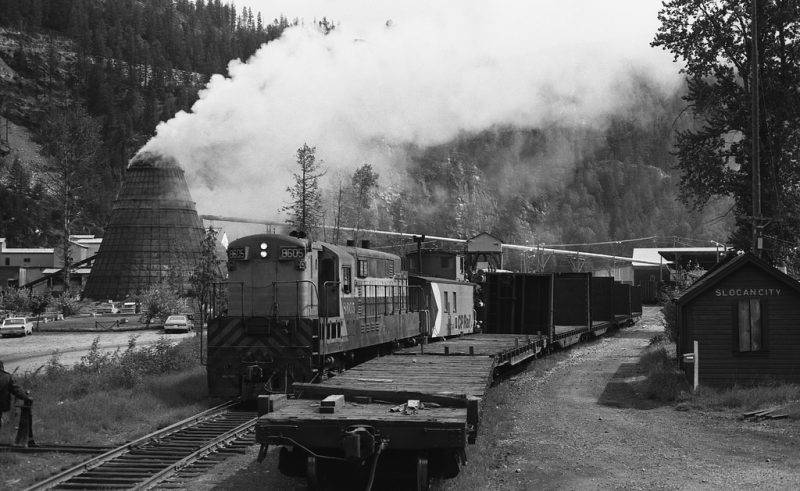 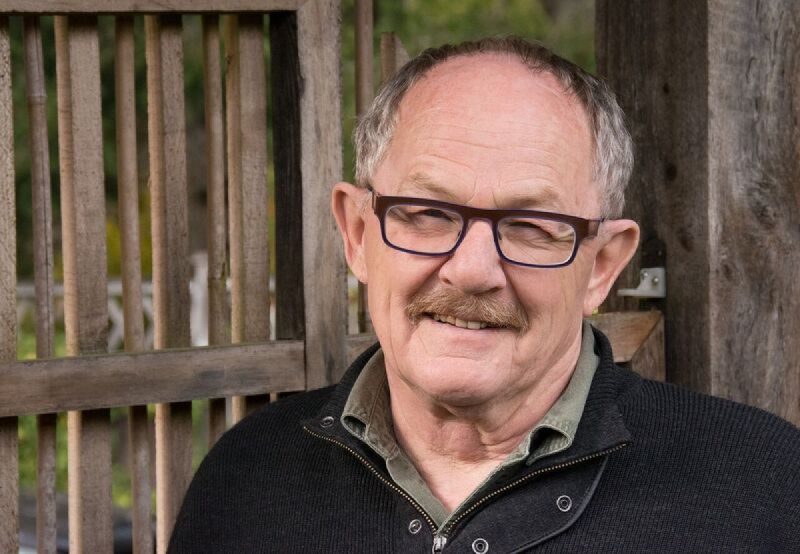