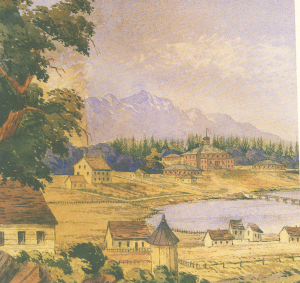 Throughout the 1860s, Frederick Whymper sketched his way From California to British Columbia, onto the Yukon, Alaska and Siberia. He was the first to sketch the Fraser Valley route to the Cariboo goldfields from New Westminster, the first European artist to paddle most of the Yukon River and he accompanied crews as they laid overland cable from New Westminster to Petropavlovsk. Much of his artwork first appeared newspapers, journals and scientific reports. With a foreword by Robert Amos, Peter Johnson’s A Not-So-Savage Land: The Life and Times of Frederick Whymper, 1838-1901 (Heritage $29.95) focuses on his travels and artwork in B.C. and Alaska five years before the advent of photography.

Born in London, England in 1838, Frederick Whymper was the official artist with Robert Brown’s Vancouver Island Exploring Expedition and he also visited Bute Inlet with Alfred Waddington’s road builders prior to the so-called Chilcotin War. He stayed in B.C. from 1862 to 1867, visiting the Cariboo goldfields and partaking in the construction of the Collins Overland Telegraph. He returned to England where he produced a memoir that was first published in 1868. His first five chapters deal primarily with his journeys in British Columbia. He later produced an historical work on Arctic explorers in North America. He died in London on November 26, 1901.

FEATURED IMAGE: Victoria by Whymper in 1863.

Travel and Adventure in the Territory of Alaska, Formerly Russian America – Now Ceded to the United States – And In Various Other Parts of the North Pacific (London: John Murray, 1868; also Ann Arbor: University Microfilms, Inc., 1966)

The Heroes and the Arctic and Their Adventures (London: Society for Promoting Christian Knowledge; New York: Pott, Young & Co., 1875)