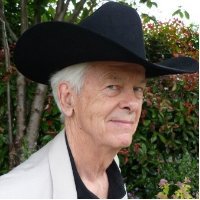 At age 80, Bruce Fraser will be touring in the Spring of 2018 to promote his third novel in Kamloops, the Okanagan, Vancouver Island and Bellingham.

Meanwhile he has been interviewed by CBC’s Radio West in Kelowna:

Vancouver lawyer Bruce F. Fraser QC owns a ranch at Lac La Hache in the Cariboo, giving rise to his trilogy set in the Chilcotin.

After practicing law for 45 years in the courtrooms of B.C. and the Supreme Court of Canada, often representing Native clients, and ranching in the Cariboo-Chilcotin, Fraser first used his experiences to write On Potato Mountain (Granville Publishing 2010), a murder mystery.

Fraser again followed the path of his artist-shaman protagonist Noah Hanlon across the Cariboo-Chilcotin for a follow-up novel called The Jade Frog (Granville Publishing 2015) during which Hanlon helps track down a murderer in the 1980s. This story also describes how the Chilcotin Nation were determined to preserve their ancestral homeland. The struggle culminates in a historic court case (Roger William vs Her Majesty The Queen in Right of the Province of British Columbia). In June of 2014, the Supreme Court of Canada affirmed the right of the Chilcotin people to a significant part of their land.

For his third novel, Noah’s Raven: A Chilcotin Saga (Three Ocean Press 2017), Fraser has imagined the rise of a Trump-like billionaire and presidential hopeful named Billy Joe Northrop who, with the help of his  political strategist Bull O’Connor, hopes to take over White House through deceit and backroom deals.

While dating Northrop’s daughter Harriet, an Atlanta reporter named Fred Scully stumbles upon a potentially damaging story concerning Northrop that puts his live in danger as a journalist. On the run, Scully connects with Chilcotin elder Noah Hanlon who is trying to preserve ancestral homelands. In this political thriller, the opportunistic Americans threaten to conquer the pristine wilderness of the Chilcotin with a development that will irrevocably scar the land.

Fraser’s story “The Partner” won The Advocate short story contest in 2009 and his article on Dugald Christie was published in the November 2007 edition of The UBC Law Review. Fraser is also the founding President of Access Pro Bono.