Anything was possible in Joan’s world

Joan Betty Stuchner's ten books are suffused with an optimism that the world can be a better place. She was just hitting her stride when she succumbed to pancreatic cancer. 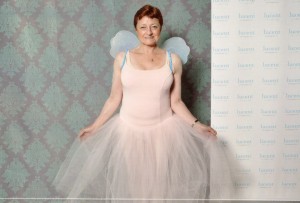 Joan Betty Stuchner dressed as one of her characters, Sadie the Ballerina, for a child's fundraiser.

“I know that many writers tell you to imagine you are writing for a specific child, but I always want to write for both myself and everyone else, regardless of age.” — Joan Betty Stuchner