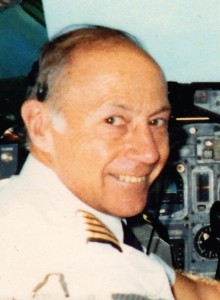 Robert “Bob” Gartshore was born in Calgary in 1931, earned his pilot’s licence in 1949 and joined the Royal Canadian Air Force the following year when the Korean Conflict broke out. Six years later he switched to civilian aviation, first as a flying school instructor, then as a pilot for Canadian Pacific, Wardair and Canadian Airlines. Following his retirement, Bob and his wife Joy continued living in Victoria, BC, close to their five children, five grandchildren and two great-grandchildren.

The memoir A Life of Flight: One Pilot’s Story from Piper Cubs to 747s and Beyond (Agio Publishing 2016) recalls Gartshore’s 44-year flying career from fabric-covered Piper Cubs to Boeing 747s. Captain Gartshore logged over 21,000 hours flying to six continents for the RCAF and three airlines. He was Wardair’s first international pilot, and an instructor on numerous aircraft, Link Trainers and simulators. He has flown Mecca-bound pilgrims kindling fires in the aisle to cook their meal. He barely escaped crashing in the Arctic. He describes his proximity to a UFO and balls of St. Elmo’s Fire’