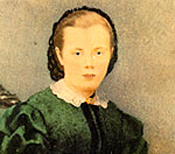 One of the few pioneering accounts by a woman in British Columbia during the mid-19th century was written by Susan Allison who lived on the west side of Okanagan Lake, 30 miles north of Penticton, at “Sunnyside,” and also at Princeton, B.C. with her rancher husband John Fall Allison, who located Allison Pass, now part of the Hope-Princeton Highway. She gave birth to 14 children, all of whom survived into adulthood, and she befriended many local aboriginal women, who, she wrote, “told me more than they told most white people.”

George Woodcock once favourably described her memoir as the far western equivalent of Roughing It in the Bush, “though Susan Allison had greater qualities of philosophic endurance than Susanna Moodie and also a greater empathy not only with the wild land but also with the strange and sometimes alarming people she encountered.” John Allison was born in Leeds, England in 1849, the son of a surgeon. He came to the U.S. with his parents in 1837 and he participated in the California gold rush as a boy in 1949. He came to B.C. in 1858 with the gold rush. Governor Douglas urged Allison to prospect for gold in the Similkameen and Tulameen areas in 1860. In September of the same year Allison and others pre-empted land which later became the townsite of Princeton, but they failed to complete their titles. Allison staked gold, copper and coal claims and established the first cattle ranch. His first wife was Nora Yakumtikum, a First Nations woman who bore four children and also ran a pack train for the Hudson’s Bay Company. Allison later accumulated more land for farming and ranching, marrying Susan Louisa Moir in 1868. Their house at Allison Flats, east of Princeton, was the first “white” house in the Similkameen valley.

Susan Allison was born as Susan Louisa Moir in Ceylon (now Sri Lanka) in 1845 where her father owned a tea plantation. Upon her father’s premature death, she and two other children accompanied their mother to England where her mother remarried to a Scotsman, who somewhat foolishly brought them to Fort Hope on the Fraser River when Susan was 14.

George Woodcock, in a review for B.C. BookWorld, further described her early days in B.C. “As Susan Moir, Susan Allison arrived at Fort Hope on the Fraser River with her mother and her spendthrift stepfather, Thomas Glennie, who was attracted by the thought of becoming a country squire in the rich land of the goldfields. Fortune did not flow as easily as Glennie had expected, and in 1864 he vanished, leaving his wife and children to make do as best they could with the help of genteel acquaintances in Victoria and the Fraser Valley.”

It’s not known if Susan Moir knew John Allison already had a First Nations wife and three children when she married him; but given her straightened circumstances, perhaps that was less important to her than escaping from poverty. From 1873 to 1881 they lived on the west bank of Okanagan Lake, where she gave birth to the first “white” children born in the area, until their ranch lost 1000 head of cattle in the winter of 1880-81. During this period their settlement was named Sunnyside, a name that disappeared after their departure. It resurfaced in a 1931 newspaper in The Province newspaper about Okanagan pioneers. Gradually the name resurfaced after the publication of Margaret Ormsby’s book about Susan Allison. The community to which the Allisons went after Sunnyside was originally called Vermilion Forks, named for the red, yellow and orange ochre that Indians used for face painting, but it was also widely known as Allison’s or Allison Flats. The name change to Princeton was made in 1860 in honour Prince Edward, the Prince of Wales, but he never visited the town.

When her husband died in 1897, Susan Allison tried running the family ranch, with some success. George Woodcock writes: “She was deeply interested in the Indian peoples of the region, and deeply concerned as she watched their decline during her decades in these valleys whose late nineteenth century remoteness is hard to envisage now that they are traversed by main highways. The fact that she was often involved in life at its most elemental — for fire and flood several times left her homeless in a virtual wilderness — did not diminish Susan Allison’s interest in the artistic accomplishments she had learnt in her girlhood, and after [her husband] Allison died in 1897 she began to turn to writing, publishing a long poem on the Similkameen Indians and also a paper on them which was published by the British Association for the Advancement of Science. But most of her work went into the Recollections… They are the only major account by a woman of pioneering life in British Columbia during the mid-nineteenth century.” THE LAKE / N-HA-A-ITK, an opera by Barbara Pentland and Dorothy Livesay about Susan Allison, had its world premiere in 2014, starring Heather-Pawsey and Delphine Derickson. Darren Hull photo.

Susan Allison’s recollections were published under the title of A Pioneer Gentlewoman in British Columbia: The Recollections of Susan Allison (UBC Press, 1976), edited by Margaret Ormsby.

Later, Diane Sterne published a collection of selected works by Susan Louisa Allison (née Moir), dubbed Mother of the Similkameen, called In Her Words. Sterne’s book was prepared in celebration of Princeton, B.C.’s 150th birthday. Her poetry and stories (some of which were written under the pen name of Stratton Moir) recount Indian legends told to her in the 1800’s when she ventured into the British Columbia interior with her new husband, John Fall Allison. With the assistance of members of her family and the Princeton Museum, this collection of lost writings has been preserved. Included are: “In-Cow-Mas-Ket” and “Quin-Is-Coe”.

Sixty years after its radio debut, a “true-life Canadian opera’ inspired by Susan Allison’s life, THE LAKE / N-HA-A-ITK, by Barbara Pentland and Dorothy Livesay, was accorded its world premiere on stage in 2014 by Astrolabe Musik Theatre and Turning Point Ensemble in collaboration with Westbank First Nation. Soprano Heather Pawsey sang the role of Susan Allison for three performances on the site of the Allisons’ original 1873 Sunnyside ranch, West Kelowna’s Quails’ Gate Winery.