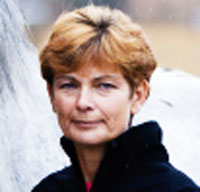 For 15 days in 1998, the Silver Creek Forest Fire caused havoc over a 60 square kilometre area, resulting in the evacuation of 7,500 residents from Salmon Arm. The Silver Creek area was again threatened by a major fire in 2003. “As the librarian of this tiny community,” Julie White told the Salmon Arm Observer, “I heard many tales of acts of bravery, big and little, during these two disasters.” Her novel Riding Through Fire is directly inspired by the stories of “everyday heroes” she heard at the Silver Creek Library. Julie White with Keno. In 2015, she wrote, “We took a gamble and bought him at our local livestock auction. Except for a thereabouts age of seven, nothing was known of his history. He’s now 25 and pretty much retired to pasture after a long and useful career that spanned the horse show ring to the racetrack where he ponied our racehorses to the starting gate.”

From afar, it might look like a horse race, of sorts. Nikki Tate of Saanich set the pace. Between 1997 and 2002, she published seven novels in her Stablemates series, aimed at teenage girls who want to read about girls and horses.

Equestrian-minded Julie White of Armstrong has been catching up fast. In 2015, she released her fourth girl-meets-horse novel for slightly younger readers, aged 8-12.

But it’s not really much of a competition. Tate is a huge fan. “When it comes to writing about horses—and horse racing,” Tate wrote, “Julie White is the real deal.” She praised White’s Under the Wire as a compelling coming-of-age story “with a delicious equine focus. Fabulous!”

Under the Wire mirrors the experiences of her husband, Rob, who decided from a young age that he wanted to be involved in thoroughbred horse racing. Her follow-up Riding through Fire was directly inspired by the evacuation of animals in the Silver Creek fires in 1998 and 2003.

White continued her Hillcroft Farm series with her fifth novel, The Lost Diary (Sono Nis $9.95), an audacious leap back in time to 1955.

Mary and her brother accompany Colleen to the CNE in Toronto where there’s an exciting finale. But it’s White’s surprise melding of Faye’s contemporary story with the life of Mary Inglis that makes The Lost Diary particularly satisfying and memorable.
A heroine who rides bareback is not far removed from Julie White’s own story. She got her first horse, Roger, a chestnut with four white socks, at age twelve when she moved to the Vernon area with her parents. “It was a dream come true,” she told the Vernon Morning Star. “We lived in Coldstream and I got to know other kids who had horses and learned to ride.

White’s fond memories of the Vernon and District Riding Club have served as grist for Mary Inglis’ story. For many years White enjoyed working at the local Silver Creek Library, where some of the patrons arrive on horseback, switching to a job at the Armstrong Library in 2015.