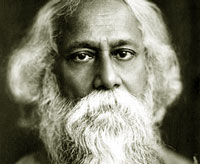 Awarded the Nobel Prize for Literature in 1913, the Bengali poet Sir Rabindranath Tagore (1861-1941) was knighted in 1915, but resigned the honour in 1919 to protest repressive British measures in India. He made four visits to North America, including one visit to Canada when he was photographed by Vancouver photographer John Vanderpant in April of 1929 [as shown]. En route to California, Tagore was visiting B.C. as the keynote speaker for a conference of the National Council of Education, stopping only in Victoria and Vancouver. He spoke four times in Vancouver and once in Victoria.

Nearly aged seventy, Tagore had to cancel a proposed visit to the Victoria gurdwara for its Baisakhi Day but was entertained by a evening of sacred music at the Vancouver gurdwara. Revered as a writer and as a spokesperson for Indian independence, Tagore was joined by his English translator and editor Charles Freer Andrews, a missionary who was a close associate of Mahatma Gandhi.

“Do your best to prove yourselves ‘Good Canadians,” Tagore advised. As the bilingual guide for these two esteemed literary visitors, Kartar Singh of Toronto, a Theosophist, decided to remain in British Columbia where he befriended the thriving sawmill operator Kapoor Singh Siddoo and began to publish a bilingual English and Punjabi newspaper called India and Canada: A Journal of Interpretation and Information, producing seven monthly issues in 1929 and 1930. Bust of Rabindranath Tagore at University of B.C.

During Tagore’s final visit to North American in 1940, the Hindu mystic and educator was detained at the border by U.S. officials and cross-examined about the purpose of his visit. He telegraphed President Roosevelt but never received a reply. He cut short his visit and returned to India.

Among his many noteworthy books is The Religion of Man.