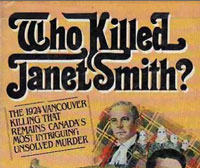 The most famous unsolved murder in B.C. history is the subject of Who Killed Janet Smith? (1984) by Ed Starkins. This pleasingly thorough investigation and summary of the bizarre events surrounding the suspicious death of a twenty-two-year-old Scottish nursemaid in 1924 has long been the basis for both speculation and further research. Starkins’ original 1984 volume was reprinted to mark Vancouver’s 125th anniversary.

In his foreword to Starkins’ 2011 reprint, historian Daniel Francis concludes, “A city cannot be consequential if it is not self-conscious; that is, aware of its history and identity. To become self-conscious it does not need bread and circuses (or even Olympic Games); it needs a literature, a body of work in which the city thinks about itself and expresses what it finds. This is what a book like Who Killed Janet Smith? does and why it is so gratifying to welcome it back into print.” At around noon on Sunday, July 26, 1924 the body of Scottish housemaid Janet Smith was discovered in the basement of a Shaughnessy Heights mansion at 3851 Osler, where she lived and worked as a nursemaid.

At first the Point Grey municipal police were willing to accept circumstantial evidence that suggested Smith might have shot herself in the laundry room with the .45-calibre revolver that belonged to her employer, F.L. Baker, an exporter of pharmaceutical drugs. The body was discovered by a Chinese ‘houseboy’ named Wong Foon Sing who had been alone in the house with the 22-year-old Smith at the time. Wong Foon Sing called his employer who, in turn, called the police after he had come rushing home to see the body first. To this day rumours persist that Smith was taken to Osler Street from nearby Hycroft mansion after a party, sometimes referred to as an orgy, that was held on Saturday night. The connections to Hycroft were also familial. Hycroft was built by the powerful merchant Alexander Duncan McRae and the Osler residence was owned by his daughter. She was married to Richard Baker, ne’er-do-well brother to Frederick Baker, the drug merchant. A coroner’s inquest raised medical suspicions that Smith had been murdered but propriety demanded that Smith had either killed herself or shot herself accidentally. Rumours persisted that Smith might have been killed or even raped. A judicial cover-up was suspected. Several nursemaids disputed the results of the inquest by suggesting Smith had no reason to take her own life. A follow-up inquest decided Smith had indeed been murdered. Vigilantes dressed in Ku Klux Klan attire kidnapped Wong Foon Sing on March 20, 1925 from the Baker home and beat him for six weeks, threatening to kill him, hoping he would confess to the murder or provide new evidence. Clearly the interrogators were operating in collusion with the British Columbia Provincial Police because on May 1, 1925, after Wong Foon Sing was found wandering deliriously along Marine Drive, he was charged with Janet Smith’s murder.

Politics, racism and social prestige had much to do with the prosecution of Wong Foon Sing. As has been made clear by Ian Macdonald and Betty O’Keefe’s Canadian Holy War: A Story of Class, Tongs, Murder and Bigotry (Heritage $17.95), the tensions between the Scottish aristocracy in Vancouver and the Chinese population were becoming hazardous in the 1920s. Attorney General A.M. Manson confided to a newspaper reporter that he knew that the houseboy was innocent. The trial was allegedly held to expose more evidence. This bogus claim led to charges being laid on June 17 against Point Grey reeve J.A. Paton, his police chief, four policemen and three private detectives for kidnapping the houseboy. They promptly admitted that it was the Attorney General who was behind the kidnapping in the first place. Manson had to deny these accusations in the B.C. Legislature. The volatile Janet Smith case proved ruinous to his aspirations to become premier of British Columbia. The Reeve and his police staff were somehow acquitted but the private detectives on the city payroll took the fall, saddled with prison terms for mistreating the houseboy. Wong Foon Sing eventually returned to his family in China.

The Janet Smith case continues to intrigue historians and would-be filmmakers alike. New revelations from Scotland Yard files, released in the late 1990s, have connected Frank Baker to illegal drug smuggling. As a war hero, Baker was not subjected to intense interrogation or scrutiny at the time of his nursemaid’s death.

Coincidentally Janet Smith is also the name of a murder mystery writer in Seattle, Washington.

A long-time enthusiast of B.C. history, Starkins is a graduate of San Diego State University and a former editor of the Vancouver Review.

Review of the author’s work by BC Studies:
Who Killed Janet Smith?