Native-newcomer relations must be reconciled. 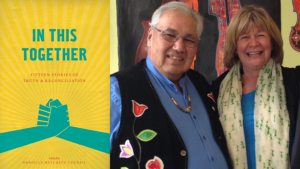 Decolonization in Canada gives rise to In This Together, published from Victoria.

REVIEW: In This Together: Fifteen Stories of Truth & Reconciliation

When asked in September 2016 how he thought the final report of the Truth and Reconciliation Commission (TRC) was being received, former National Chief of the Assembly of First Nations Phil Fontaine replied, “I see movement, positive developments.”

Among those encouraging developments, he continued, was the young Trudeau government’s commitment to implement all ninety-four of the Commission’s Calls to Action, or recommendations. Other positive responses included action by most of the provincial and territorial governments to modify their school curricula to reflect more accurately the history of Native-newcomer relations in Canada, all the better to foster reconciliation.

Many ordinary Canadians have also been inspired by the TRC to take up the cause of reconciliation. Among those so moved was an Edmonton-based historian, writer, and speaker, Danielle Metcalfe-Chenail, who organized a group of people to begin the work of reconciliation in their own words by creating a collection of personal essays that became In This Together: Fifteen Stories of Truth & Reconciliation.

The twelve women and three men’s thoughts have been supplemented by the record of an interview by broadcaster Shelagh Rogers with the former Chief Commissioner of the TRC, Justice (now Senator) Murray Sinclair, in which they reflect on their experiences (Rogers was an Honorary Witness with the TRC) to express how they feel about the state of Indigenous-immigrant relations, as well as what they think should be done about their troubled state. Justice Murray Sinclair was chair of the Truth and Reconciliation Commission, which held public hearings, and gathered documents, on how Canada sent thousands of aboriginal children to residential schools for many decades. (Wayne Cuddington)

Most of the other contributors to In This Together, like Danielle Metcalfe-Chenail herself, blend their own life experiences with an awareness of the harsh realities that mar Native-newcomer relations in this country. Sometimes the dawning of awareness leads authors to emotional outbursts. Several of them, in effect, say that they have only recently learned of the grave wrongs that have been inflicted on Indigenous peoples by means of residential schooling and other policies, and they are going to share their outrage about schooling and other issues with the reader.

Many of the pieces are autobiographical and leave a reader with the impression that they are partly or mostly about the author, an impact that does not do much to advance the cause of reconciliation. The concluding essay by Dene visual artist Antoine Mountain is overtly and completely autobiographical. It is moving and has the ring of authenticity, but it does not even attempt to address reconciliation.

The conversation between Rogers and Sinclair, on the other hand, is focused on how reconciliation can be advanced and why it is important that it be. Sinclair, unlike most authors in the collection, points out that in residential schools there “was a pretty fair number of people… who were not physically or sexually abused” (190). Sinclair also explains that he and his fellow commissioners learned that survivors coped with residential schooling by means of a number of devices, notably including “laughter” (190). That statement rings true with any non-Native who has spent time with Indigenous people in Canada. Even in sombre situations their interactions are shot through with humour — unlike the essays in In This Together.

Those contributors seem to have parked their sense of humour, in sharp contrast to Senator Sinclair and Shelagh Rogers, both of whom frequently also employed light comments in their work with the Commission.

Murray Sinclair also provides sound guidance to Canadians who want to promote the cause of reconciliation when he urges Canadians to confront their history. “Coming to terms with that history [of Aboriginal non-Aboriginal relations] is important,” he contends. “Once we have come to terms with that history, and reconciled with it, then the relationship will be established” (202).

Sinclair and Rogers are, unlike a number of the other contributors to this collection, on topic and task-oriented. Venting about the past is not the same thing as coming to terms with a nation’s history.

In This Together is a well-crafted and often moving compilation of reflections from well-meaning, talented people. But it is far from being a road map to reconciliation. The Truth and Reconciliation Commission’s final report of 2016, like Shelagh Rogers’ interview with Murray Sinclair, provides far more guidance for readers in search of ways to assist in the cause of healing and reconciliation. J.R. (Jim) Miller, Professor Emeritus of History at the University of Saskatchewan, is a specialist in the history of Native-newcomer relations in Canada. He was the author of the first general history of relations between Indigenous peoples and immigrants in Canada, Skyscrapers Hide the Heavens: A History of Indian-White Relations in Canada (3rd ed. 2000); the first history of residential schools for Native children in Canada, Shingwauk’s Vision: A History of Native Residential Schools (1996); and the first historical overview of treaties between the Canadian crown and Aboriginal peoples, Compact, Contract, Covenant: Aboriginal Treaty-Making in Canada. (2009) Miller will publish Residential Schools and Reconciliation: Canada Confronts Its History with the University of Toronto Press in 2017. He is a Fellow of the Royal Society of Canada an Officer of the Order of Canada.