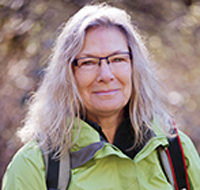 DIRECTIONS: The Tod Inlet Trail and the Tod Creek Trail start from Wallace Drive, near Benvenuto Avenue, opposite Quarry Lake. It’s about 20 minutes walk on either trail to Tod Inlet. Gwen Curry of Brentwood Bay has recorded the history and beauty of her nearest waterway in Tod Inlet: A Healing Place (Rocky Mountain Books $25). Even though it’s located only about half an hour from downtown Victoria, this tiny fjord known as a “hidden gem” has had a low provincial profile because it remains accessible only by boat or by walking. It was long home to the WSÁNE? (Saanich) people; then it became the twentieth century home to the Vancouver Portland Cement Company, the first cement production facility in Western Canada. Ontario filmmaker David Gray’s two films, Searching for the Sikhs of Tod Inlet and Beyond the Gardens’ Wall, recall the many Sikh and Chinese workers who lived and worked on the shores of Tod Inlet during the cement-production years. Long after the limestone quarries were depleted, development plans for this quiet inlet included hotels, golf courses and a marina. First Nations, local citizens, scientists and environmentalists fought against the development, and it was preserved as part of Gowlland Tod Provincial Park in 1995. Since then wildlife has made a comeback. The non-profit SeaChange Marine Conservation Society has set up a floating information booth at the site.

Through her prose and photographs, Curry pays tribute to its vibrancy and wildlife. From 1978 – 1994, Gwen Curry was a professor in the visual arts department at the University of Victoria. She has shown her environmentally-based artwork internationally and has been collected by public institutions and private collectors.

Curry took part in the Boreal Rendezvous, which drew attention to Canada’s northern environment, travelling the length of the Bonnet Plume River in northern Yukon. This ambitious project resulted in Rendezvous with the Wild: The Boreal Forest, (Boston Mills Press, 2004), edited by James Raffan; and Three Rivers: The Yukon’s Great Boreal Wilderness (Harbour Publishing, 2005). Curry’s artwork is included in both books as well as numerous art magazines and catalogues.