In Exhibiting Nation, Caitlin Gordon-Walker explores the ways in which Canadian multicultural nationalism has influenced exhibits at three of the country’s major museums.

Gordon-Walker suggests that multicultural nationalism adheres to a master narrative of Canadian history based on the primacy of the French and British founding settler societies while belatedly including minority cultural communities such as Indigenous peoples, South Asians, and Chinese.

Therefore an apparently inclusive nationalism has a sinister side, according to Gordon-Walker. Museum exhibits “illustrate the benevolent inclusivity of a mainstream national culture while at the same time affirming its dominance.” The project of multicultural nationalism subtly allows “ongoing practices of exclusion and violence within, at, and beyond Canada’s borders.”

Mike Starr of Parks Canada introduces a practical angle by showing how the field of Visitor Studies has been applied successfully in recent years at Fort Langley. –Ed.

The Exhibiting Nation book jacket promises a “journey” through the Royal BC Museum (RBCM), the Royal Alberta Museum (RAM), and the Royal Ontario Museum (ROM). It takes a while for the journey to begin, but perseverance through this rather dry volume pays off with some interesting insights and some good questions for reflection. Victoria, circa 1900, recreated at the Royal B.C. Museum 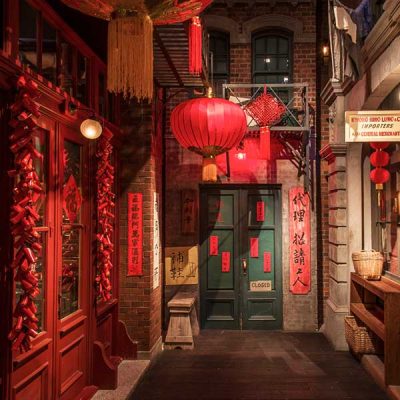 Victoria Chinatown in the 19th century. Exhibit at the Royal B.C. Museum

About multicultural nationalism, Gordon-Walker posits three implied “underlying tenets: first, that the multicultural state can achieve unity in its diversity; second, that it can ensure equal and adequate recognition of every individual and every culture within it; and third, that the national idea provides an adequate model for understanding cultural difference on a national and global scale” (p. 7).

I think the first tenet is self-evident – any nation wants unity, and as Gordon-Walker points out, many in Canada think that this unity can be achieved not in spite of its diversity, but because of it.

I don’t think Gordon-Walker has successfully demonstrated the existence of her claimed second tenet. Outside of a few hyperbolic statements on government or museum websites, no one claims that every individual and culture can be adequately recognized, a fact almost admitted to by the author (p. 27). Museums will always have to make choices limited by space, time, budget, etc., but ideally their visitors will see representations of pieces of their culture that are important to them. Gordon-Walker justifiably criticises the “national model” as an inadequate tool to understand cultures. The national labels we attach to people may tell us which nation’s passport they use, but the world is not “a mosaic of static, reified national cultures” (p. 143). Cultures, like people, are “changeable and fluid throughout histories that are multiple, contested, dense, and intertwined” (p.172).

In the case study section, the sixty-five pages or so of description and analysis of the three museum exhibits left me feeling unsatisfied. Each museum’s exhibits could have used sixty-five pages, and the author offers only two perspectives on the exhibits: her own, and that of the museum curators.

I wish she had presented a third perspective, that of visitors themselves. Gordon-Walker acknowledges that her interpretations “are particular readings. Visitors might … read the … exhibitions in numerous ways, often in a manner that the museum’s curators did not intend or envision” (pp. 171-2).

Without the perspective of visitors, we are left to wonder whether they are reading these exhibits in ways that reinforce what she calls the “disciplinary” function, the “dialogic” function, or neither. Gordon-Walker refers to herself as an “interdisciplinary scholar,” and draws insights from various disciplines in this work. It is surprising, therefore, that she did not use knowledge from the field of Visitor Studies to address this particular gap in her sources.

The dominant icon of a dominant culture? Arthur Heming, The Hunter’s Camp (1919) at the Royal Ontario Museum

Whatever the curators’ intent in designing the exhibit, and whatever the author’s expert assessment might be, what matters is how visitors read the exhibit.

For example, for almost fifteen years, Fort Langley National Historic Site has been hosting exhibits created by Kwantlen First Nation, in which members of the First Nation tell their stories. Museums have their goals for attempting to represent the various cultures of their constituencies, and one of them may be, as Gordon-Walker proposes, to promote the national project of multiculturalism, but what are the goals of the cultural groups who are being represented? Here is a question still waiting to be explored.