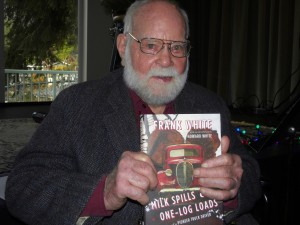 Frank White started writing the story of his life in 1972 when he was nearly sixty. It took him over four decades to finish his book and get it published. Along the way, his boisterous yarn in Raincoast Chronicles about wrangling tiny trucks overloaded with huge logs down steep mountains with no brakes won the Canadian Media Club award for Best Magazine Feature. It was reprinted so many times everyone urged him to write more. As a 100-year-old former truck driver, logger, gas station operator, “excavationist” (bulldozer operator extraordinaire) and waterworks technician, Frank White has now released the follow-up to his Milk Spills and One-Log Loads: Memories of a Pioneer Truck Driver (Harbour $32.95) that was published this spring when he was only 99. The second, 400-page volume of his memoirs is That Went By Fast (Harbour $32.95). He was accompanied to his book launch in Pender Harbour by his 97-years-young wife, Edith Iglauer, author of Fishing with John. Spills 978-1-55017-622-3; Fast 978-1-55017-668-1