‘Xsan marks the spot, in Terrace 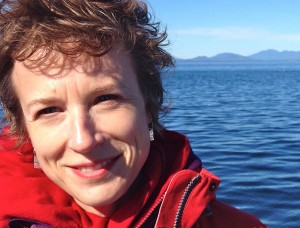 The public is invited to join Sarah de Leeuw and SkeenaWild Conservation Trust for a reading and celebration of  her new book, Skeena, at the Heritage Park Museum in Terrace.

First written about extensively in Hubert Evans’ classic novel Mist on the River (1954), the Skeena River is known to the Tsimshian as ‘Xsan, meaning the “waters that flow from the clouds.” Praised as a North Country epic, and as a poem/assemblage of intelligence and care that “cracks open geology,” and as a “poly-vocal watershed of poetry,” Sarah de Leeuw’s Skeena (Caitlin $18) is a single narrative elegy and celebration for and about B.C.’s second-longest river. Hyped by Wade Davis in advance, Skeena is also noteworthy because Sarah de Leeuw and partner Briar Craig hand-screen printed each dust jacket. Sarah de Leeuw has won the 2013 Dorothy Livesay Award for poetry; she has been a two-time recipient of a CBC Literary Award for creative non-fiction; and she won a Western Magazine Gold Award for the best article published in 2014 in British Columbia.