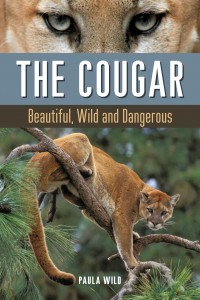 Paula Wild’s The Cougar: Beautiful, Wild and Dangerous (Douglas & McIntyre, 2013) explores the evolving relationship humans have with the largest cat in Canada and why cougars are such a valuable and important part of the environment. It has been named the 2013 Gold Winner in the Non Fiction – Nature category at the Foreword Reviews’ IndieFab Book of the Year Awards.

[The awards were announced at the American Library Association Annual Conference in Las Vegas in June, 2014. Foreword Reviews’ IndieFab Book of the Year Awards celebrate new indie books from authors and publishers whose work stands out from the crowd. The 2013 Silver Winner in the category of Non Fiction-Nature was Nature’s Paradise: Costa Rica by Douglas Goodell and Marco T. Saborío (Nature Arts Press); the Bronze Winner was Conversations with Barry Lopez: Walking the Path of Imagination by William E. Tydeman (University of Oklahoma Press). For more information on the awards, visit indiefab.forewordreviews.com.]

Although Paula Wild has always been interested in cougars she never thought about the predators much until attacks against humans spiked in the 1990s. When she heard a cougar scream in the green space behind her home, Wild knew she had to write about the mysterious and elusive creatures. Paula Wild was born in Spokane, Washington, grew up in Oregon and California. She immigrated to British Columbia in 1971 at age 19 and lived in numerous small communities before settling in Sointula on Malcolm Island. Sointula, which means “harmony” in Finnish, was founded as a utopian commune in 1901 by a group of socialist Finns. Fascinated by the stories the descendants of the original Finns told her, Wild decided they should be written down.

Her first book, Sointula Island Utopia (Harbour Publishing, 1995) received the BC Historical Federation’s Certificate of Merit with the judges noting the book’s “significant contribution to the history of BC.” Sointula is the story of the Finnish immigrants and their charismatic leader, Matti Kurikka. Despite initial hardships and rumours about free love, Sointula became known for its resilient Finnish community comprised of hardy commercial fishermen and loggers dedicated to the labour movement. While working on the book Wild recorded a series of aural history interviews for the BC Archives.

When Wild visited her partner, Rick James at an archaeology dig in the Bella Coola Valley, she was captivated by the stunning landscape, as well as the stories about the people who lived in this isolated region. Her second book, One River, Two Cultures: A History of the Bella Coola Valley (Harbour Publishing, 2004) focuses on the Nuxalk Nation, early Norwegians settlers who attempted to create a “morally perfect society” and a rough and ready mix of “outsiders” eager to embrace life in a remote wilderness.

Following One River, Two Cultures, Howard White, president and co-owner of Harbour Publishing, invited Wild to write the text for a coffee table book on the Comox Valley where she has lived since 1988. The Comox Valley: Courtenay, Comox, Cumberland & Area appeared in bookstores in 2006.  It won a B.C. Historical Federation Certificate of Merit. She has also written for numerous periodicals, including Beautiful British Columbia, Reader’s Digest and Canada’s History magazine. She lives in Courtenay, B.C.

Wild is a professional member of The Writers Union of Canada and has written for many periodicals including British Columbia Magazine and the Vancouver Sun. Her work has been nominated for National Magazine Awards and she received the John Alexander Media Award for “On a Mission for Life.” She lives in Courtenay, BC.

Review of the author’s work by BC Studies:
The Comox Valley: Courtnay, Comox, Cumberland, and Area
One River, Two Cultures: A History of the Bella Coola Valley