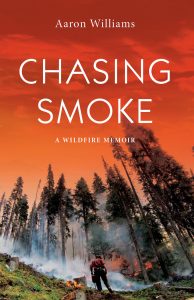 The threat of terrorism is over-rated. ‘First responders’ were everywhere in 2017 dealing with hurricanes, earthquakes and forest fires. Aaron Williams’ Chasing Smoke: A Wildfire Memoir (Harbour $22.95) describes the camaraderie and tactics required to survive 16-hour, high-adrenaline days in apocalyptic fiery landscapes. This book topped the BC Bestseller list for several weeks in 2017.

Born on January 5, 1986 in Terrace, Aaron Williams grew up in Prince Rupert and attended Memorial University of Newfoundland (2008-2012, English and Poli-Sci) and University of King’s College Halifax (2015-2017 MFA in non-fiction writing). He worked as a forest firefighter based out of Smithers from 2006-2014, which is the subject of his first book. – Ed.

This is a wonderful book, both for its timely subject matter and the young author’s remarkable narrative ability. It is rare to find a writer as articulate — or as heroic — as Aaron Williams, and the quality of writing in Chasing Smoke left me in no doubt of our good fortune.

Williams served as a fire ranger, mainly in British Columbia, during the summers between 2006 and 2014. Here he records his and his teammates’ front line experiences in the last of those years throughout the Chilcotin, an area notorious for devastating forest fires resulting from its placement on the central interior plateau where rainfall and snow are much less frequent than on the windward west side of the Coast Mountains. 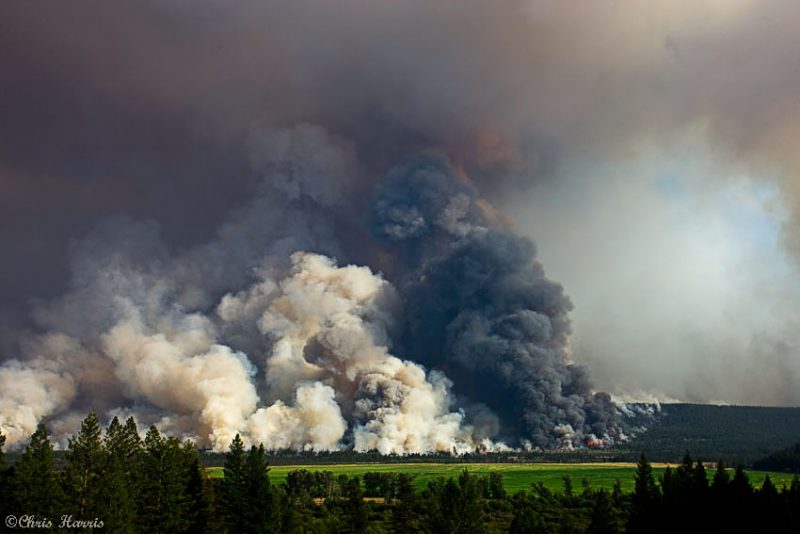 Moreover, being in the lee, with rapid runoff into its many lakes, rivers, streams, and creeks, the Chilcotin retains little moisture on and below the ground surface, making it a vast semi-arid region. Consequently, this inherent atmospheric and terrestrial dryness sets the stage annually for widespread fire hazards. 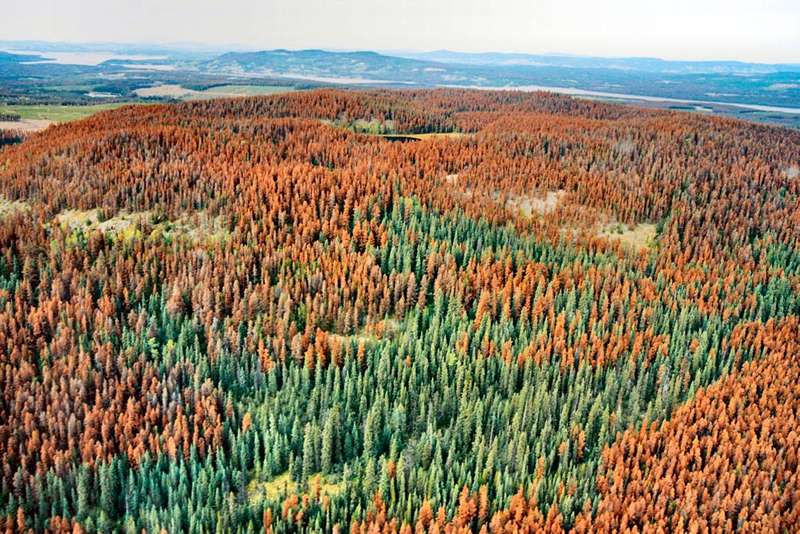 In recent years the advent of the mountain pine beetle scourge throughout most of southern British Columbia’s forests has added an element of catastrophic fire risk. This ubiquitous pest began its most recent rampage in the early 1990s, peaking within a decade and leaving fifty percent of the province’s lodgepole pine stands destroyed. This, in turn, provided a dry and seasoned fuel susceptible to any sparks, both human and especially those caused by lightning.

If one adds the normal forest floor fuel load that builds as needles or leaves dry and fall, and grasses and bushes that die and collect, the stage is set for a perfect storm: dead burning trees that set alight both ground and canopy and send flames galloping and thrusting up hills and along ridges. Add increasing winds generated by fast-rising air and no available rain or high humidity to combat the fire’s rush, and nature will take its course. Humans can do little to stop such conflagrations. It is on the edges of these infernos that we find Aaron Williams and his fellow rangers in mid-summer 2014. 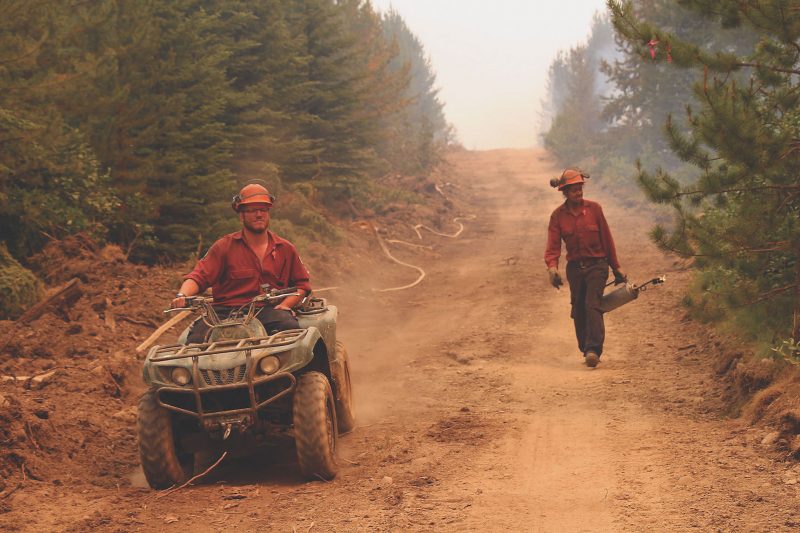 As a technician’s memoir, Chasing Smoke begins logically by describing the annual ranger training session, in this case for the author and thirteen others – “eleven guys and three girls” – one squad of many in a highly structured apparatus of expertise and governmental bureaucratic forest protection that has existed by and large for more than a century. In 1900 the Canadian Forestry Association was formed to save lands from fires, infestation, plant disease, bad logging practice, and other disrupters to industry. The aim was not today’s definition of conservation, but forestry professionals’ goal of maximizing the resource for harvest and market.

It matters not to Williams or his gang on the fire line what the purpose for saving today’s wooded territories might be. It is their job simply to help preserve as much as possible. This credo drives their lengthy and physically demanding pace and motivates their small team on each fire line assigned to it as they attack the blaze while protecting each other and their equipment.

Williams’ account of a day’s labour cutting, slashing, hosing, digging, tamping, hauling, trekking, not to mention riding on level ground or up and down steep slopes for weeks at a time, provides an absorbing account of a fire ranger’s ways. The job often entails blinding smoke, rising intense heat, filthy sweat encrusted clothing, cut hands, blistered feet, and always a huge and unrelenting appetite for food and liquids. 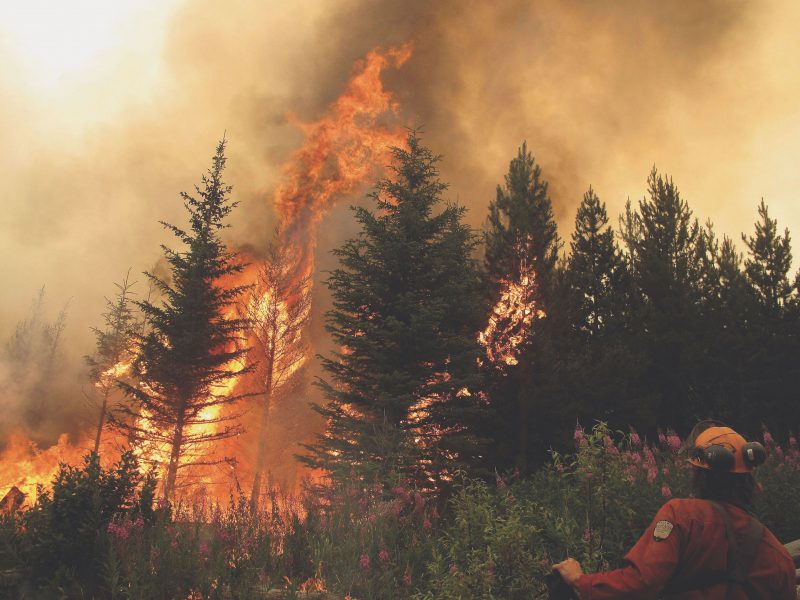 Then there are the air bombers that plunge flame retardant and roar down to spread tons of their orange chemical load directly onto an inferno. Those propeller-driven four-engine Lockheed Electras emerging like banshees from smoke-filled skies truly startle the rangers standing beside drop sites. They and the racket from adjacent ground machinery and other airborne equipment all contribute to the crews’ commitment to a massive province-wide undertaking each summer to curtail if not fully control the hundreds of wildfires alight on our frontiers. 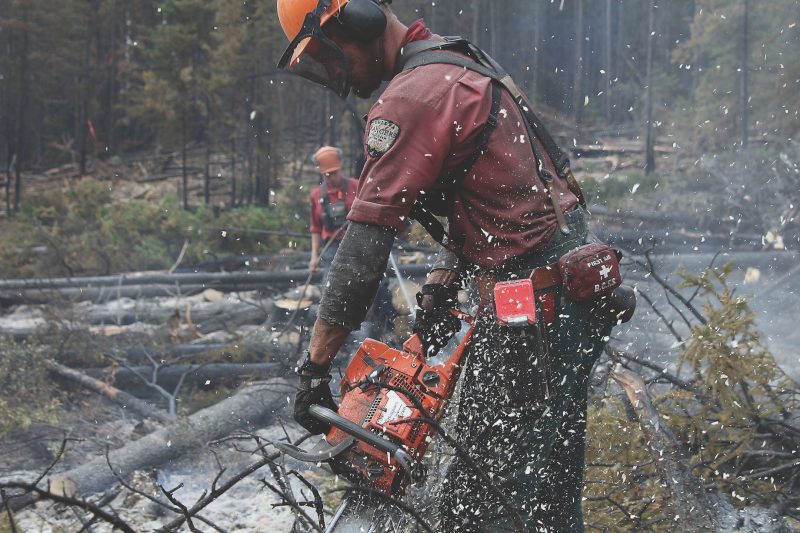 Their dedication and courage reminds me of many years ago when our university aviation club had members who flew helicopters each fire season. One fellow, an ex-naval pilot, did likewise in a converted Second World War Avenger torpedo bomber with refitted internal water tanks to douse forest fire outbreaks. I flew as an RCAF navigator during the 1950s and 1960s before embarking upon my career as a museum history curator. My own crew’s maritime patrol duties in the early sixties rarely switched from sea to land, but we did so when investigating and reporting forest fires along coastal mountains.

Other workmates I knew in the eighties and nineties had earned their way through college by working as rangers in fire season, including one brilliant museum, historic sites, and parks exhibits designer who always doggedly bore down to ensure that no loose ends remained. This was as much a legacy of his ranger experience as his art school training.

Living now in the southern interior, I witness every year the effects of huge forest fires: in 2003, for instance, we and 30,000 others were evacuated into Kelowna for two weeks from the benches and hills surrounding Lake Okanagan while aircraft of many types, along with men, women, and machines on the hillsides, attacked — often to no avail — the tree-candling, ridge-running blazes destroying timber stands, homes, trestles, and anything else ahead of them. 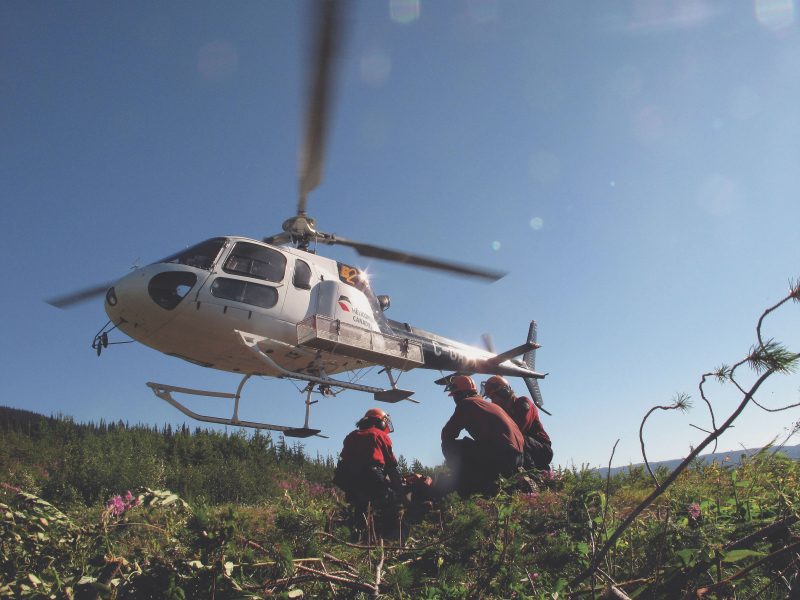 Helicopters overflew our golf community house by the minute to dip for water in a large ice age remnant pond bordering a fairway, then onto the fire, then back again, a true shuttle routine of all size choppers!

This year there were at least three large outbreaks near Kelowna, but nothing to match the epic tales of fire in central British Columbia, the worst season on record, and a large reason why Chasing Smoke is stuck near the top of B.C. Bestseller List. The demand for manpower prompted Williams himself to return for final session in 2017.

Truthfully, all who live in B.C.’s Interior are bound to have such tales of their own, making Chasing Smoke a great read, a timely memoir, and a swell gift for anyone in Canada.

Aaron Williams’ words and recollections, while presented so very well, become more dramatic, impressive, and poignant given both his first-hand frontline experience as a fire ranger and his training in creative non-fiction (MFA). And he adds greatly to his account by including a score of his own excellent colour field photographs depicting the team in action.

Williams has packed into an average size book an exceptional account of the impact of forest fires upon the frontline men and women who fight them each year in British Columbia. 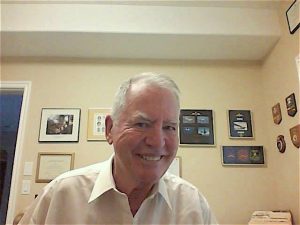 Dan Gallacher, Curator Emeritus at the Canadian Museum of Civilisation, is among Canada’s foremost museum historians and curators. His career spans four decades in research, acquisitions, and exhibitions. He completed his Ph.D., “Men, Money, Machines: Studies Comparing Colliery Operations and Factors of Production in British Columbia’s Coal Industry to 1891,” at UBC in 1979. Among his major permanent installations are the Modern History Galleries at the Royal British Columbia Museum, where he served as chief curator from 1969 to 1988, and the Canada Hall at the Canadian Museum of Civilization, when he was Director of History between 1988 and 2002. Along the way he worked with talented historians, archaeologists, ethnologists, designers, conservators, artists, educators, interpreters, webmasters, managers, and administrators. He is author of “The Canada Hall: A Museum Approach to Epic History” (2009), and he played a lead role in the “Making Medicare in Canada” website (2010). Retired and living in Kelowna, Dan continues to write, consult, lecture, and participate in both historical and museological studies both locally and nation-wide.