When Uganda is another planet 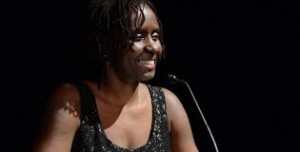 After learning that troops in her hometown of Gulu had opened fire on peaceful walk-to-work citizens protesting the high costs of fuel and food in 2011, Uganda-raised Juliane Okot Bitek has contributed ‘Stuff to do When Your Hometown is Burning’ to The Revolving City (Anvil $18). “There it was,” she explains, “a national army firing protesters with live bullets and it seemed important but wasn’t—no local or international news channel available to me was carrying it. It seems incredulous, but it wasn’t—the world around me was detached, no one was talking about it, nothing stopped to witness or commiserate.” As a Liu Scholar and Ph.D candidate at the Interdisciplinary Studies Program at UBC, Okot Bitek is one 51 mainly contemporary Vancouver poets who have read at SFU’s downtown monthly Lunch Poems series (the third Wednesday of every month) and contributed to the new anthology, edited by Wayde Compton and Renée Sarojini Saklikar. 978-1-77214-032-3 Okot Bitek was born in Kenya to Ugandan exiles.

Juliane Okot Bitek is writing a dissertation at UBC “on history, memory and alienation, how we understand
who belongs, who doesn’t, and the stories we tell to justify that.”  Her latest poetry project on the 20th anniversary of the 1994 Rwanda Genocide will be published in spring 2016.  Her writing can be found at julianeokotbitek.com