Weller turns up the heat 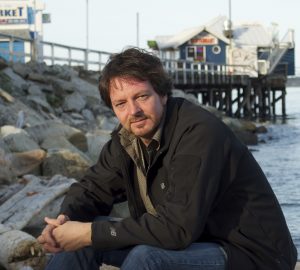 BATTERED AUTHOR: Duncan Weller, seen here at Sidney, says even the Writers Union of Canada has failed to adequately respond to the practices of Simply Read Books.

At the front of it is Duncan Weller.

Dimiter Savoff operates Simply Read Books. Duncan Weller is a writer and illustrator of children’s books who won a 2007 Governor General’s Award and the Ruth and Sylvia Schwartz Award in 2008 for his picture book The Boy from the Sun.

A former B.C. writer (Victoria and North Vancouver) whose father was the founding president of the University of Northern British Columbia, Weller has gathered evidence of Dimiter Savoff’s alleged track record of shoddy publishing practices for a deliberately damning blog.

Last year Publishers Weekly ran an article that also reported complaints of alleged mismanagement by Savoff’s company. Nine creators and one former Simply Read editor spoke to PW with allegations dating back to 2006. Those cited in the article included Sarah Lolley, the Montreal-based author of Simply Read’s Emily and the Mighty Om (August 2014), Montreal-based Anne Renaud, author of Missuk’s Snow Geese (2008), Toronto-based illustrator Qin Leng, BC BookWorld columnist Caroline Woodward, author of 2011’s Singing Away the Dark, Cynthia Heinrichs, author of Mermaids and Under the Mound (both 2011), Cynthia Nugent, Vancouver illustrator of I Want to Go to the Moon (2001) and Vancouver editor Colin Thomas. Dimiter Savoff, at Bologna children’s book fair, negotiates in 2014 with a Spanish author who now also has grievances against him.

Weller remains further frustrated by what he claims is an ongoing failure of personnel in funding agencies and organizations such as the Writers Union of Canada to adequately heed extensive evidence of improprieties—thereby enabling Savoff to continue to operate without paying people what they are owed by his imprint, Simply Read Books, founded in 2001.

The Publishers Weekly story in 2015 reports that Simply Read Books had thus far received “nearly C$1 million” from the Canada Council for the Arts, the B.C. Arts Council and Heritage Canada since 2004.

Savoff is not the first Canadian publisher to be accused of not honouring contracts, failing to pay royalties promptly or fairly, or infringing on copyrights–and just plain old hiding from creditors. But such failings are generally hushed up, often because authors feel foolish about having allowed themselves to be abused so easily.

It is similarly not in the best interests of the publishing industry overall–or the organizations that support publishing–to let the public know that scoundrels can endure and even thrive.

So Duncan Weller has gone public about the Battered Author syndrome.

He has not only recounted a long list of personal grievances–presented in a heated but astute barrage–he has also gone the extra mile and gathered a long list of grievances from others who feel Dimiter Savoff has acted well beyond the boundaries of propriety, of courtesy, or the law. Writers are not named on his site; only their allegations are represented—but he claims he can verify their identities if need be.

The Publishers Weekly article is easy to find on the internet. Meanwhile Duncan Weller’s “Battered Author” postings regarding the publishing practices of Simply Read Books can be found at: Art On The Edge

As Elie Wiesel put it. “We must take sides. Neutrality helps the oppressor, never the victim. Silence encourages the tormentor, never the tormented. Sometimes we must interfere.”

3 Responses to “Weller turns up the heat”