Spanish is the learning tongue 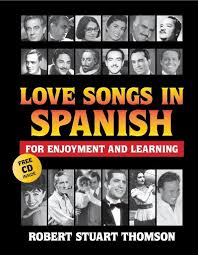 Writing in the December, 2016 issue of Hispania magazine, Elena Retzer of California State University has declared that Robert Thomson’s Love Songs in Spanish for Enjoyment and Learning (Godwin 2015) “is an inspired project that could successfully be used to add an enjoyable cultural component in many beginning, intermediate or even advanced Spanish language classes in the hands of a skilled teacher.” This 125-page book of lessons on how to learn Spanish uses twenty-four Spanish-language boleros, tangos, rancheras and other love songs (on an accompanying CD) as the guide. The reader and listener is invited to enjoy and understand such classics as Gardel’s “Mi Buenos Aires querido” and “El día que me quieras,” as well as Agustín Lara’s “Granada” and Ernesto Lecuona’s “Siboney” (both in Plácido Domingo’s rendition), as well as the birthday standard “Las mañanitas.” $25 plus postage ($5).

With a Ph.D in Romance languages from Yale, Robert Thomson of Victoria is also the publisher of two books by his great-uncle George Godwin who briefly homesteaded in the Fraser Valley. He has also made a third book by Godwin available via his internet site.

One Response to “Spanish is the learning tongue”