Spicy recipes for food and life 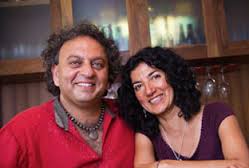 They started their first restaurant in 1994, opened a second one ten years later and began writing cookbooks in 2006 published by Douglas & McIntyre. Now, with a new Toronto publisher, Meeru Dhalwala and Vikram Vij (pictured at right) have released a third cookbook, Vij’s Indian: Our Stories, Spices and Cherished Recipes (Penguin Random House $35).

In its 7-page introduction Vij’s Indian intertwines family food stories with juicy stories about family dynamics. Are Vij and Meeru divorced? It’s hard to tell as they continued to share daily family meals in the same house even when Vij moved into a separate apartment. And of course the pair continue to run their restaurant, food business, and cookbook empire together.

Confusing? It was to their daughter Nanaki too, who, upon hearing her father had an apartment even though they would “remain a family”, asked: “Why are you both being so weird? Why can’t you do anything like normal parents? Why can’t you just say you’re splitting up instead of pretending you’re not?”

The family continues in the same household although oldest daughter Nanaki has moved to Montreal to attend McGill University. And Meeru spent a month with her ailing mother Omi, who suffered a series of strokes, to get her recipes, some of the “cherished recipes” in this cookbook. Born in India, raised in Amritsar and Mumbai, Vikram Vij studied hotel management in Salzburg, Austria before coming to Canada and opening his original 14-seat Vij’s restaurant in Vancouver in 1994 with his wife Meeru Dhalwala, born in India but raised in Washington, D.C.