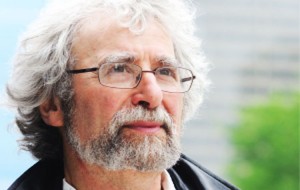 When we drive in a car listening to any piece of music we want to hear, from anywhere in the world, we are richer than kings.

This is new. So Tom Wayman has been thinking a lot about the power and ubiquitous presence of music in our every days lives, giving rise to Helpless Angels (Thistledown $20), a series of poetic meditations.

“The story behind the book,” he says, “is my realization that my generation is the first generation in human history that became able to hear anyplace our choice of music performed by someone else.”

Wayman grew up back when hearing music meant you had to make music yourself, or go to a particular place at a certain time to hear it. A sing-along was part of most adult parties. Music, including choir, was compulsory in school. Then came the LP, the 45 and car radios. Then came the radio disk jockey and the transistor radio and the jukebox. Then came 8-tracks and cassettes and Walkmans.  “All meant that music made by others could be heard in more places,” he says. “By then anyplace you went you could hear the music you wanted to hear when you wanted to hear it. So this book explores how this development has influenced our lives.”

Some poems honor certain musicians who have been important to his life; others capture something of the music found in nature. The online and print magazine for innovative music, Musicworks, based in Toronto, has an annual national literary competition focused on the sound of a place. Wayman’s winning poem for its Sonic Geography literary contest deals with the differences in the music of wind in the subalpine and on the valley floor, and the different “musics” that are audible while a creek descends the mountainside toward the Slocan River.

Some poems are song-like; others are road-poems, others mourn the death of a dear friend. The book’s title poem was originally published in The Hudson Review.

“We’re the first people in the long cavalcade of human history ever to have access to so much music that we don’t have to make ourselves, or go to a special place at an announced time to listen to,” Wayman says.

“The obviousness of this fact makes it invisible to, or taken for granted by, most people. To me, having grown up during the era when access to music was so fundamentally changing, this fact is both a continuing inspiration and a wonder.” 978-1-77187-131-0