Two pieces of cloth and freedom 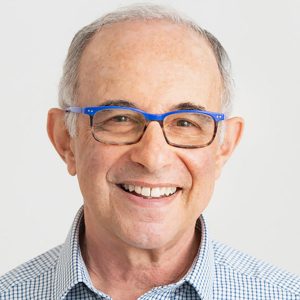 “For as long as I can remember, I have thought of the Holocaust every day.” — Joe Gold

David Goldberger always knew he had a story to tell and remember; he just never found a voice for it. It wasn’t until his Vancouver-raised son, Joe Gold (right) was in his seventies that his father’s story of faith, perseverance and family love found its way into a book, Two Pieces of Cloth, One Family’s Story of the Holocaust (Page Two $21.95).

After the process of liquidating Jewish businesses had included confiscation of both the home and textile business of the Goldberger family in Spisske Vlachy, in Eastern Slovakia, the Slovak government proceeded to solve their unemployment problem by deporting Jews in the spring of 1942. In keeping the cleansing philosophy of so-called Aryanization, the first train to Auschwitz from the Poprad transit camp departed on March 25, 1942 with 1,000 unmarried Jewish women between the ages of sixteen and forty-five in cattle cars. Family transports commenced on April 11. Jewish males dispatched to labour battalions in 1943.

When German troops occupied Hungary in March of 1944, bribes were less viable to avoid detention. Almost half a million Hungarians were transported to Auschwitz-Birkenau between May 15 and July 9.

David Goldberger first worked as a slave labourer in 1944 in one of the 32 factories of the Manfred Weiss Steel and Metal Works, which had been taken over by Nazi Germany. The Weiss family had been allowed to immigrate to Portugal but their enormous art collection was confiscated. Goldberger was one of the earlier groups of Jewish Hungarians to be sent to Auschwitz. After three days and two nights in a cattle car crammed with 100 people sharing a single bucket for waste and a single pail of water, Goldberger arrived at Auschwitz on April 20, 1944.

Dr. Josef Mengele directed him to the right. He could live. All his possessions were confiscated. Goldberger stood naked with the other lucky ones while their heads were shaved and the crevices of their bodies were searched for valuables. He was transferred to Bergen-Belson on February, 17, 1945. Exactly 303 days after he boarded the cattle car, when he was finally liberated from Bergen-Belsen among 60,000 ghostly inmates, David Goldberger—known as Deszer, or Deszy—weighed sixty-five pounds.

Yugoslavia was the only government that came swiftly to rescue its Jews. Seemingly too skeletal to travel, Goldberger was told by the camp’s liberators to wait for the arrival of a Slovakian legion. The concentration camp was rife with typhus. The risks of remaining were lethal. He opted to take flight with a group of men to reach Hanover, 50 kilometres away, in northwestern Germany. It was there he was given two pieces of woollen cloth that would enable him to barter his way closer to completing his quest.

In Two Pieces of Cloth we learn that several thousand Jews fled from Czechoslovakia to Hungary aided by Rabbi Shmuel Dovid Ungar. In the voice of David Goldberger, his son Joe Gold recounts his father’s successful return to Budapest after the Holocaust to find his wife Aurelia and their son, Andrew, who had been in hiding with false Christian identities.

Andrew was disguised as a girl. “Andrew’s hair was long and beautiful. It was imperative that Andrew be dressed as a girl in case we were ever stopped by the gendarme. They would check any suspicious boys for circumcisions.”

Although the story is mainly told from the perspectives of the separated couple, it opens with Joe Gold, as child, discovering a book of concentration camp photographs hidden in his father’s fabric store. This rare album that Joe Gold first saw in 1952 went missing for seventy years until Joe Gold traced its origins just before Two Pieces of Cloth went to press.

For many years the family operated Gold’s Fashion Fabrics at Granville and 11th Avenue in Vancouver.