Before a full house at the Vancouver Public Library, Shelley Wright, author of Our Ice Is Vanishing, delivered a stirring speech about the Inuit, the Arctic and climate change. 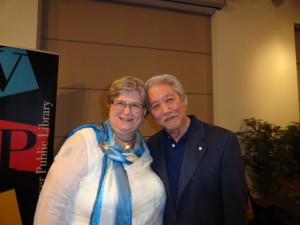 Over thousands of years, she said, the Inuit have earned “the right to be cold” to retain their health.

Here is what Shelley Wright said after she received a $2000 cheque from presenter Anne Chudyk, George Ryga’s sister.

First of all I would like to acknowledge that we are on the traditional unceded territories of the Musqueam, Squamish and Tsleil-waututh peoples. Thank you to the First Nations of Greater Vancouver for allowing us to be here.

Next, thank you to

Congratulations to Wayson Choy for your amazing contribution to Canadian literature and this well-deserved recognition for a lifetime’s achievement. In 1967 Canada celebrated its 100th anniversary as a nation. In that same year, partially to celebrate that event, George Ryga’s first and most famous play “The Ecstasy of Rita Joe” was commissioned and presented at the Vancouver Playhouse. The play was inspired by the death of a young Aboriginal woman in one of Vancouver’s poorest neighbourhoods. The play tells the story of a young Shuswap (Secwepemec) woman who comes to the city looking for a better life, but instead finds herself on “an odyssey through hell” (in Ryga’s words) ending in her rape and murder. The play starred Frances Hyland as Rita, August Schellenberg as her friend Jaimie Paul and Chief Dan George of the Tsleil-waututh Nation as her father. The play has become an iconic Canadian depiction of injustice and a representation of George Ryga’s passionate commitment to social awareness.

In another two years Canada will be celebrating its 150th anniversary and George Ryga’s play will be 50 years old. And yet his depiction of the treatment of a young Aboriginal woman could have been written today. From 1980 to 2012 more than 1200 Aboriginal women have gone missing or been murdered in Canada. This national disgrace is closely associated with the experiences of many Aboriginal women and men in residential schools, as we were all just reminded of during last week’s release of the Truth and Reconciliation Commission’s Summary Report. The treatment of the more than 150,000 First Nations, Metis and Inuit children stolen from their families between the Confederation of Canada as a nation in 1867, until 1996 when the last school closed, has been described as “cultural genocide”. I would not use the qualifier “cultural”. It was and is genocide.

Facing these truths is hard. But it is essential. I am proud to receive an award inspired by the work of a great Canadian author such as George Ryga. Bringing awareness to Aboriginal issues in the Arctic was the inspiration for my own book.

The impact of European and Canadian penetration of the North on its people and environment has been written about before. But the Inuit’s point of view often goes missing. I wrote the book partly to tell of my own steep learning curve about the Arctic and its people, but also to give the Inuit point of view in their own words as much as an outsider like myself can do.

Colonization is now twinned with climate change in bringing enormous changes to a part of Canada most of us know almost nothing about. It’s not just about polar bears, it’s also about a world of ice inhabited by people who have earned over thousands of years “the right to be cold” in the words of another great Canadian author and Aboriginal activist, Siila Watt-Cloutier. And yet Inuit find themselves increasingly resisting the demands of southerners or qallunaat like ourselves who bring their own agendas to the Arctic. Whether it’s about oil and gas, mineral extraction, uranium mining, military strategy, sovereignty claims or well-meaning environmental activists focussing on seal hunting and polar bears, the knowledge of the Inuit themselves can too often be drowned out. Many Inuit find themselves overwhelmed by poverty, substance abuse, violence, poor health, hugely expensive food and shelter, and the accompanying hopelessness to the point where young Aboriginal boys and men kill themselves at 30 times the Canadian average. Young Inuit are more likely to commit suicide or end up on the streets or in jail then graduate from high school. I was witness to some of this tragedy and learned to leave some of my own southern expectations behind.

But this bleak picture is also changing. Inuit are determined to both keep their Inuit Qaujimajatuqangit, or traditional knowledge, as well as developing a better future for themselves and their children. They have also been leaders in creating awareness of climate change, which will affect all of us. Reconciliation is about both learning and accepting the truth of our history, but also in listening to and respecting the knowledge of Aboriginal peoples on whose land we live.

Beneath the debate over climate change, Inuit rights, and Canadian sovereignty in the Arctic lies a rich and complex mosaic of geography and history. Much of this intersection between space and time is laden with passion, death, ignorance, and loss. It is also powerfully beautiful. . . .

[T]he most barren landscape can hide small miracles of persistent flowering beauty. The long dark of winter can slowly lighten into a flush of pink and lavender where before there was only cold dark snow. . . . For the adventurous traveller or searcher for wilderness beauty, the Arctic is a place where belugas sing like canaries and birds called thick-bill murres dive into the sea depths as easily as tiny whales. For most people living in “the South”, the Arctic is an exotic space on the edge of our maps of the modern world. For Canadians of European descent, both English and French, our belief in the conquest and control of a vast hinterland has determined who we are as a culture and a people – as a sovereign state, if not as a unified nation. This in turn fuels the Canada government’s desire to establish secure claims of legal sovereignty over the Arctic up to and include the North Pole.

For the Inuit, this is their home.

(Excerpts from Wright, Our Ice Is Vanishing/Sikuvut Nunguliqtuq: A History of Inuit, Newcomers, and Climate Change (McGill-Queen’s University Press, 2014) pages 298 and 299.