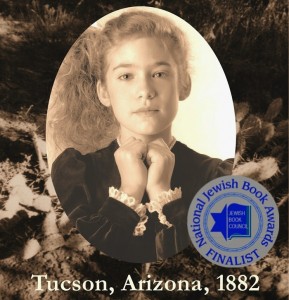 Tucson Jo by Carol Matas is inspired by the first Jewish mayor of Tucson.

Although Manitoban Carol Matas has more than forty titles, she turned to her friend Morri Mostow on Gabriola Island to produce Tucson Jo.

Although Carol Matas had a track record for writing award-winning stories pertaining to Jews and the holocaust for children and young adults, mainstream commercial publishers rejected her manuscript for a book inspired by the life and times of the first Jewish mayor of Tucson named Charles Strauss. That’s when she turned to former Reader’s Digest writer Morri Mostow to publish her novel for middle grade readers, Tucson Jo (Fictive Press, 2014), set in the Territory of Arizona in 1882. “Morri offered to publish the book because she believed in it and loved the story,” Matas has recalled. “For me, choosing to publish with Fictive Press was a huge departure, since Fictive is a small digital print-on-demand publisher and therefore that meant an entirely new business model for me. Once we’d agreed on a contract and made it all official, we went to work. Morri pushed me on some story points—and here I thought I might get off easy because she was my friend but it was quite the opposite. That’s when I suddenly rewrote the entire back half of the book and it all came together. Or so we thought. Morri, of course, did the heavy lifting re the publishing, the cover, the review mailings, etc. But all decisions were made together. When we finally saw the final version we were really happy with the result, although we were unsure how this experiment would work out.” Carol Matas opted for a digital publisher based in B.C.

Loosely based on the life of Charles Stauss, the historical novel sees the world through eyes of a pioneering mayor’s daughter, fourteen-year-old Josephine Fiedler. She resents her father for uprooting their family and taking them to the wilds of Arizona to preserve his health. It is only when her father’s bid for the mayorality of Tucson results in anti-Semitic attacks that she begins to fully appreciate what it means to be a Jew. Her best friend’s father is also running for mayor. She begins to understand her father, as both a man and a Jew, and realizes her own relatively peevish position as someone missing Boston is secondary to the maintenance of social ideals. “Without law, without order,” her father tells her, “there is no freedom.”

Born in Winnipeg in 1949, Carol Matas received her B.A. (English) from the University of Western Ontario and she is a graduate of the Actor’s Lab in London, England. She has been a Creative Writing instructor for the Continuing Education Division of the University of Winnipeg.

Carol Matas’ literary awards include the 2014 Helen and Stan Vine Canadian Jewish Book Award in the youth category and a 2014 Sydney Taylor Honor Award for Older Readers (from the Association of Jewish Libraries), both for Pieces of the Past: The Holocaust Diary of Rose Rabinowitz (Scholastic Canada). Her books have been published all over the world in more than a dozen languages, and have been best-sellers in Japan, Germany and Spain.

Mostow and Matas will now launch a new, adult thriller series to be set in California, starting with Palms Springs Paranormal slated for release in autumn of 2015.

Fictive Press is a division of BizNet Communications, a corporate and marketing communications firm that Mostow and her husband, Doug Long, have been running since the early 1980s, first in Quebec and, since 2005, on Gabriola Island, BC. Visit
FictivePress.com for info.